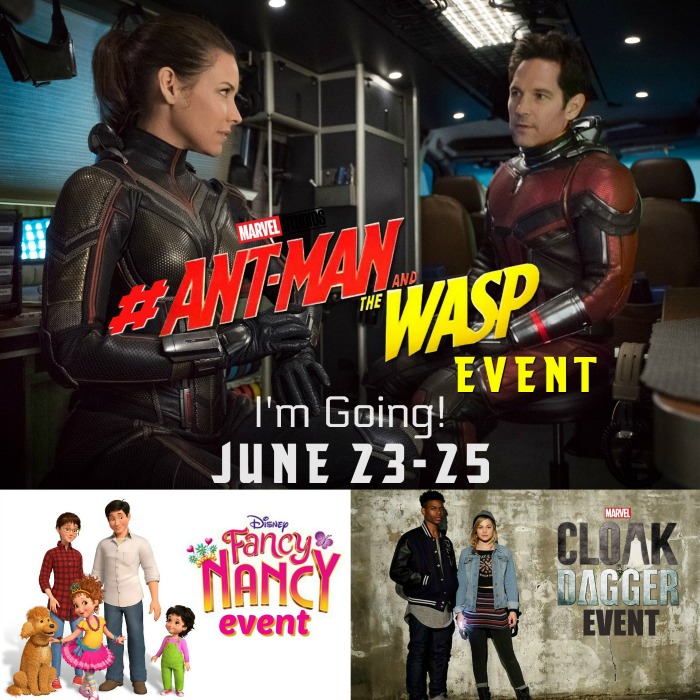 The week has arrived. I have this little thing on the calendar. Tiny actually.

I’m talking about #AntManandTheWaspEvent! Follow along as I head to Hollywood for an incredible action-packed weekend that includes attending the Ant-Man and the Wasp press junket, along with a little bit of Cloak and Dagger and Fancy Nancy fun too.

For Marvel fans, this is one event you don’t want to miss. I’ll be live-tweeting all the details about my interviews (YES! INTERVIEWS!) and time spent in Southern California.

(Disney, Marvel Studios, Freeform & Disney Junior have invited me to California on an all-expenses paid trip, in exchange for our coverage of events. As always, all opinions are my own.)

Here’s what it is on the itinerary…

Ant-Man and the Wasp Press Junket 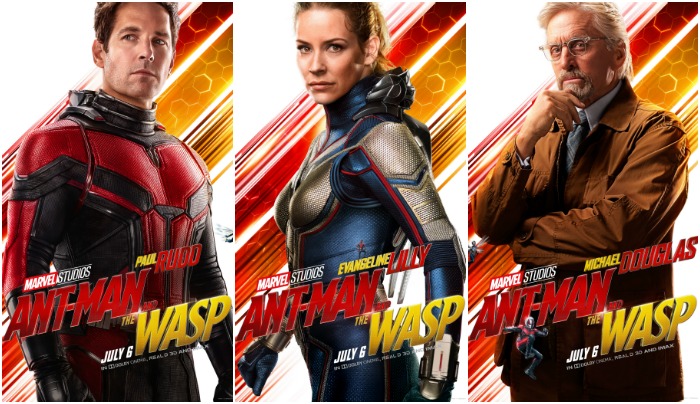 Ever since we all saw Infinity War (you have seen it, right?), people have been theorizing. A lot of those theories and unanswered questions have to do with Ant-Man for obvious reasons (I won’t spoil it here, but really, you need to see it). To be among the first to see Ant-Man and the Wasp THIS WEEKEND and finally get those answers is a dream come true!

Not only will I be screening the movie in a matter of days, but I will be attending the Ant-Man and the Wasp press junket, where opportunities abound. Chief among them – interviews with the cast!

While I wish I could have seen Michelle Pfeiffer on this list, my jaw dropped as I realized I would meet Paul Rudd who I have adored since he dated and married Phoebe in Friends. Let’s not forget Evangeline Lilly, an actress I first saw on the epic television show Lost – incredible!

Hollywood royalty. That’s what I think about when I hear the name Michael Douglas.

This week will be full of memories.

From the Marvel Cinematic Universe comes ANT–MAN AND THE WASP, a new chapter featuring heroes with the astonishing ability to shrink. In the aftermath of CAPTAIN AMERICA: CIVIL WAR, Scott Lang grapples with the consequences of his choices as both a Super Hero and a father. As he struggles to rebalance his home life with his responsibilities as Ant–Man, he’s confronted by Hope van Dyne and Dr. Hank Pym with an urgent new mission. Scott must once again put on the suit and learn to fight alongside the Wasp as the team works together to uncover secrets from the past.

Marvel Studios’ ANT-MAN AND THE WASP opens in theaters everywhere on July 6th!

Want a chance to win a private screening of Ant-Man and the Wasp? Keep on reading… 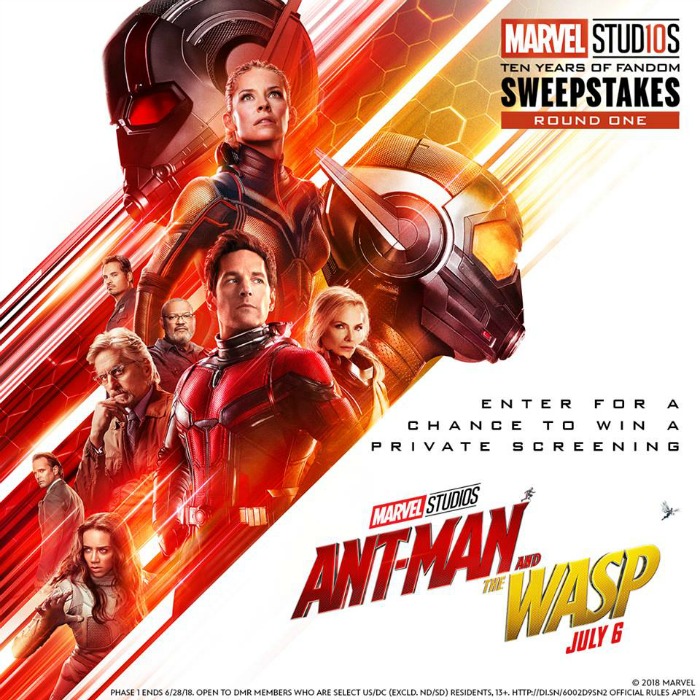 Suit up today and enter the Marvel Studios’ 10 Years of Fandom Sweepstakes for a chance to win a private screening for you and up to 100 friends to see Marvel Studios’ Ant Man and The Wasp at your closest Regal Cinema!

The Marvel Studios’ 10 Years of Fandom Sweepstakes will run through October 31, 2018 with new heroic prizes announced on June 29 and July 31! Enter here. 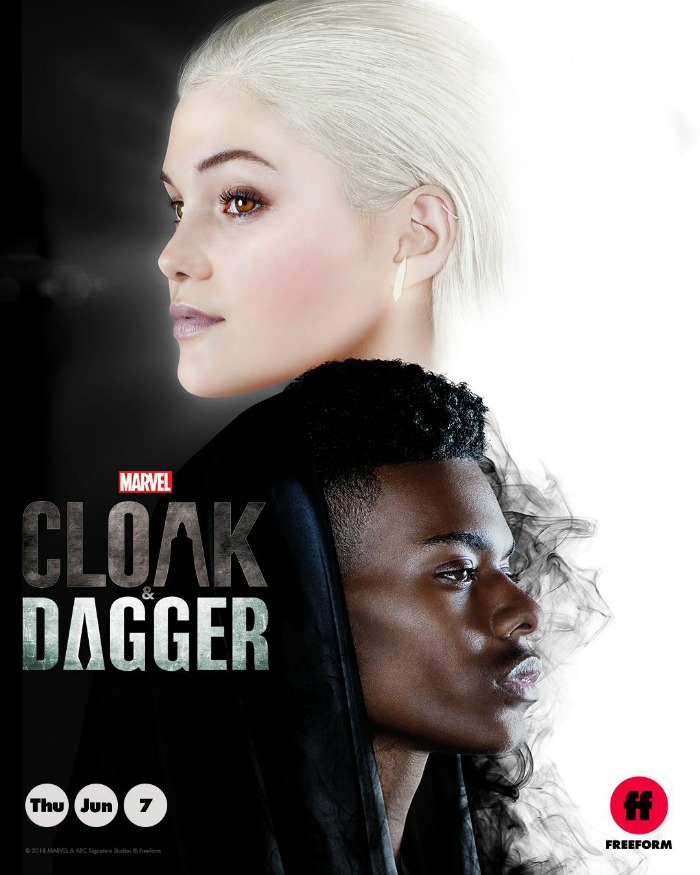 Have you started watching Marvel’s Cloak & Dagger, on Freeform?

I just started watching this intense Marvel drama, and after just one episode I was intrigued and hooked.

While not for young children, this new television show is already showing off by breaking records at Freeform! I can’t wait to interview some of the cast and executive producer while I’m in town.

Thursdays on Freeform at 8pm/7c. 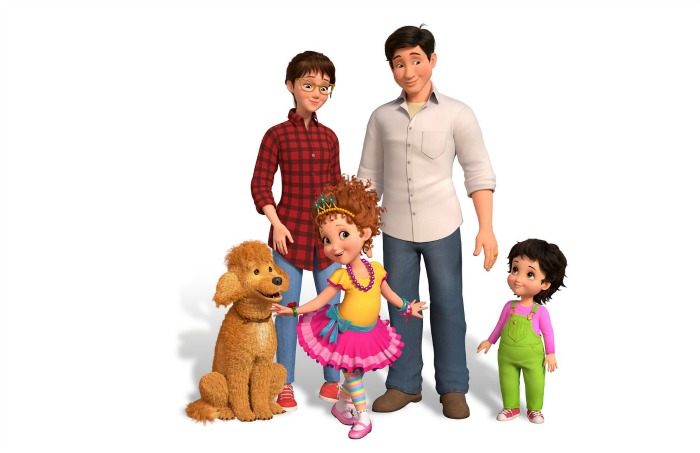 This trip to Hollywood is turning out to be magnificent (that’s fancy for awesome).

If you recognize the writing style of that last sentence,  you might be a mom with a quite a few Fancy Nancy books on her shelf. I know we have almost every single book, so I couldn’t contain my excitement when I realized that a tea party was on the itinerary, one that includes screening the brand new Disney Junior animated show and interviews.

Fancy Nancy Tea Party? Yes, and it will fabulous no doubt!

“Fancy Nancy” premieres FRIDAY, JULY 13 (11:00 A.M. EDT/PDT), on Disney Junior, DisneyNOW and Disney Junior VOD. Based on the New York Times bestselling book series by Jane O’Connor and Robin Preiss Glasser, the animated family comedy centers around six-year-old Nancy, a high-spirited young girl whose zest and enthusiasm for all that is exquisite – including language, nature, art and color – transforms the ordinary into the extraordinary.

So much excitement! Be sure to to follow along Saturday, June 23rd – Monday, June 25th for the Ant-Man and the Wasp press junket and more!