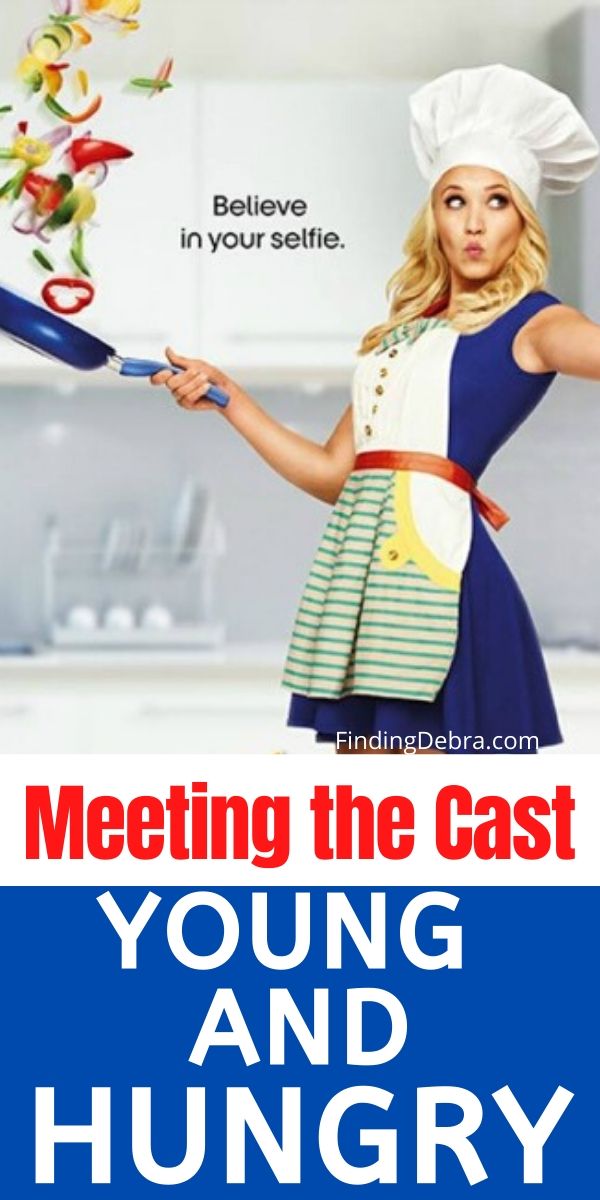 Have you seen the new show Young & Hungry which premiered on ABC Family earlier this summer? If not, check it out every Wednesday at 8:00pm ET/PT on ABC Family.

Not only did I get the chance to sit down and view an episode during a 4-day press trip recently, but I actually got to eat breakfast with the cast of Young & Hungry. While it was mostly “they” who were “young” and “I” who was hungry, it was such an enjoyable way to start the day. 🙂

Disclaimer:  Disney, Marvel, Dreamworks & ABC Family sent me to Los Angeles on an all-expenses paid press trip, in exchange for my coverage of these events, including this mixer with the Moms of ABC Family. All opinions are my own.

Meeting the Cast of “Young and Hungry” But first, here’s a bit about the new show:

In Young & Hungry, two worlds collide when Josh (Sadowski), a wealthy young tech entrepreneur, meets Gabi (Emily Osment), a feisty young food blogger, looking to be his personal chef. Gabi is desperate for the job and must prove herself, mostly to Josh’s aide (Lee), who prefers a famous chef for the job.

When Josh enlists Gabi to prepare a romantic meal for him and his girlfriend, the dinner goes awry and Gabi finds herself in a very awkward position. With the help of her best friend Sofia (Carrero) and Josh’s housekeeper (Whitley), Gabi turns a difficult situation into an opportunity for employment and maybe even love.

Yes – isn’t it a great fit that the show’s main star is a food blogger? I certainly thought so. The series is based upon the life of real San Francisco food blogger Gabi Moskowitz.

Yes – did you know you can get your own copy of the Young and Hungry Cookbook? Check it out –> Your Complete Guide to a Delicious Life. During the press trip we stayed at the Sheraton Universal Hotel right on Universal Hollywood Drive and close to the studios. Our first full day in Los Angeles and we needed to start off right, with a good meal. And we did so right in the hotel restaurant.

So what better way than to meet up with the cast of Young & Hungry…..talk food, celebrity, fashion, and did I mention food?

This was so much better than the usual press interview set-up. Groups of bloggers with various actors at different restaurant tables….coffee, bagels, etc. It provided such an easier format to really get to know them. Oh, and did we get to know each of them!!!

Get the Scoop on the Young and Hungry Cast

Most will easily recognize two names right away associated with the show. The first is Executive Producer Ashley Tisdale. The second, and star of Young & Hungry, is Emily Osment, who you’ll recognize from her 5 years on “Hannah Montana”.

While Emily Osment plays the role of a food blogger, can she cook in real life?

FACT: That would be NO! In fact, Emily lied and told them she knew how to cook. LOL

It’s clear she loves the cast and her favorite thing about them is that not everyone has done a sit-com before. It forces her to get out of her element.

One thing that I personally love is that “Gabi’s” wardrobe is “fashion on a budget”. In fact, Emily told us that you can emulate her style easily from everyday clothing stores like Gap and Forever 21.

But can we talk about the aprons for a minute?

The aprons featured on the show are incredibly fashionable and trendy. So how can we get our hands on them? Well, we can’t, at least right now. They have incredible seamstresses who make all the aprons. I’m imagining this could be a “Young & Hungry” kitchen line! Hint. Hint. While Emily Osment was very beautiful, it was clear that the guys would have me laughing non-stop, as you can see in this picture. Right off the bat, Rex Lee had me in stitches. Rex Lee (who you might recognize from “Entourage”), describes “Young & Hungry” as “sweet but has a heart and is a little edgie”. HINT: It’s that edgie part that certainly has this show geared towards older teens/young adults.

Rex describes wanting to act ever since he was a little kid, but it wasn’t exactly a respected profession in his family, so he didn’t pursue it until college. But he is making everyone laugh now on the show.

Rex says with regards to acting, “It doesn’t matter if your character ever eats a pork chop or not, you NEED to know HOW they would do it. It can’t help but inform what you do.”

Meeting David Holden, the creator and executive director of “Young & Hungry”, was a real treat, and I mean that in more ways than one.

Just imagine 5 bloggers listening to David describe Scandinavian Princess Cakes layer by layer. Oh yes, he did. They are his favorite dessert and have even been featured on the show.

Food is central to this show and it was seemingly inevitable that David would create a food show as he lived in France and was in the Peace Corps in Thailand. It’s clear that both cultures have influenced him considerably.

He thought it was important for the characters in “Young & Hungry” to enjoy eating. Especially for their audience…girls. And so you see the characters do exactly that. I’m very happy to hear someone in the industry talk about this important topic.

Oh, and FYI…he wants to create a cookbook of international comfort food! He’s promised me a certain recipe and I’m determined to get it soon! 🙂 Stay tuned!

Just to prove my point that the female characters enjoy eating, Aimee Carrero admitted to purposely messing up a “take” on film so that she could have another piece of the Scandinavian Princess Cake! Seriously! Love her!

At home, she’s more of a baker than a cook and surprised the crew with a batch of brownies recently…..she described them in detail and our mouths were watering. Now Jonathan Sadowski surprised us all by walking in on crutches, which is why he is sitting down in our group picture.

After watching the show and then meeting Jonathan in real life, I’d love to see more of Jonathan’s real personality shine through in the character. He was such a hoot to be around. He’d even poke the blogger sitting next to him while talking. What a real guy!

And any man that will talk about his mom, well, he had me right then. New fan! He talked about visiting his mom in Chicago and yet she didn’t know he was coming. It was a surprise and when he walked in, well, he thought he gave her a heart attack. Yikes!

What a great cast! “Tune in tonight (Wednesday) at 8:00pm ET/PT on ABC Family. Jesse McCartney will be guest starring on this Wednesday’s (7/30) episode.