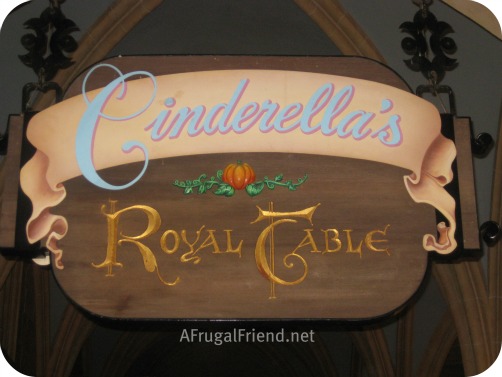 Six Months. Yes, six months before your trip is the day you need to contact Walt Disney Dining to make an ADR (Advanced Dining Reservation) for the most coveted restaurants. Right when the phone lines open. Only trouble is, our trips to Disney are never planned out that far in advance.

While we’ve been able to eat at some AMAZING Disney World restaurants, Sanaa at Animal Kingdom Lodge, California Grill, Chef Mickey’s and more, there’s been one restaurant that we’ve never ever had the opportunity to visit…UNTIL NOW!

I’m talking about Cinderella’s Royal Table, which is located within the Magic Kingdom theme park at Walt Disney World. While you can make an ADR, admission to the theme park is required for entry, so be sure it’s a Magic Kingdom day for your family.

This February, we followed my husband to Orlando on a business trip.  It was a last minute decision.  More out of curiosity than anything, I checked to see if there were any openings at Cinderella’s Royal Table.  What were the odds?  It was the week of our trip.  I’m sure I never expected to see……. 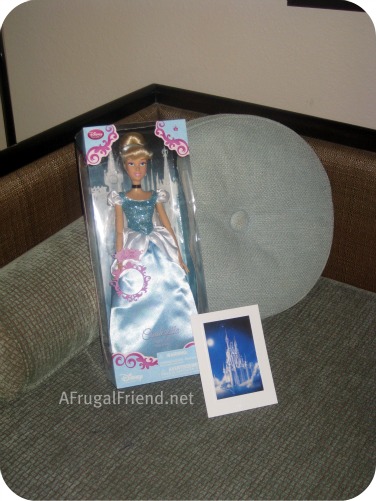 Now this was a huge secret.  Not only our exciting dining appointment, but the trip to Disney World!  All our daughter knew was that we were going along with Daddy on a business trip.  Her response…..”Boring”.  Little did she know.  🙂  She got her first clue as she stepped off the plane and immediately recognized Mickey in the airport.  A fun start to the trip.

Mommy, being the Disney nut she is, always has something up her sleeve.  One morning, someone woke up to this……..it appeared that Cinderella’s friends (the birds and mice, even Gus-Gus) had dropped off a special something.  Cinderella had personally invited her to breakfast.  Oh, she was so excited.  Truth be told, Mommy was too.  🙂

I’ve read many a blog post blasting parents for bringing Disney souvenirs from home, instead of buying them while on the trip…..and I think it’s so sad.  A souvenir is something to make a trip memorable.  It doesn’t have to be purchased in a “store” while the kids are watching to be memorable.  Parents might bring from home for economic reasons.  In fact, two of our favorite “Disney” souvenirs we always bring back are our pirate eye patch and princess wand that lights up (from Target).  Totally inexpensive.  One silly eye patch brought hours of fun and great pics with Pirate Goofy.  The princess wand has been used at home and on every single trip in the evenings…….she thinks she changes the colors of the castle.

Be creative.  Every time we have an ADR with characters, our 4 yr old receives an invitation of some sort.  One time from Winnie-the-Pooh.  Another time from Princess Aurora. Those letters are “souvenirs” too, and hold some of the best memories for our family.  So, think ahead and tuck away a few special items (or invitations) in the luggage…..and don’t worry about the ones who criticize. 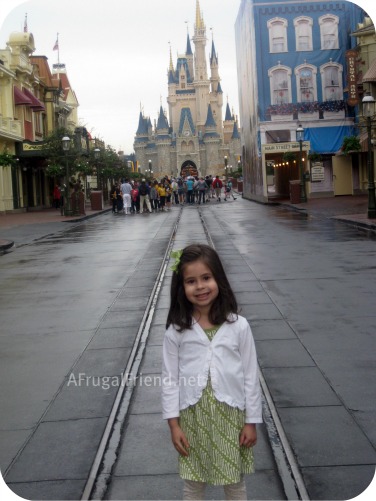 One of the perks about having an early morning reservation, is that Main Street is practically empty.  There is a special line for you to enter if you have a reservation before the park opens for the day.  Take advantage of this for photos.  Disney photographers are there already waiting for you too.  We would have had Main Street to ourselves but for a school group ahead of us.  I love this picture. 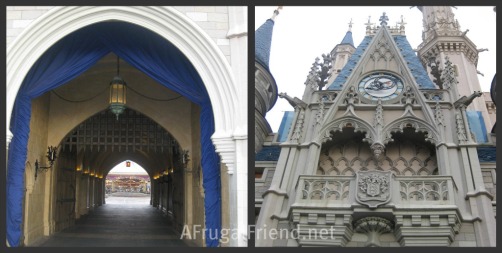 Main Street is always one of my favorite things about the Magic Kingdom.  Having the ability to stroll through the street without a crowd……priceless.  We took our time approaching the castle.  Oh, did I mention that Cinderella’s Royal Table restaurant is IN THE CASTLE?  Yes, Cindy’s Castle! 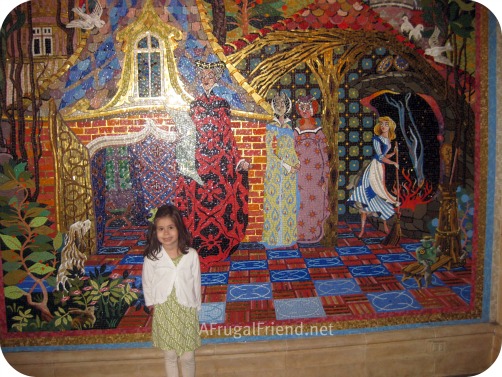 As we walked through the Castle, we spotted this beautiful mosaic……a scene from Cinderella. 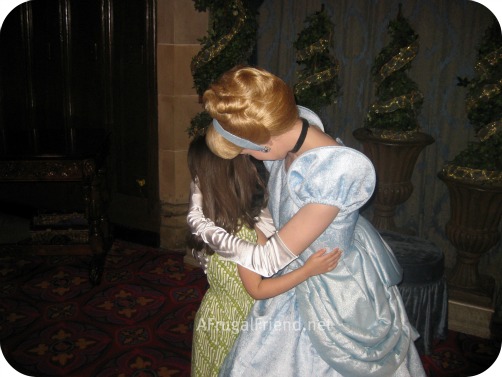 We checked in on the backside of the Castle, and were whisked away to a Royal Hall, complete with magnificent staircase, Royal Knight in Shining Armor, and Cinderella herself.  The meeting place is the only time you’ll see Cinderella during this special dining event. 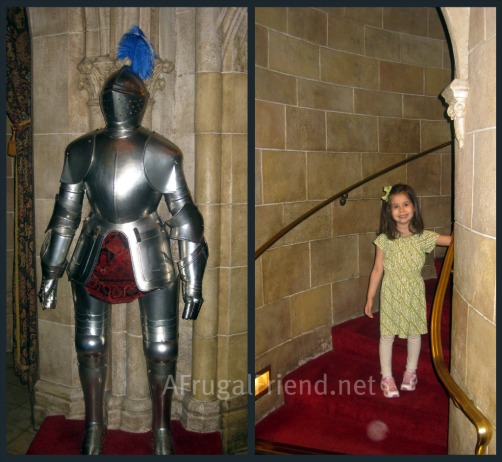 In addition to the meal, the prepaid dining package includes:

This is an added bonus as many of the restaurants offer this for an additional price. 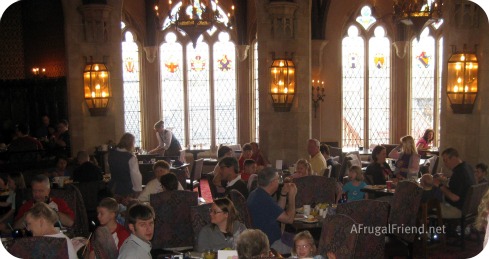 We were then invited upstairs, so off we went up the red carpeted stairwell to our dining area, straight out of a fairytale.  Overlooking Fantasyland, it’s not a huge restaurant (thus the demand for reservations), but it’s magnificent. 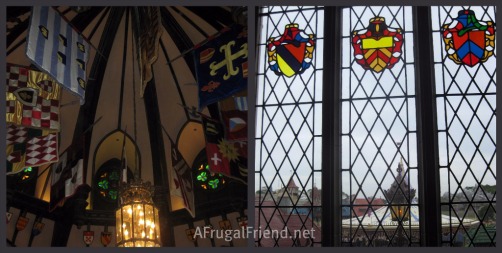 The windows are covered with coat of arms.  The high ceilings are filled with medieval flags.  The Cast Members….dressed for the part.

The food is pre-plated and there are a few options to choose from.  No worries, as you can ask for more if you are still hungry.  But I’ll be honest, it wasn’t the food that we were there for.  🙂 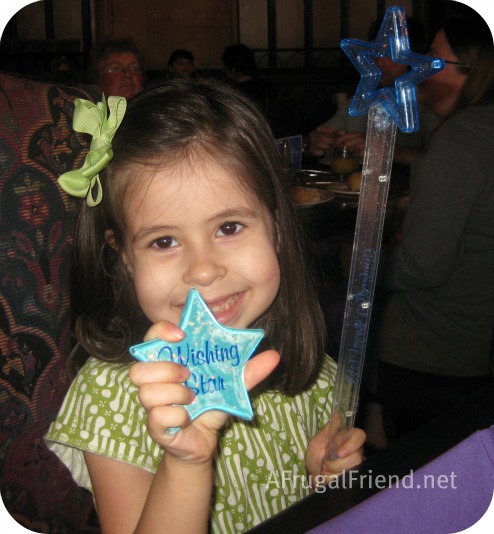 We were there for the Disney Magic!

Our daughter received a special Cinderella’s Royal Table Wand and a real Wishing Star once she was seated.  Can you imagine how exciting it is to get a real Wishing Star?  Every so often there would be an announcement to make a wish.  Oh, and my girl did!

Wish #1: She wished that Belle would appear – and guess what, Belle was introduced shortly thereafter.

Wish #2: She wished that she could ride The Jungle Cruise ride in Adventureland.

WELL, not only did we find our way over to The Jungle Cruise, but the captain of the boat let my daughter DRIVE the boat the ENTIRE trip (out of the blue).  Um, I’ve been coming to Disney forever, and I’ve never seen that.

I’m beginning to think I should steal that Wishing Star!  🙂 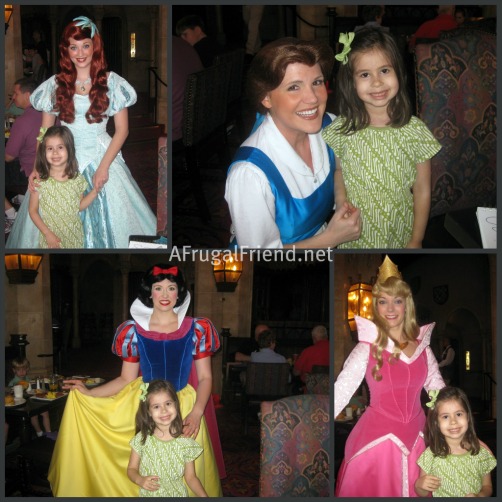 One by one the princesses were introduced.  Snow White, Aurora, Ariel, and Belle.  Each came by the table for a quick visit and to sign autographs.  I do owe a special thank you to Ariel.  You see my daughter was really hesitant about starting swim lessons.  So, Ariel talked to her about how Prince Eric couldn’t swim and it was important to learn.  Thank you Ariel! 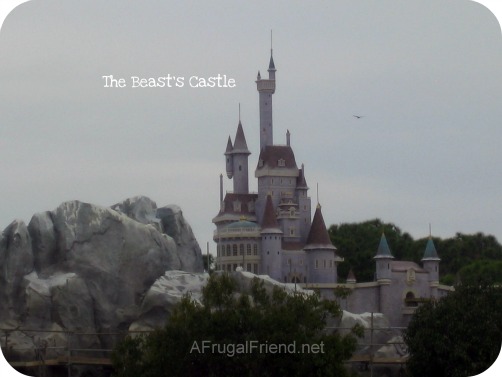 Of course, since we were on the second floor of Cinderella’s Castle, I just had to go over to the window and glance at the new Fantasyland construction. Yes, this is the Beast’s Castle……I’m so excited.

That will be the next castle we’ll have to make a reservation for! Six months out. 🙂

You can dine at Cinderella’s Royal Table, which is a Character Dining Experience, for Breakfast, Lunch, and Dinner. Prices are Fixed at $36 – $59.99 per person.  Advanced Dining Reservations are recommended and Pre-Payment is required.

Be sure to check out my Travel tab above for more Disney posts (both Disney World and Disneyland)!