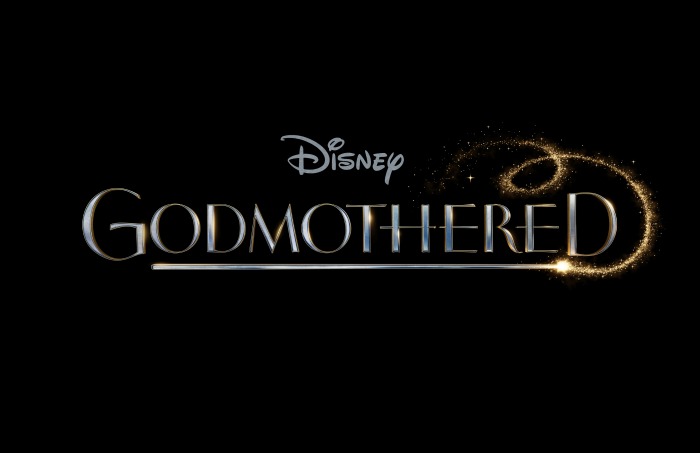 It’s the first week of December and if you’ve had a week similar to mine, you needed some joy, some laughter. It was too cold to put up the outdoor Christmas lights (why didn’t I do it before Thanksgiving when it was warm?) and no, I haven’t even begun to decorate the inside. But it’s December and I have a not so little girl who is trying to grow up but still loves all things Christmas and expects a little magic. So, I did what any mom would do. Or maybe it’s just me. I booked a horse drawn carriage for some Christmas light looking followed by some mother/daughter movie-time thanks to an advanced screening of the new magical holiday fairy tale from Disney+ – Godmothered. This is my no-spoiler Godmothered review.

(Disney provided access to an advanced screening of the film. Affiliate links in post where a small commission may be earned at no cost to you for any purchases made.)

Disney+ has been in our home since it began streaming late last year and we haven’t regretted that decision at all. So much entertainment for all members of our family with every genre we could want. This holiday season, Disney has a holiday hit on its hands, as Godmothered is not only entertaining, but heart-warming. It’s exactly the kind of movie I needed to kick off December (and maybe kick me into high gear and finally get the house decorated.) 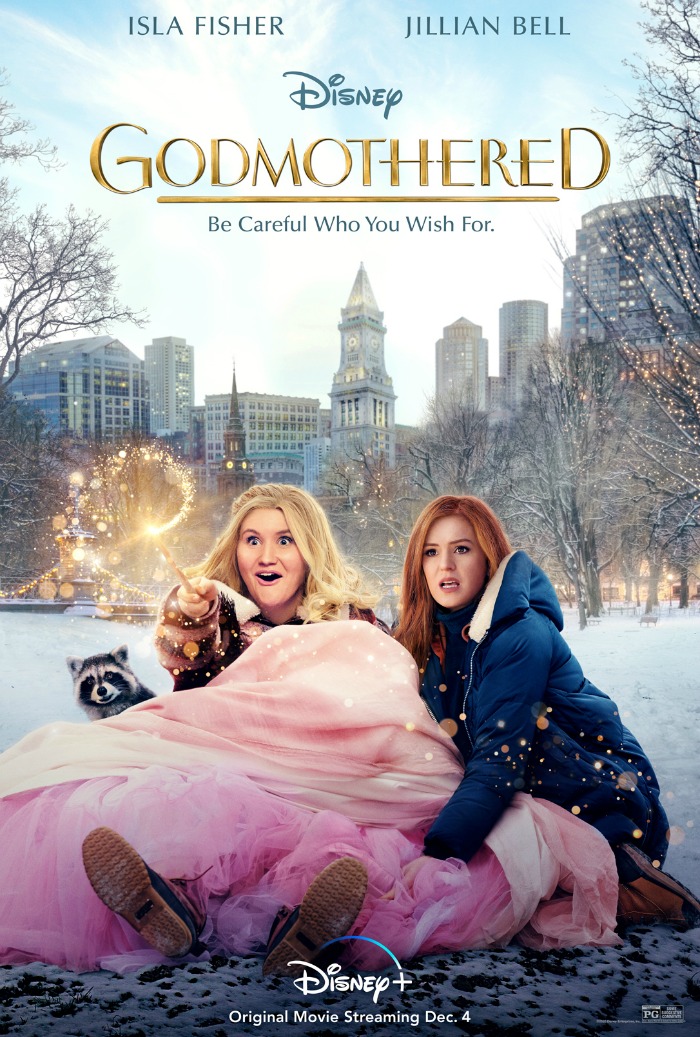 Set at Christmas time, “Godmothered” is a comedy about Eleanor, a young, inexperienced fairy godmother-in-training (Jillian Bell), who upon hearing that her chosen profession is facing extinction, decides to show the world that people still need fairy godmothers. Finding a mislaid letter from a 10-year-old girl in distress, Eleanor tracks her down and discovers that the girl, Mackenzie, is now a 40-year-old single mom (Isla Fisher) working at a news station in Boston. Having lost her husband several years earlier, Mackenzie has all but given up on the idea of “happily ever after,” but Eleanor is bound and determined to give Mackenzie a happiness makeover, whether she likes it or not.

This modern day story begins as so many of our Disney fairy tales have, with an intro featuring a classic storybook. Disney was off to a great start. We settled in, and though it was a school night we were determined to stay up late (shhhh – don’t tell).

The first 30 minutes had us laughing. A lot. From learning the three steps for fairy godmothers thanks to a perfectly cast Emmy winner Jane Curtin (a glittering gown turns a frown upside down) to Eleanor trying her best to help Mackenzie and failing miserably (hello eyebrows), Godmothered delivers on humor.

As much as we laughed, there were two things which stood out to me – the music and the family relationships.

First, the Godmothered Soundtrack is outstanding. While the film at times reminded my daughter of a funnier Enchanted, the music had all the feels of The Polar Express. A couple of the instrumental pieces played and I had goosebumps. 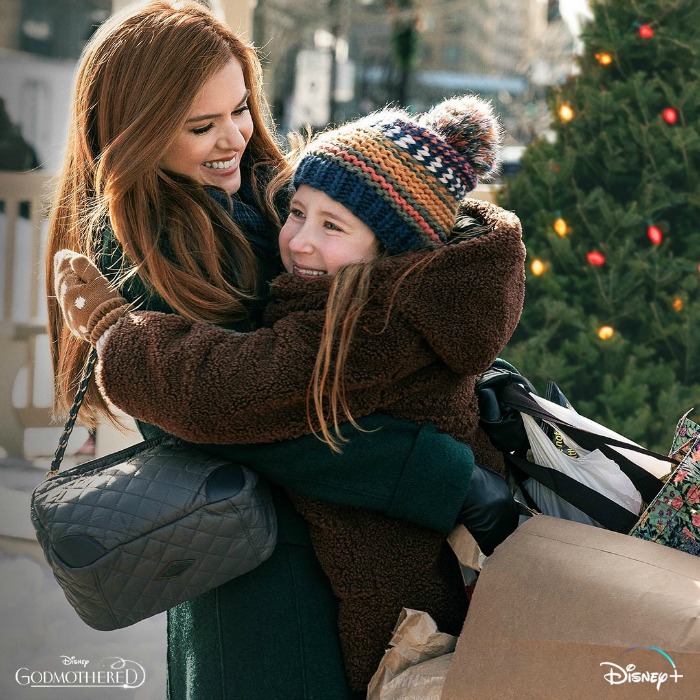 I lost my mom one December. Though I was an adult when she passed unexpectedly, Godmothered really hit home. Mackenzie didn’t exactly get her happily ever after in life when her husband unexpectedly died. She was a mom, a widow, trying to juggle grieving with raising two daughters. I can’t imagine. Well, maybe I could a little. I have a sister and I know what we went through. I nearly fell apart when it was mentioned how they don’t talk about their dad because everyone gets upset. Relatable? Yes.

For those who might worry the grief is a main focus in the film, don’t. While it is a major event in their past and it couldn’t help but influence their present and future, Godmothered tackles it well. There is way more joy than melancholy, all the while providing real life conversations that many will be able to relate to with their own grief. Every family has their “stuff” to deal with. This family just happens to have been assigned loss. How they move forward in life is part of the film’s lesson and sweet, dear, godmother-in-training Eleanor figures that out. Through her silliness and love, Eleanor helps this mother and her daughters heal. 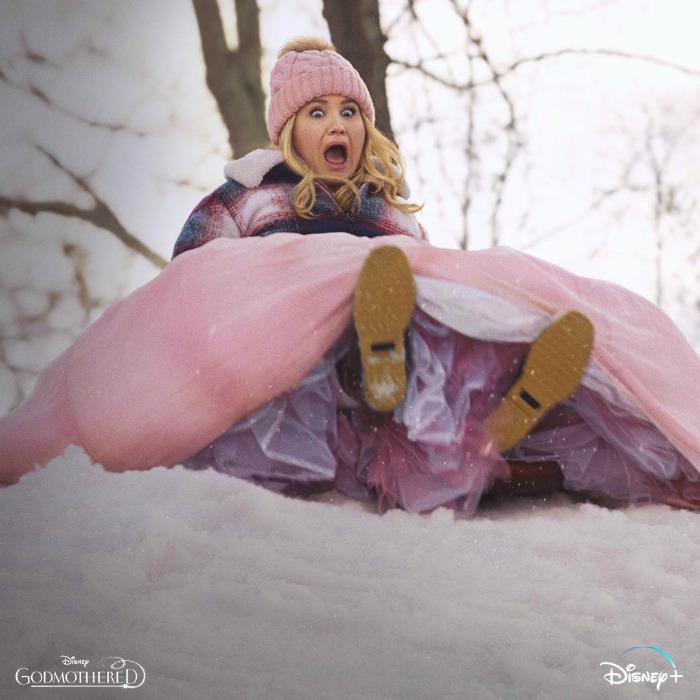 Joy to the World

What the world needs right now is more laughter and that is exactly what Godmothered brings to the table. Eleanor can’t help but make you giggle at times with her lack of knowledge about the modern world. Oh if we could just bottle up that innocence, but it does provide for some great scenes.

The only thing I didn’t like in the film were the small snippets of the news anchors on air. I found it didn’t quite fit and reminded me of  similar snippets in Pitch Perfect. It might just be me though.

All in all, Godmothered is a wonderful holiday film with plenty of wand-waving magic.

Take a look at the official trailer…