Walt Disney World &  Food Network…..two of my favorite things. Combine them, and you make for an unforgettable day in Florida.  I was there!  My whole family was there!  It was an incredible day and a magical evening.

But first, you can actually experience part of it yourself! See Chef Robert Irvine as he is faced with the challenge of feeding volunteers and their families on a huge Disney event day honoring Volunteers! Chef Irvine’s menu had to be inspired by Disney princesses!  Curious?

Now….to tell you about this amazing day that I spend as part of the Disney Social Media Mom’s Celebration! Leaving my family behind in the early morning (to catch up with later), I joined other moms on a bus ride to Epcot to enjoy a wonderful breakfast at the American Adventure Pavilion. If you’ve never experienced walking in a Walt Disney World theme park while it’s completely empty……WOW! During our breakfast we learned about social media from the best, Guy Kawasaki ……hilarious man! I learned a few tricks too, which is always a plus.

When breakfast was over, we were escorted to a huge area indoors and were treated as part of the press once again. Walt Disney Word was celebrating VOLUNTEERS, as part of Disney’s Give a Day, Get a Day program. By mid-February, over 600,000 people had already signed up to volunteer in their communities (and were rewarded with a free Disney ticket). NOTE: The promotion has ended now as 1 million people had volunteered!  🙂

As I was mesmerized watching press from all over the world, people and muppets like Kermit the Frog and Ty Pennington started jumping on stage just a few rows in front of me. It soon became clear there was something “behind” them that needed to be unveiled. Volunteer families from all over the country were recognized and soon we heard those famous words from Ty Pennington….MOVE THAT……but it wasn’t a bus! A record-breaking canned food structure was revealed…..in shapes of our favorite characters. Later in the day, those cans were boxed and sent to feed those in need……over 70,000 meals! 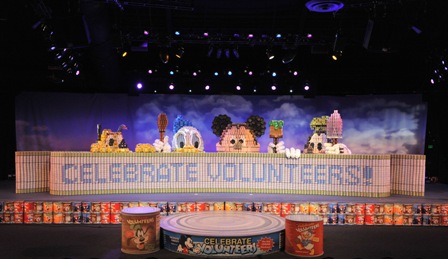 Yes, Mickey and Donald were made from everyday food! Tons of tuna and other products. Here’s a closer look just to prove it….and yes, the heavy coat was needed as it was like 30 degrees in Orlando! Unbelievably cold! 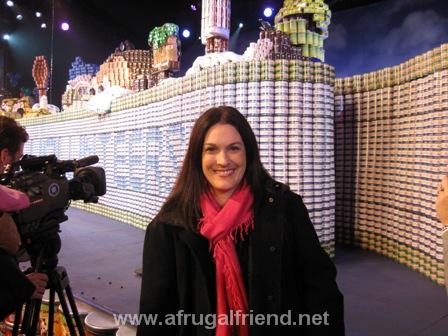 After the press conference, I met back up with my family for an afternoon of fun at Epcot. Did I ever tell you that the best place to meet the Disney Princesses isn’t at Magic Kingdom? It’s at Epcot….you’ll find Snow White hidden in Germany, Jasmine in Morocco, and Sleeping Beauty in France…..along with many others. Best place for characters by far!  Here, my little one is meeting her favorite, Snow White, for the very first time.  My personal favorite was Alice in Wonderland…..she was absolutely perfect.  So much so, that I got back in line, that time with my video camera. 🙂 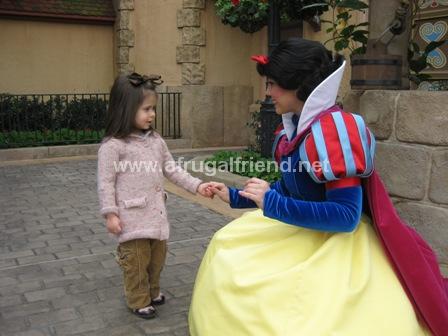 While we were having fun, BUZZ started going around. I saw a few tweets from fellow bloggers and then I saw it myself. Confirmation. Food Network was there. Chef Robert Irvine was there. Check out the roped off area inside Epcot…. 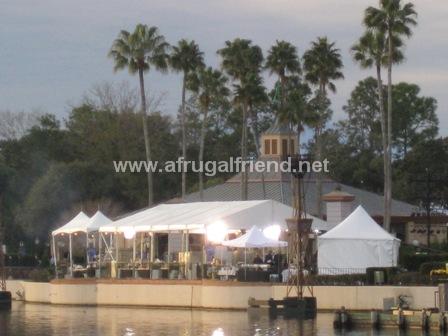 Dinner Impossible was in the house and I was thrilled. Maybe more than thrilled…….I might have been jumping up and down (and not because it was freezing). I knew that what we were about to experience was seriously incredible.

While we impatiently waited, my family and I volunteered that afternoon with several private projects at Epcot. We packed up bags filled with toothpaste, deodorant, and more to be shipped to Haiti .We also planted a tree as part of Disney’s Friends for Change…Project Green. My daughter was probably the youngest voluntaEAR there…..and while it was fun, we also knew we were starting to teach her the importance of contributing in the community. We also rubbed shoulders with some young Disney celebs while planting…….with shrieking girls and press looking on from behind the marked off area. 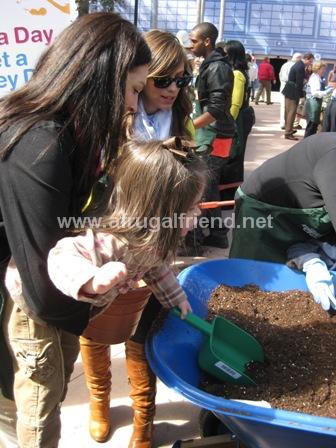 Yes, I might have gotten Joe Jonas’ autograph, but having a 2 year old (who has no clue about The Jonas Brothers), we willingly gave it to a fellow blogger who has a teenage niece with a serious medical condition.  Rumors started flying that we were having a private concert that night….and from the people I spotted around EPCOT, it seemed to be true. 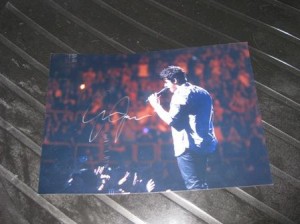 So, with the excitement of Chef Robert Irvine creating our meal and a private concert at Epcot under the stars, we made sure we were one of the first ones in. Before we were allowed in, we were amazed at the hidden talent that entertained us. We were freezing cold, but it didn’t matter. Disney provided us with glow in the dark sticks (fun) and hand warmers. We grabbed a great little table that we shared with a wonderful family….and our daughters had a blast DANCING!

Now, back to Dinner Impossible…… 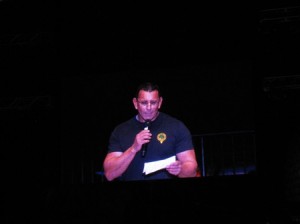 Dinner was served buffet style with many stations set up. 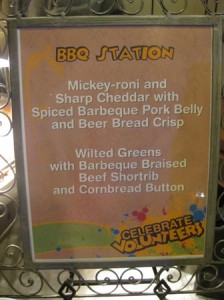 And the presentation was amazing. Check out this Cobb Salad…..but I’ll let you watch Dinner Impossible yourself this week for the full menu! 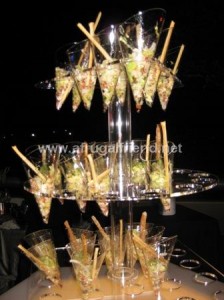 We knew going into this that the Disney Social Media Moms Celebration would be big. I just had no clue how big. I didn’t know I’d be sitting among the press during press conferences. I didn’t know I’d be spying Joe Jonas, Demi Lovato and other celebs as they did photo-ops throughout Epcot. I sure didn’t know we’d be given Media Fast Passes  (that was heavenly with a 2 year old)! But to have dinner hosted by Dinner Impossible. Well, that’s above and beyond. Leave it to Disney to make my day unforgettable. But of course there was more…..

….and my 2 year old shocked us all by screaming the loudest for Joe Jonas (who knew?).

Add in some fireworks, hot coffee, amazing desserts, and my family……..it was a perfect day.

*Disclosure: I attended the Disney Social Media Moms conference, for which I paid a fee, but received what many would consider a sweetheart deal along with alot of Disney magic. Disney did not require anything from me in exchange for the benefits I received. This post is written 100% by me (A Frugal Friend) and all opinions are mine.