This was what I’d been waiting for ever since I received that Disney*Pixar invitation in the most unusual of places – you do know that story, don’t you?

There was a certain familiar excitement in the air.

I had a couple hours in my room to get ready. I’m not usually one to take forever in the getting ready department, but this was different. I spent extra time on my makeup. Made sure my hair was a little straighter than usual. And the toes, well, they needed a little last minute polish.

I had a phone that needed to be fully charged and external chargers as backups, just in case. Then there was the dress……….can I just say how difficult it is to zip up a dress when you are traveling solo? But I did it – whew!

The time had arrived………I was off to the FINDING Dory Red Carpet World Premiere! Follow along as I take you step by step.

Disclaimer:  Disney*Pixar, Disney Channel and Disney XD sent me to Los Angeles on an all-expenses paid trip, in exchange for my coverage of these events, which included the FINDING DORY red carpet world premiere. All opinions are my own.

Twenty-four incredible bloggers and I were shuttled over to Hollywood from our hotel. We stayed at the luxurious Sheraton Universal hotel during this trip,  just minutes from Hollywood Blvd, our ultimate destination. 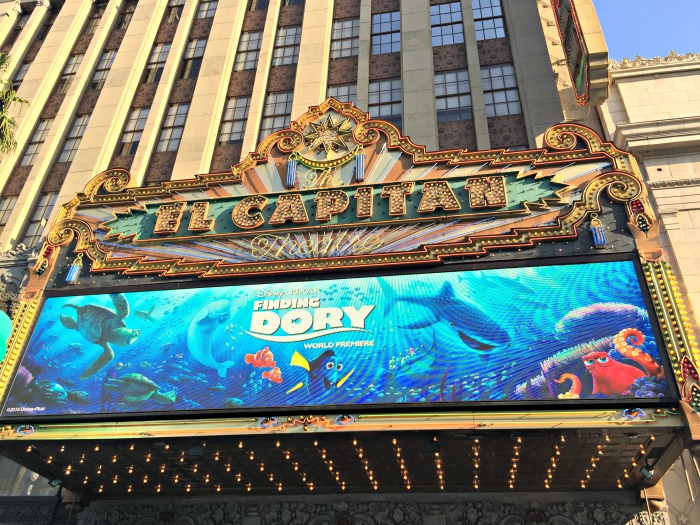 I’ve been fortunate enough to attend several Disney red carpet events before, and all have been held at the famous El Capitan Theatre. As I saw the theatre on Hollywood Boulevard, memories started to flood in…..

Each and every red carpet had been memorable, and I knew this one, the FINDING DORY red carpet world premiere, would be unforgettable….even for the likes of Dory (who, let’s face it, has a little problem with forgetting things).

Let me take you up high, for an aerial view of Hollywood Boulevard, as they were preparing for the event.

Yes – first thing you notice is that the red carpet is not in fact red, it’s BLUE! I had predicted this one, learning from past events.

This is Hollywood Boulevard, the actual street in Hollywood. It’s shut down completely for the event, all day and all night. This is the street made famous by so many tourist attractions like the Walk of Fame, which features stars on the sidewalk honoring those who’ve left their mark in the fields of television, motion pictures, etc. You can see many of the stars in the lower left of this picture. Crowds line this area during the premiere for the chance at a glimpse of their favorite celebrities. Crowds also line the rooftops of many of the area buildings.

On the right is the actual “red carpet” area. This is where all attendees arrive, including celebrities. Media outlets, from television to radio, line this area in the hopes that they can interview the cast and other attendees before the premiere. This is the “Lights, Cameras, Action” area……..so much going on.

On the left is the area already set up for the After-Party, where everyone would head after watching FINDING DORY at the El Capitan Theatre.

But first………we were on Hollywood Boulevard. It just so happens that this is also where the Dolby Theater is located and the famed Oscar staircase.

So……looking our best, we gathered on the stairs for a group photo before we braved the crowds.

And braved the crowds we did, especially as I was forced to dodge a man with a HUGE snake around his neck. You never know what you’re going to encounter on Hollywood Boulevard. That one had my heart racing. 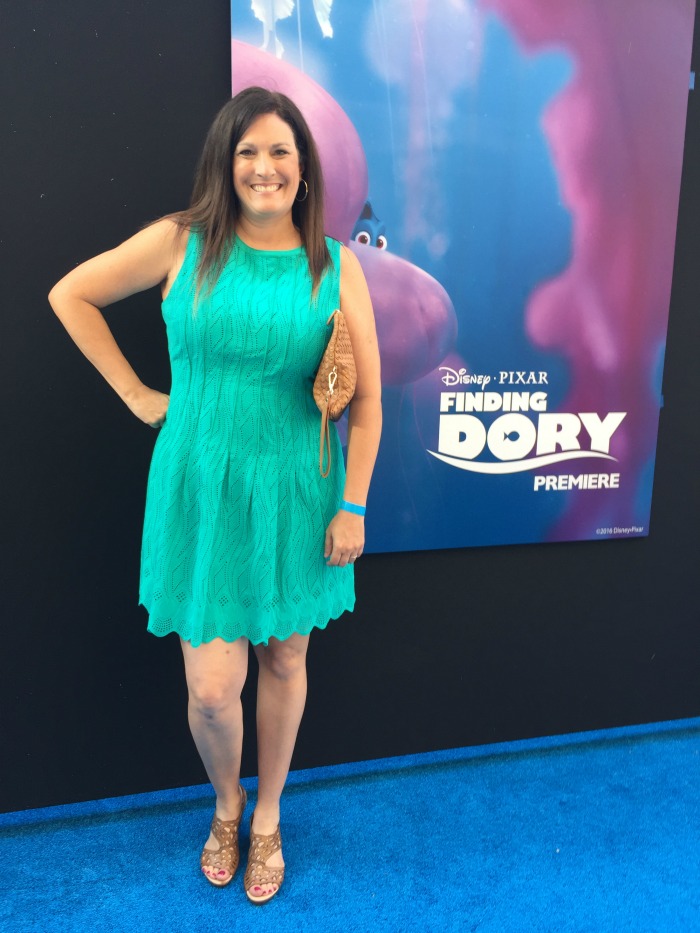 It’s about this point, when you’ve made it past security, that your smile doesn’t go away. As much as I knew what to expect having done this before, I’ll tell you honestly…….. it never gets old.

This red carpet was perhaps extra special for one reason in particular………..just 8 months before I had broken my foot. I was bedridden for weeks and the thought of even walking to the kitchen was hard enough to bear. Here I was, 8 months later, traveling to California, walking a red carpet, and in heels (though really comfortable wedge ones). From broken foot to red carpet – truly grateful!

Just minutes after snapping this dress photo, the crowd erupted. 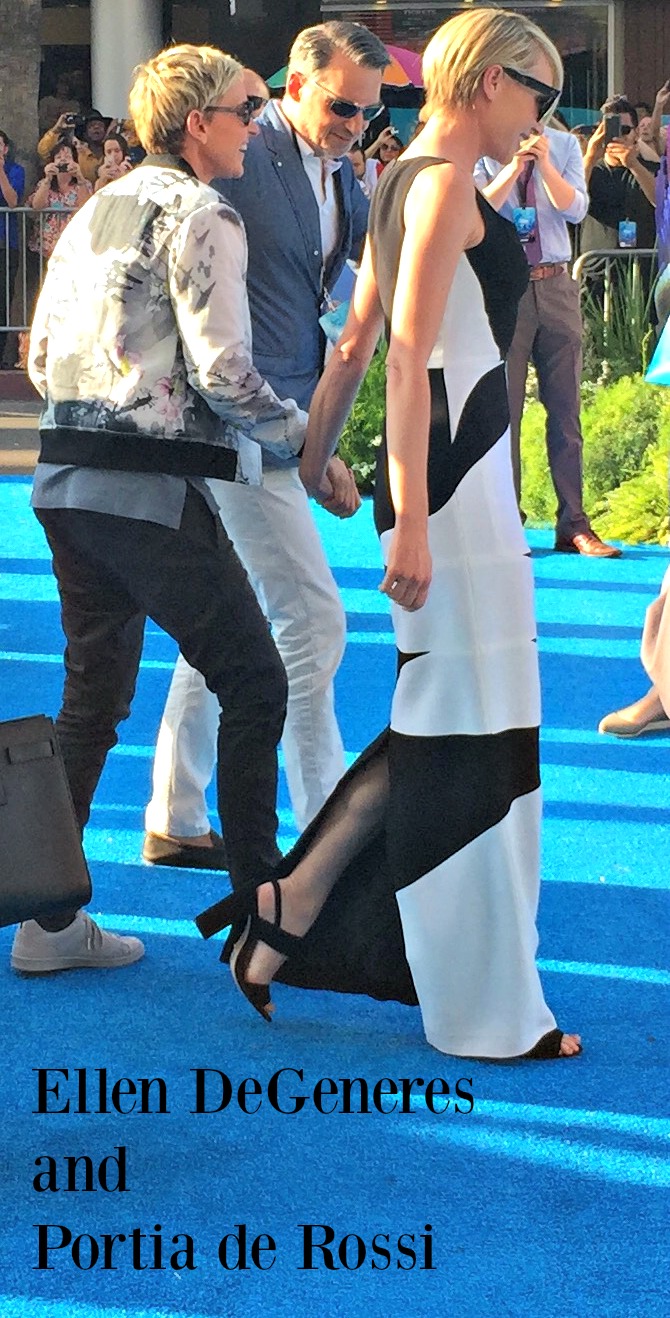 The star of the night had arrived, stepping out of a black vehicle onto the carpet, Ellen DeGeneres, along with wife Portia de Rossi.

I quickly snapped this photo as they walked by. 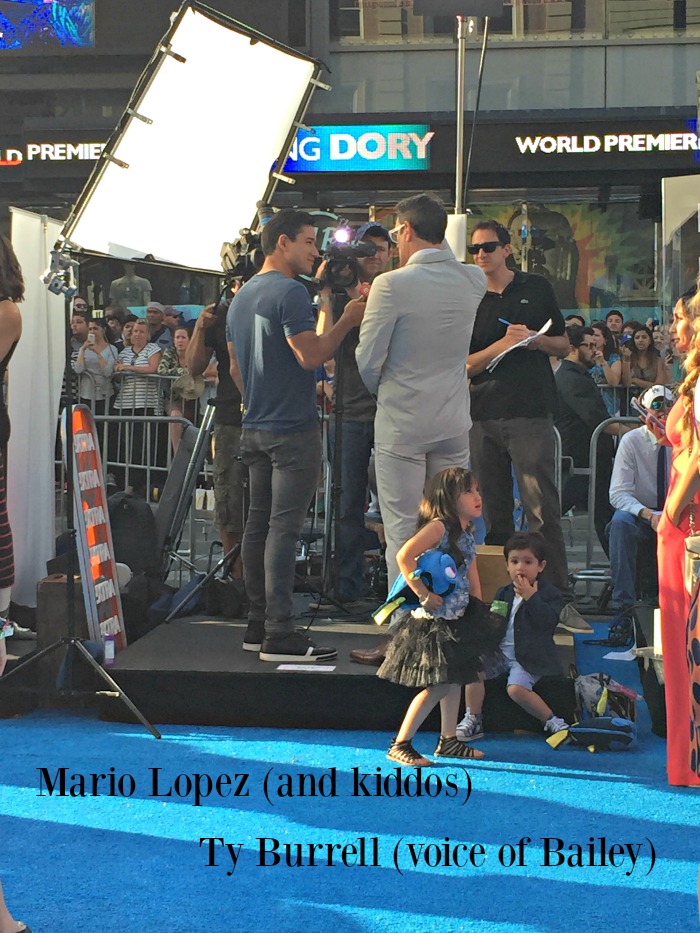 Oh, the crowds were going wild with Ellen’s arrival, but she wasn’t the only one. Everywhere I turned there were other members of the cast and celebrities.

FINDING DORY is a family movie, so you can bet celebrities were itching to bring their kiddos to the premiere, and they did. In fact, I caught Mario Lopez interviewing Ty Burrell (voice of Bailey the beluga in FINDING DORY, and well known for his role on MODERN FAMILY). If you take a look, you’ll spy Mario Lopez’ children at Ty Burrell’s feet. Daddy brought along his kids to a premiere, where he was busy interviewing for EXTRA!! I can’t blame him.

(And yes, I’m on television during this interview since I was right there taking a photo) Ha! 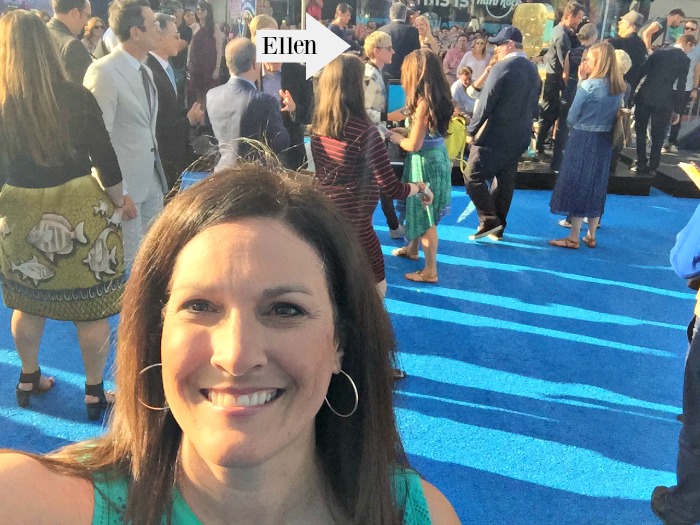 I told you, the smile is permanent!

I just had to take this selfie with Ellen in the background, though tomorrow (Tues 6-14) you’ll have to come back to read about my interview with Ellen – it’s unbelievable! Really!

With every Disney movie premiere, there is also a party. Though I’d always attended parties before watching the actual movie, this premiere was different……..there would be a late night, After Party.

So once we had walked the red (blue) carpet, it was into the theatre we went. Pretty good seat, huh? Yes, I was sitting just rows away from Ellen herself while watching FINDING DORY. No photos from inside though, as phones/cameras are taken away from us during the actual showing of the film.

Be sure to read all about my FINDING DORY movie review – spoiler-free! 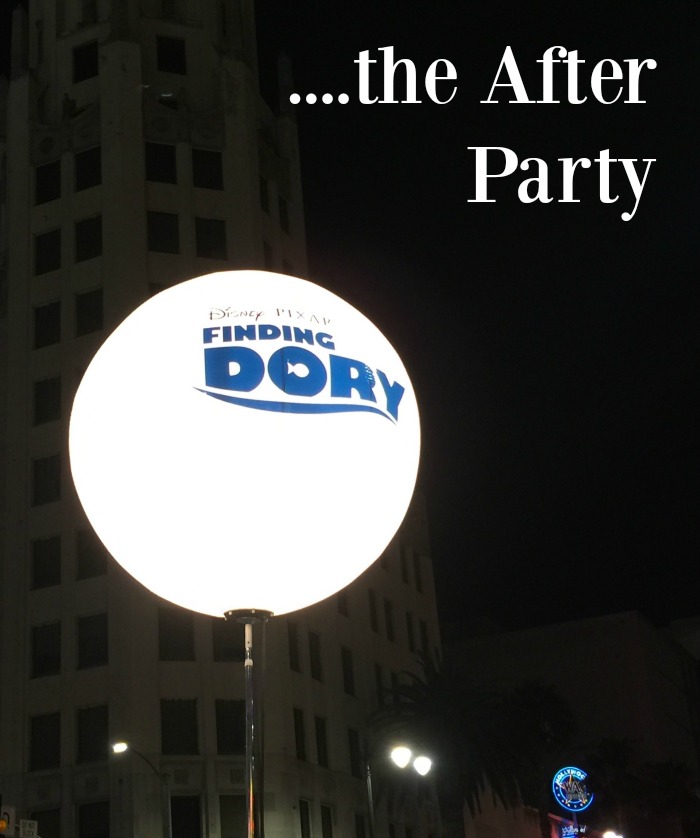 The sun had gone down while we were inside watching FINDING DORY.

Now it was time for the After Party! 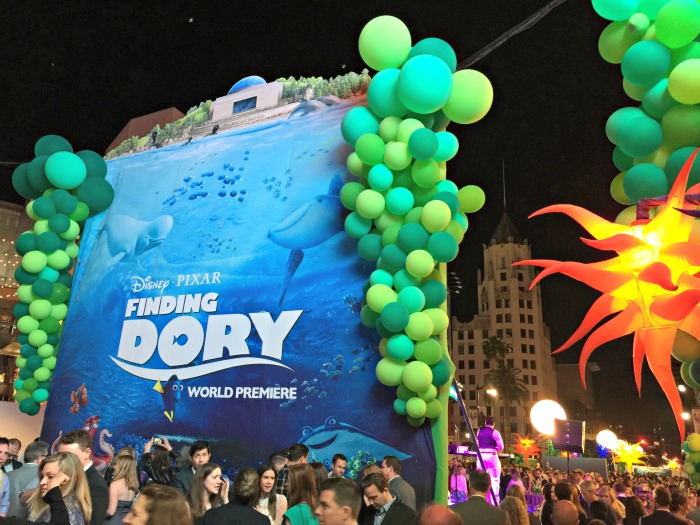 There is so much going on during a premiere party…. food, music, games for kiddos (though I’m sure many parents left right after the movie).

The party was crowded and as I roamed through, I couldn’t help but spy some familiar faces. There was Executive producer John Lasseter, Garcelle Beauvais (who I had also seen at last year’s INSIDE OUT premiere), Sarah Hyland, Dominic Sherwood, Dean McDermott (Tori Spelling’s husband, who was watching his kids on the dance floor), and of course Ellen’s mom.

Other celebrities left before I spotted them, like Billy Bob Thornton, Ian Zering, Beverley Mitchell and Teen Beach heartthrob Garrett Clayton (oh, I would have been mom of the year if I’d gotten a selfie with Garrett)!

Then there were these unforgettable faces….. 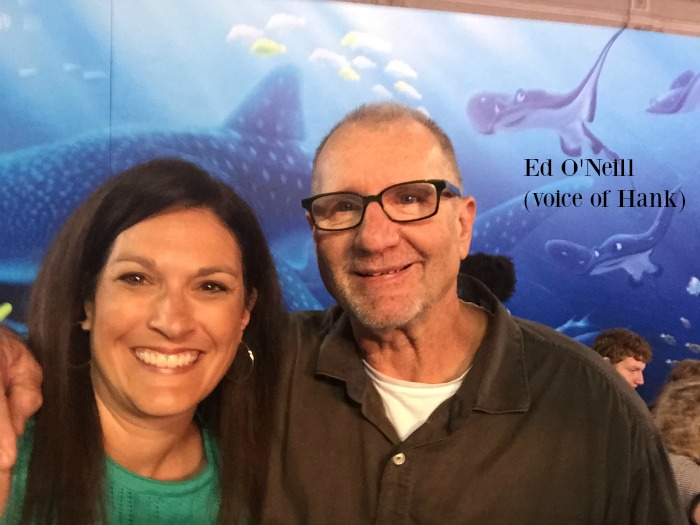 Ed O’Neill, the voice of Hank in FINDING DORY, graciously stopped to take this selfie with me.

America is about to fall in love with the grumpy septopus, the Pixar character who has been secretly hidden in EVERY Pixar movie!

But to me………Ed O’Neill will always be Al Bundy (from MARRIED WITH CHILDREN). 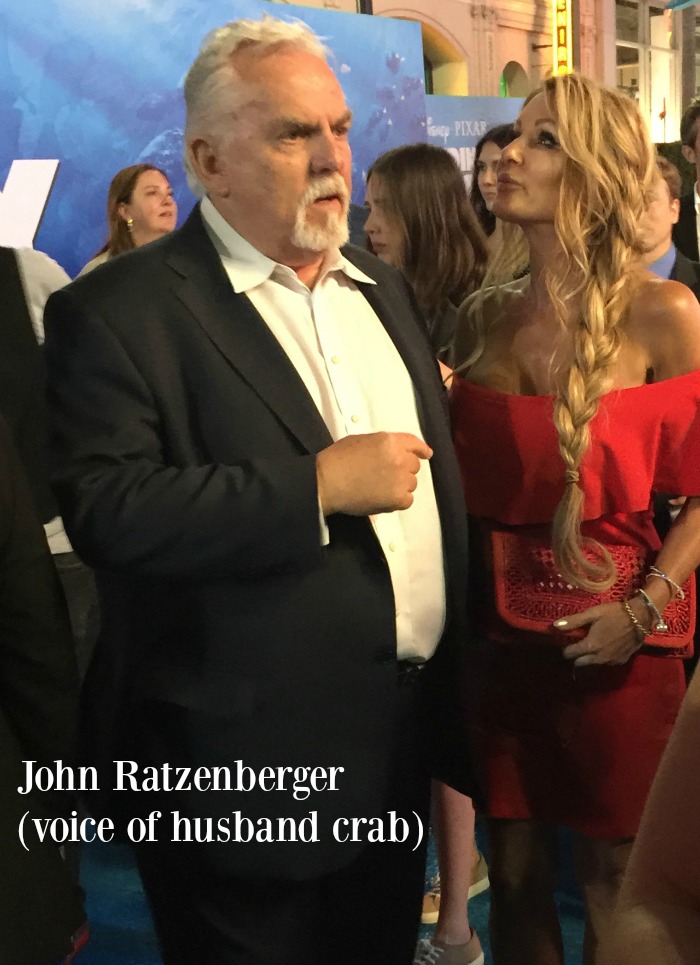 I happened to be walking along when I saw Cliff Claven, um, I mean John Ratzenberger, the voice of husband crab in FINDING DORY.

FUN FACT – John Ratzenberger has been in every single Pixar film to date!

But……yea, to me, he’s always Cliff Claven from CHEERS! 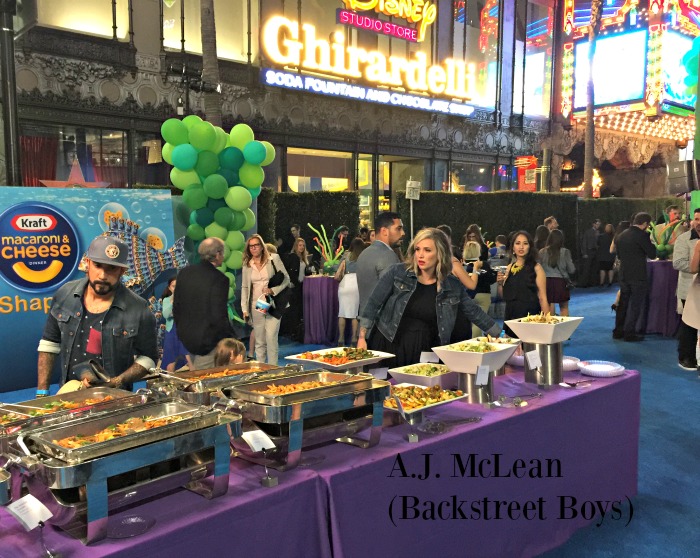 You know Disney*Pixar is going to do a party right and I hadn’t eaten dinner yet. As I stepped up to check out the offerings, I spied one of the Backstreet Boys, A.J. McLean and his family. I wasn’t the only one needing a bite to eat. 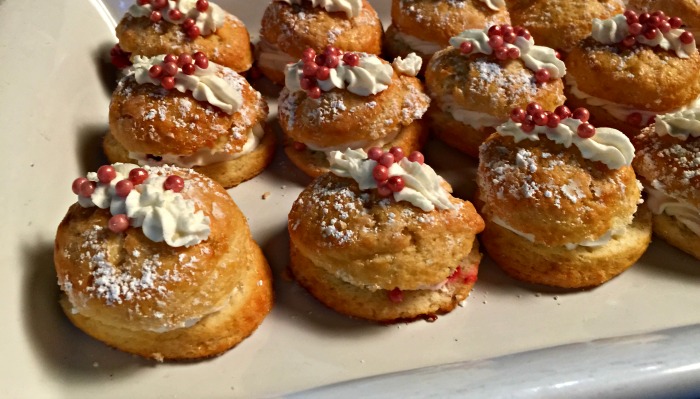 And the desserts……..check out these adorable (and might I say delicious) Strawberry Shortcakes. 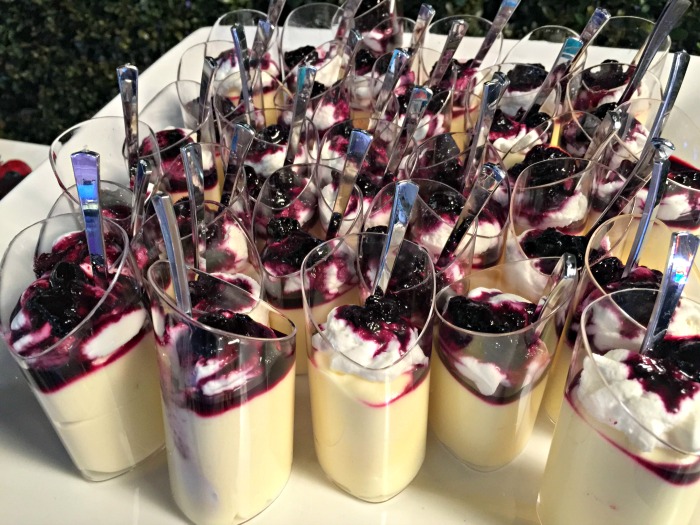 Then there were these drool-worth Lemon Pudding and Blueberry Parfaits. 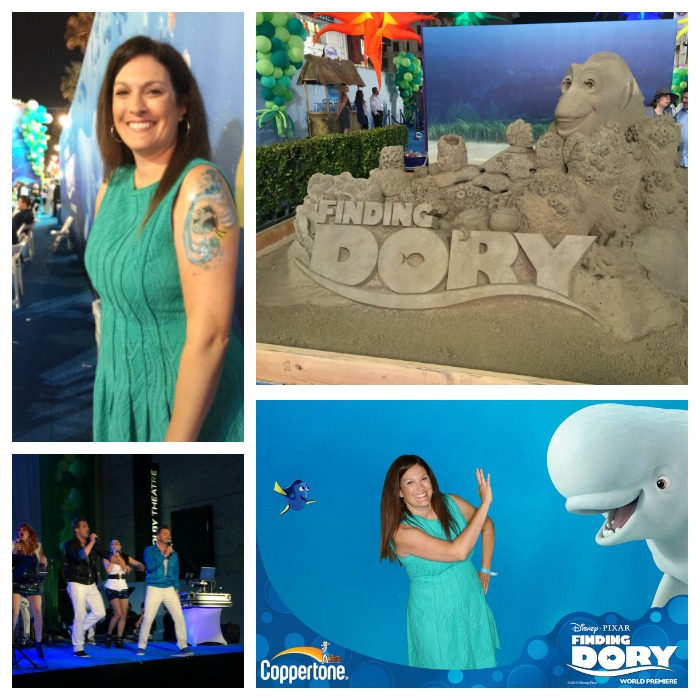 There is so much fun to be had at a premiere party. This time there were green screens to get creative with, a live band, a huge sand sculpture and check out the tattoo I got. Okay, so it was temporary, but oh, so fun!

There was no better way to kick off the summer…….old friends, new friends, and Dory too!

Be sure to come back every day this week and next for a new post from this trip experience – cast interviews, set visits and more!

But for now, let me leave you with two things…….a preview that will tug at your heartstrings…….little Dory and a FINDING DORY inspired jewelry giveaway!

And don’t forget to come back every day this week and next for more blog posts on the trip and check out these already done: 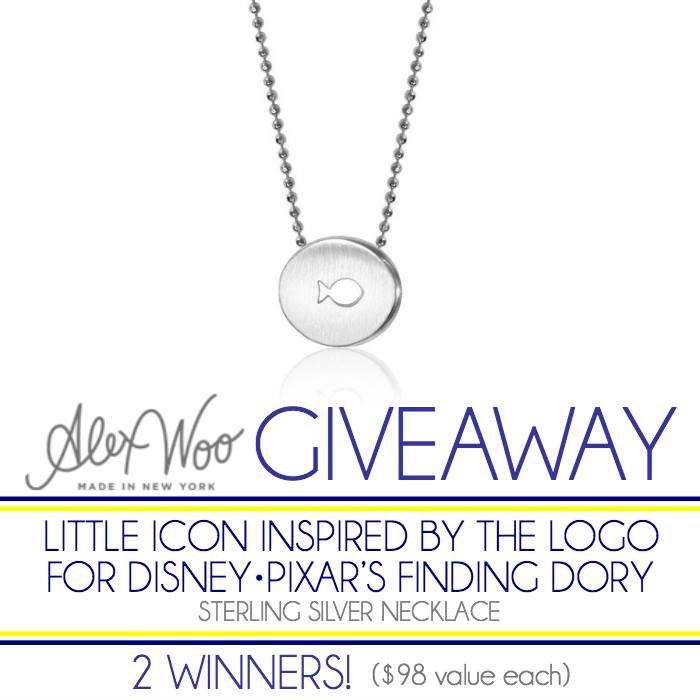 The giveaway is open to residents of the US only, ages 18 and up. It will end on 6/27/16 at 11:59 PM EST. One winner will be randomly selected using the Giveaway Tools random selector and notified via email. Once notified, the winner will have 48 hours to respond or a new winner will be chosen. This giveaway is in no way associated with Facebook, Twitter, Instagram, Pinterest or Google. Void where prohibited.