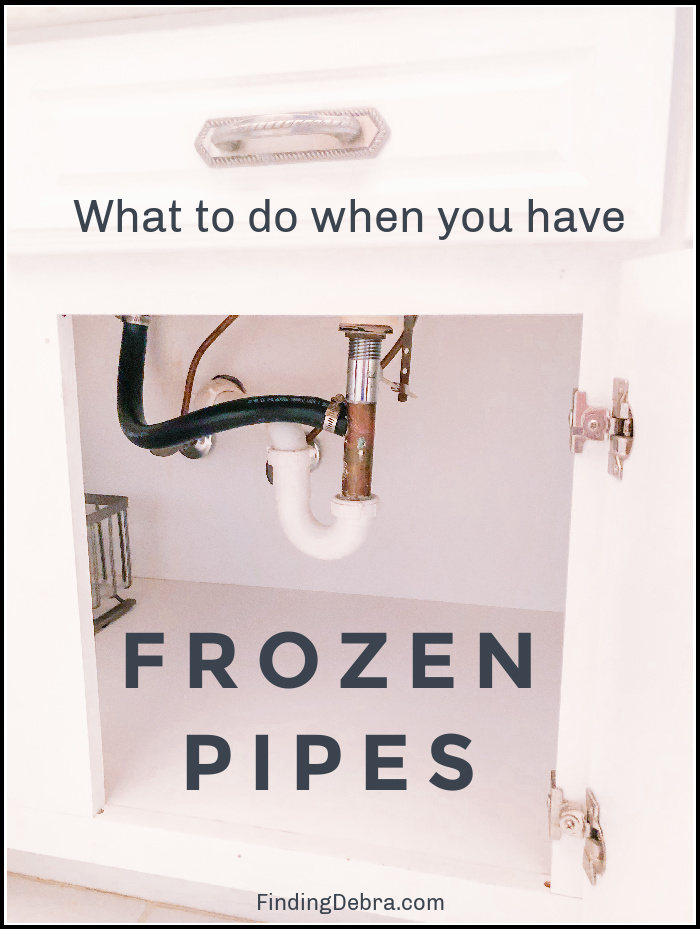 I’m  sitting here in Dallas, Texas during a week that has been anything but ordinary. I’m one of the fortunate ones with power and water, for now, but I’m watching as so many family and friends throughout the state struggle with these snowstorms, subfreezing temperatures, and brutal consequences to our Texas power grid. But there was one challenge we faced this week – frozen pipes.

With the usual disclaimer that I am not a plumber, nor pretend to be one on tv, I successfully dealt with our frozen pipes this week which was a very real, very scary concern.

Today I’ll share with you a little background on our situation so you know what we were facing, plus every single thing I did to remedy it, as I’m not sure it wasn’t a combination of all the things. I’ve also successfully been on the phone with many friends over the past few days walking them through what I’m about to share with you. It worked for the ones I’ve heard back from too. While I can’t guarantee success, my hope is that this will help you in some way.

What to do When you have Frozen Pipes

Why? I have seen friends who literally cut a hole in the wall trying to unfreeze their pipes.  Did it work? I don’t know, but that is something that I wouldn’t want to rush into.

Not panicking and trying to learn as much as I could made me pause for a good 24 hours. I wanted to think about things before I jumped in. That said, I knew I had to do something before the end of the week as I didn’t want any pipes to burst when thawing began.

Why are Frozen Pipes a Concern?

While frozen pipes can be an immediate concern due to a lack of water, especially if your entire system is frozen, there can be bigger problems, ones that are costly.

I’m talking about bursting pipes, which can cause flooding during a time when it is not feasible to get a plumber out to your home. Icy roads and demand may make that near impossible. Remember, if your pipes have frozen, chances are you aren’t the only one. Right now I would hate to venture a guess at how many Texas residents have frozen pipes at least in some part of their home.

Like I mentioned earlier, we had power. That was huge, but not essential.

We did everything we had always been told to do in anticipation of the storms and subfreezing temperatures.

Despite that, we had two sinks on exterior walls. One in the laundry room and that fared well with no issues to this day and one in a bathroom on the north side. It was the bathroom that caused the problem. Not only did we lose one side of the faucet (will explain more on that in a minute) but we lost the bathtub/shower and toilet as well.

My Mistake: Where faucets had one nozzle, that was obviously what I had drip. Where faucets had two nozzles (hot, cold) I only turned on one to drip water. In my research, it looks like it’s pretty clear that both sides need to be slightly on for dripping. I had the faucet dripping using the hot water side of the faucet. The cold side of the faucet was in fact frozen the next morning. No water came out when I turned it on. Toilet didn’t flush. Bath/shower was still dripping (it only had one knob) but more water would not come out.

We did not act immediately and we had success – I think that is important to note so that even if you are days into this you shouldn’t give up hope. I waited more than 24 hours to even begin to try anything because I only had a vague notion of what to do.

1. If you have power, turn on lights in the room when you begin this. Our bathroom was actually two small rooms, so the lights warmed it up considerably. Cabinets were already open.

2. EXTREMELY IMPORTANT: For the side of the faucet that isn’t working, or the entire faucet, make sure you have it OPEN as if water could come out. Maybe not fully, but at least halfway. This is so there is somewhere for the water to go once you unfreeze the pipes. This will seemingly help prevent any bursting because the water can exit. Make sure to do this before you proceed.

3. The hair dryer trick, though admittedly I only used the hair dryer on the pipes under the sink for 2-3 minutes. As someone not familiar with plumbing, I wasn’t sure what to shoot the hot air at. I quickly figured out that the white PVC pipes were drain pipes and probably not what I needed to heat up, but I did it anyway. I then saw that two thin copper pipes went up towards where the faucet knobs were. BINGO! They were both very cold to the touch, unlike in other bathrooms, even though I had hot water. I proceeded to use the hair dryer to blow hot air on both for 2-3 minutes. That is all.

4. Next, if you have the hot side of the faucet working, turn it on full blast while you continue.

If you do not have access to the hot side of the faucet, you will need hot water from some other source. Another sink that doesn’t have frozen pipes or maybe heated water from electric or gas stove. Put the hot water in some container to use in the bathroom.

5. Pour hot water down the toilet and bath/shower drain if they are frozen too.

That’s it. This took no more than 20 minutes and I decided to clean up the bathtub a bit while I poured hot water down too. All this, along with the lights on, warmed up the bathroom considerably, and the next thing I knew, water came gushing out the bathtub and everything was working.

REMEMBER: What to do to Avoid Frozen Pipes?

And if you still have frozen pipes (especially on the north side of the house) do the above.

Good luck and let me know if you have anything else you’d recommend or have success!