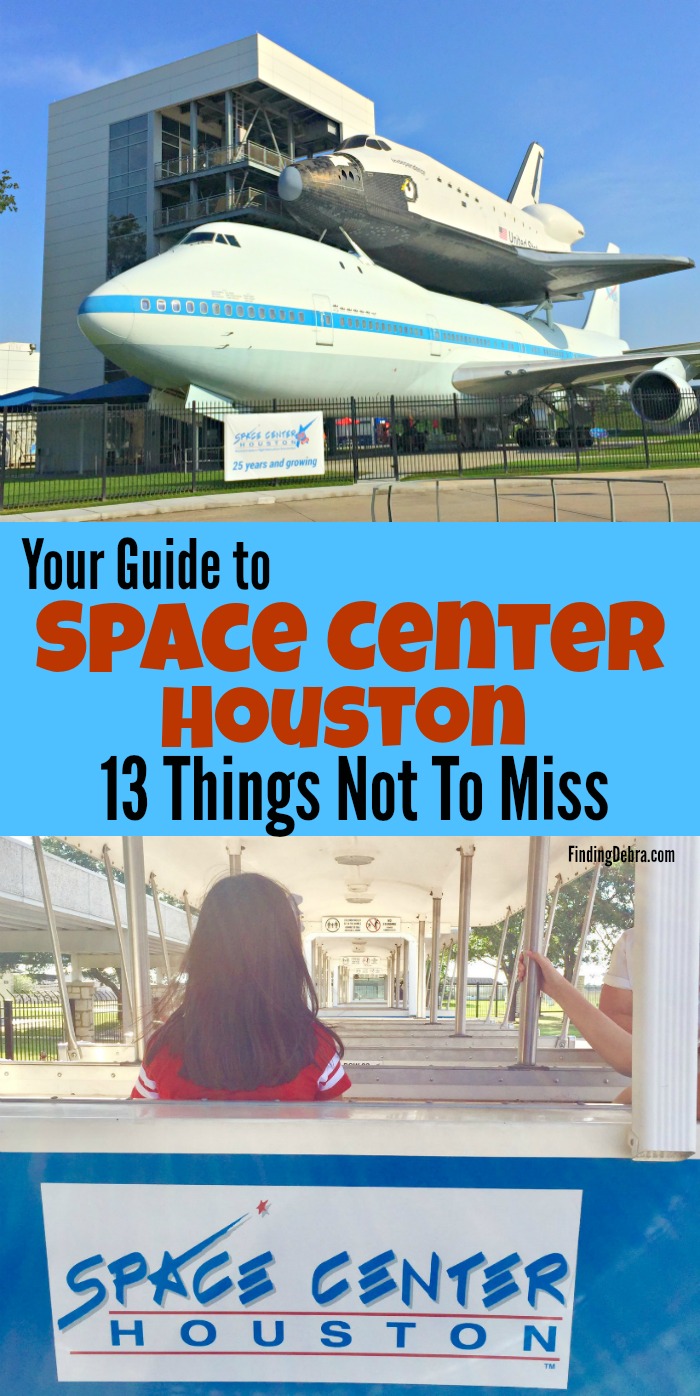 I wouldn’t have considered myself a space nerd. That is, until I started planning a mother/daughter trip to Houston, Texas with one major destination in mind – Space Center Houston. It was then that I discovered I might just have an inner space geek inside me, so much so that months later I found myself flying to Florida for an actual rocket launch.

But first, let me be your guide to Space Center Houston. There are definitely tips you will want to know, especially if you are heading there with kids on a family vacation or school field trip. Though the kids will LOVE visiting, trust me, this learning center isn’t just for the grade-school crowd and I’ll show you why.

(Complimentary access to Space Center Houston was provided. Some links in post may be affiliate links, where at no cost to you, I might earn a small commission during a purchase.)

Space Center Houston is a leading science and space exploration learning center. You might know it is one of Houston’s top attractions, but it’s also the Official Visitor Center of NASA Johnson Space Center and a Smithsonian Affiliate.

Airport: If flying in with Space Center Houston as your major destination, you will want to fly into Houston Hobby Airport. Note that there are two major airports in Houston and the other is far north of the center (about 1 hour away depending on traffic), while Houston Hobby Airport is 20-25 minutes away.

Here are 13 things not to miss during your visit…

Go Inside a Replica of Space Shuttle Independence 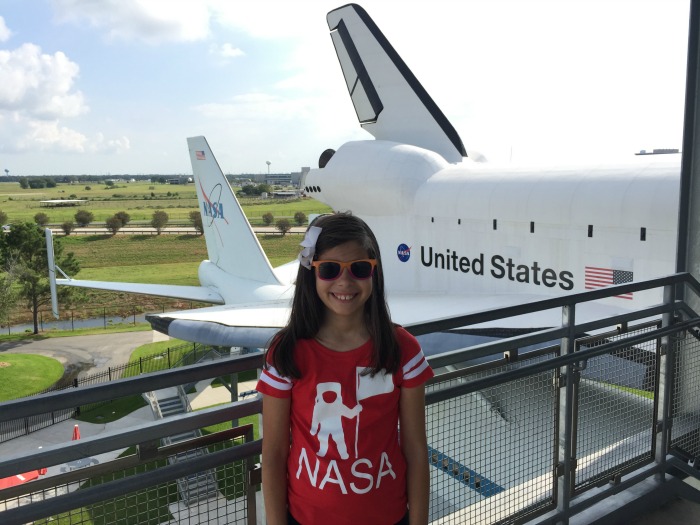 Driving through the gates at Space Center Houston is a bit surreal and the first thing you see to the side of the entrance is massive and impressive.

To the right and behind a gate, you will spy a replica of the space shuttle Independence, mounted on top of the historic and original NASA 905 shuttle carrier aircraft.

It’s quite a jaw dropping moment and both you and the kids will agree there couldn’t be a better start to the day.

TIP: Grab a photo opp in the parking lot in front of both aircraft. There will be a gate between you but it’s an incredible photo. You can also get one later from higher up as you begin to tour the aircraft (see above). 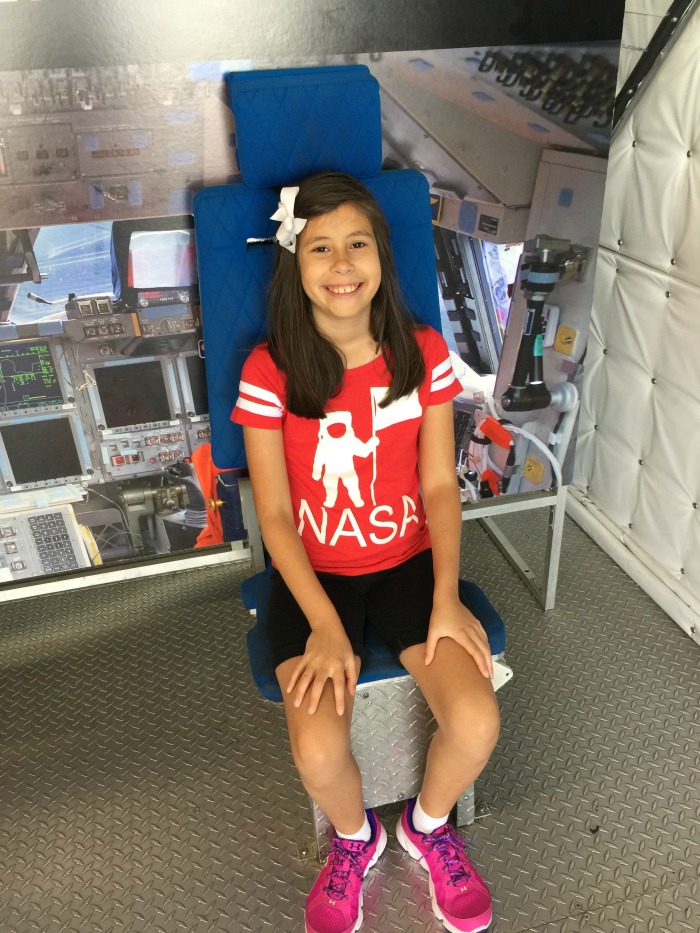 Access to the replica shuttle and original shuttle carrier are included with your paid admission to the center. You will want to follow the signs and head outside to access them via elevator or stairs (lots of stairs)!

Walking inside a replica shuttle was a first for us and it was quite an experience. Kids will love (and laugh) learning about how the astronauts showered and used the restroom.

This is the only place in the world where a shuttle is mounted on an SCA that the public can go inside. 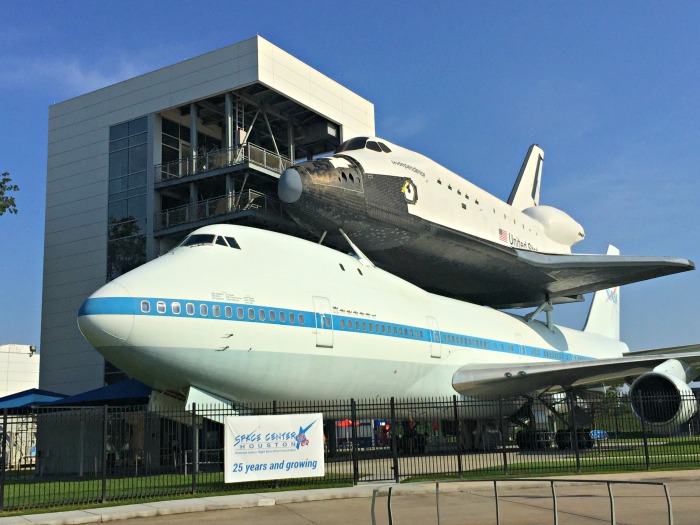 NASA 905 was the first of two Boeing shuttle aircraft carriers and carried space shuttles 223 times in its lifetime. 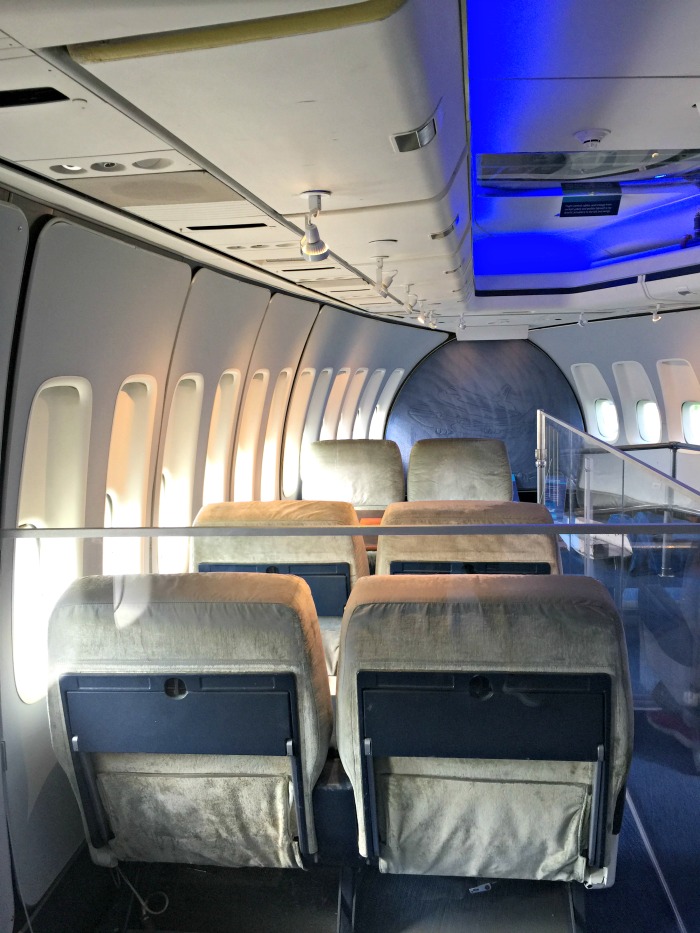 This was no replica. This was the real deal.

Fun Fact: NASA 905 was a stripped down and heavily modified American Airlines aircraft.

Most of the aircraft was turned into an educational center, providing many facts and history lessons along our self-guided tour.

One aspect I loved as a mom was that there was a section devoted to STEM aerospace careers. Aerospace career options abound  – it’s not just astronauts, but biomedical researchers, robotics engineers, spacesuit designers, and more. There was an interactive portion on computer which matched your interests to certain careers. 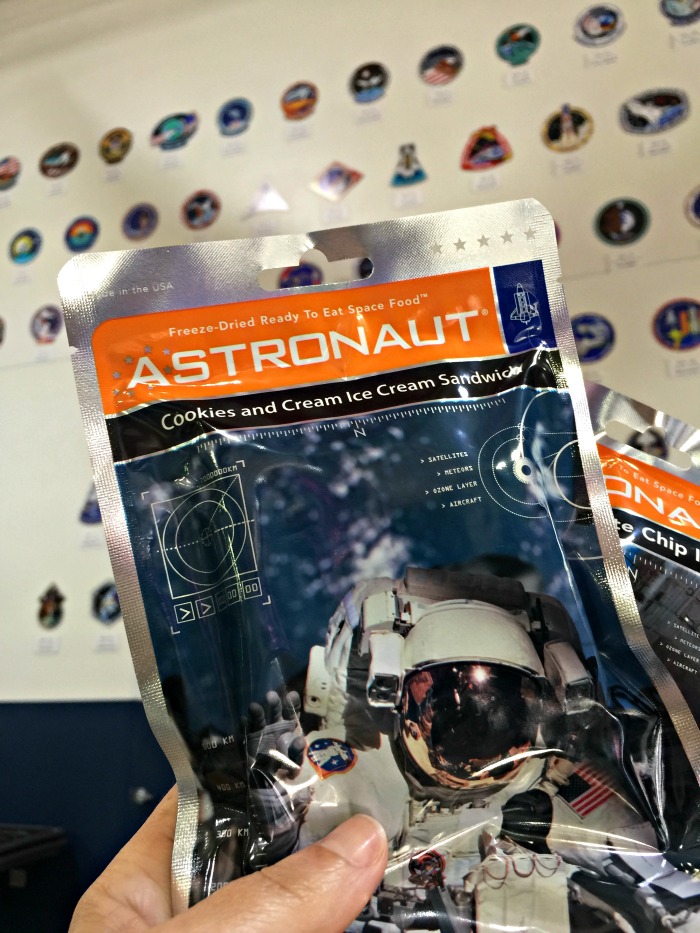 With everyone learning so much about how the astronauts manage everything in space, there is one activity you won’t want to miss!

When I was prepping for our trip, I went ahead and pre-purchased some Astronaut food from Amazon, not knowing if there would be any on site. I am happy to report that the gift shop does carry the food if you don’t have any, but you might want to grab a deal here and take it with you. We tried many of them and I will say that the ice cream options were my favorite, but we branched out and tried the fruit too.

It’s just a little fun thrown into your day for snack time. Our favorites of the Astronaut food were the cookies and cream ice cream sandwich and mint chocolate chip ice cream!

TIP: We spent the entire day at Space Center Houston so you will likely be eating at least one meal on-site unless you leave and come back. Note that they do have a very nice cafeteria with many different stations and options ranging from salads and soups to your more traditional fare like sandwiches and grilled items.

TIP: Take a look on the wall in the cafeteria. Every human mission NASA has flown since Gemini V has its own patch, created by the astronauts venturing into space. You will see those patches replicated on the wall.

Walk on over to Destiny Theater and see the podium where President John F. Kennedy passionately talked about heading to the moon.

The podium was donated to the center by Rice University in Houston, where Kennedy delivered that speech on Sept. 12. 1962. 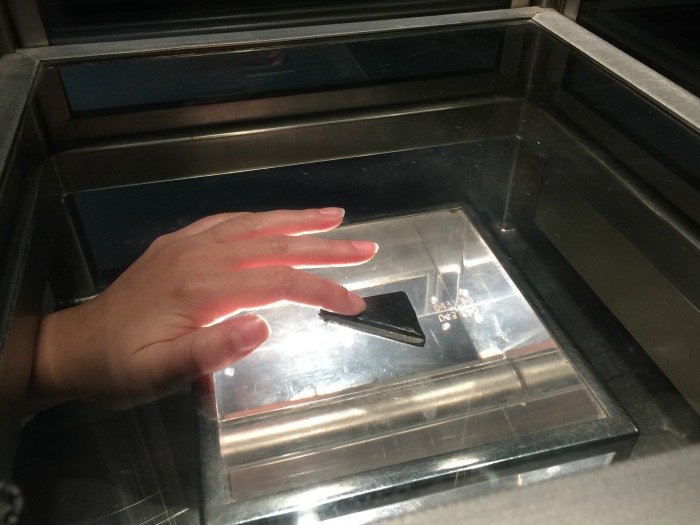 Head on over to the Lunar Samples Vault for an out of this world experience that few can brag about.

Six different Apollo missions brought back lunar rocks to Earth. They are preserved and studied in the Lunar Sample Laboratory Facility at Johnson Space Center, but you can see lunar rocks up close and personal at Space Center Houston.

Fun Fact: This is the largest display of Moon rocks on public display in the world.

There are only eight lunar rocks available to touch by the general public in the world. The one you can actually touch here is 3.8 billion years old. Incredible! 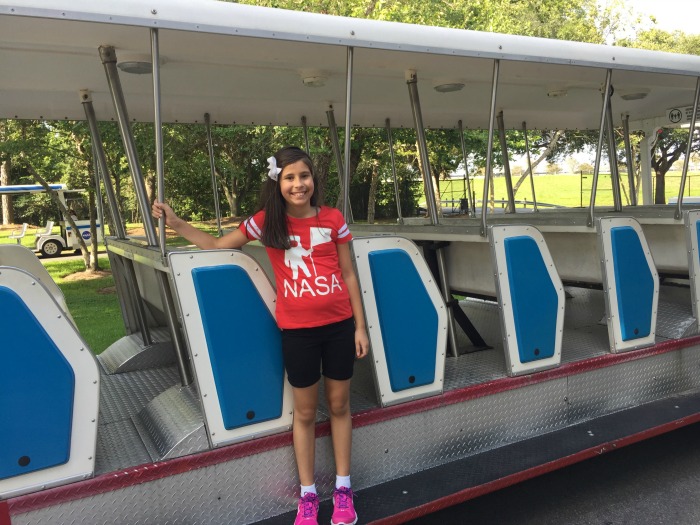 The NASA Tram Tour is included in your admission to Space Center Houston.

TIP: I highly recommend doing this early on in your visit, perhaps after touring the shuttle replica. Lines for the tours can get long and depending on the time of year, it can be very hot and humid as the queue for the tours are outside, though covered.

There are two different tram tours and I highly recommend both.

READ: Be sure to read my Guide to Johnson Space Center to learn more about the tour options and what we saw on our visit. 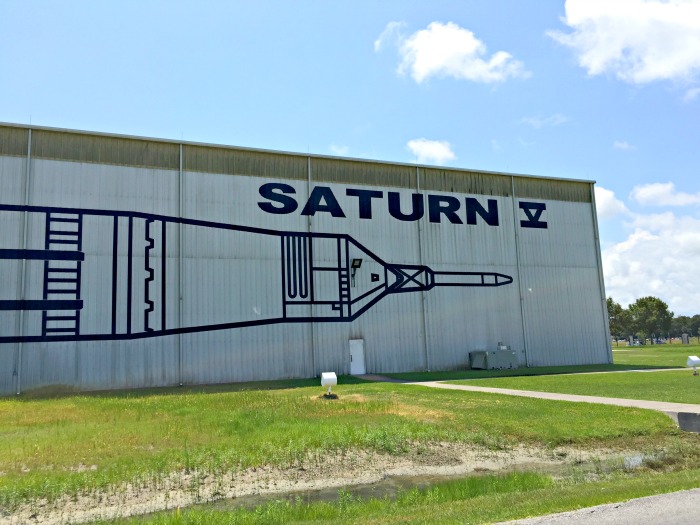 Rocket Park is inside Johnson Space Center and accessible during your tram tour.

Every tour stops at Rocket Park on the way back towards Space Center Houston. Here you will find one of only three of the remaining actual Saturn V rockets along with other rockets.

If you take both tours, you will likely want to stay on your tram the second time around and skip a stop at Rocket Park.

More on Rocket Park in our next post during this space series. 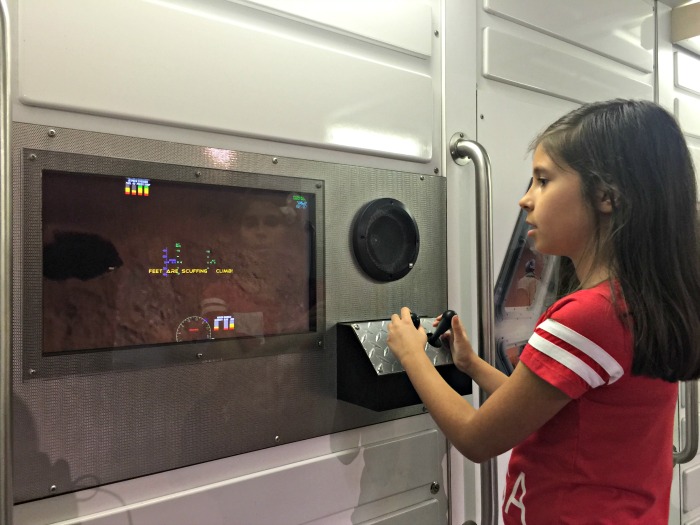 If you find the kids getting a bit restless during your visit, maybe after one of the tram tours, you’ll want to head back inside the main area of Space Center Houston and head upstairs.

Note: If you are not visiting with kids, still head upstairs though you may think it’s just a play area. Trust me.

Upstairs you will find interactive activities for both kids and adults, many of them computerized, just like it would be on a shuttle.

You can practice docking at the International Space Station or landing a space shuttle. It’s not as easy as you think. Ask me how I know! 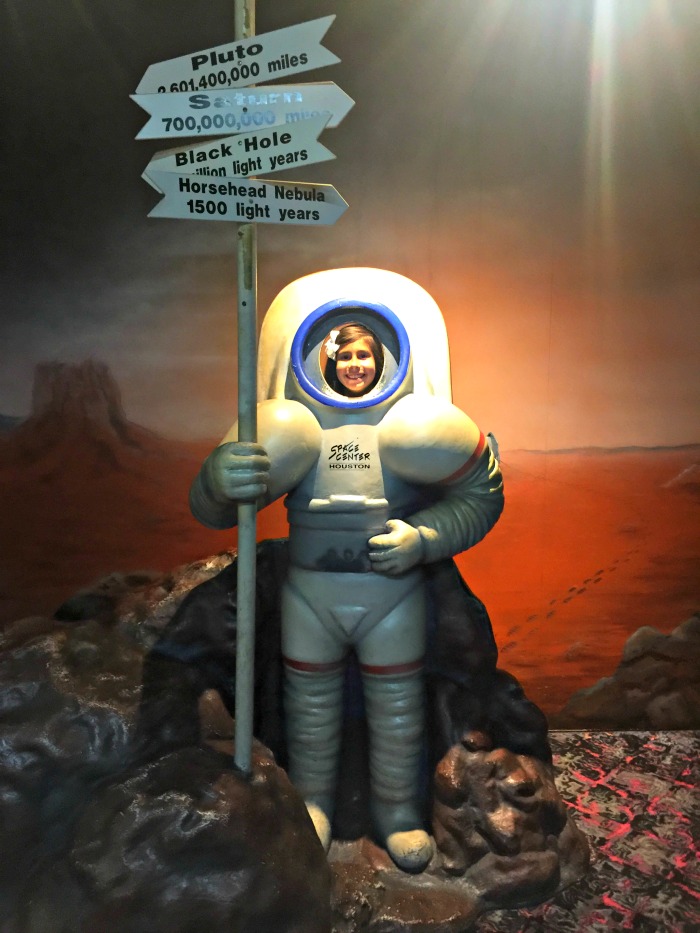 The photos opps upstairs are pretty awesome and Instagram-worthy. 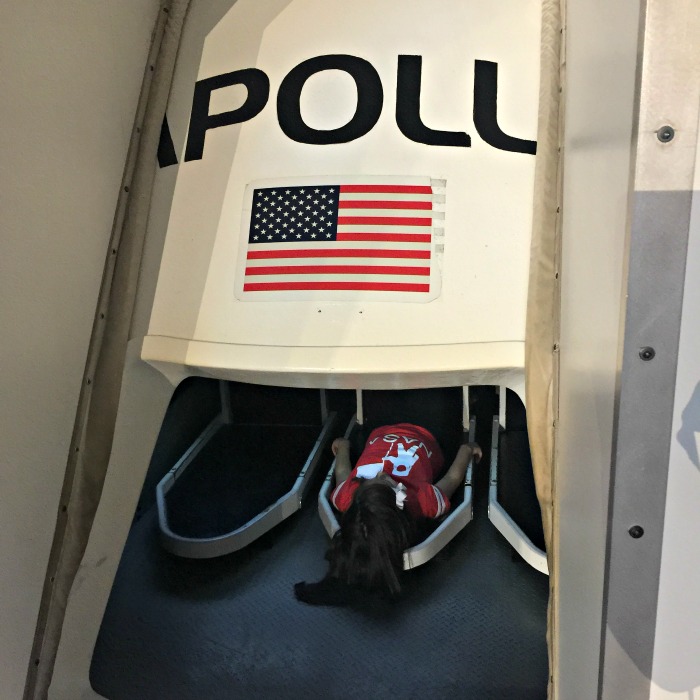 And you might get the opportunity to just climb inside and see if you have what it takes to go up in space.

I decided unequivocally that I am not cut out for it. Apparently I am not a fan of incredibly small spaces.

During our visit we had the opportunity to listen in on a talk about the International Space Station. We learned who was currently on it and from which countries. It was fascinating learning about what roles they had assumed and what the goals were.

While we didn’t partake, there was also a special screening of a space related PBS movie after the center closed. Be sure to listen to any overhead announcements where we learned of the screening. 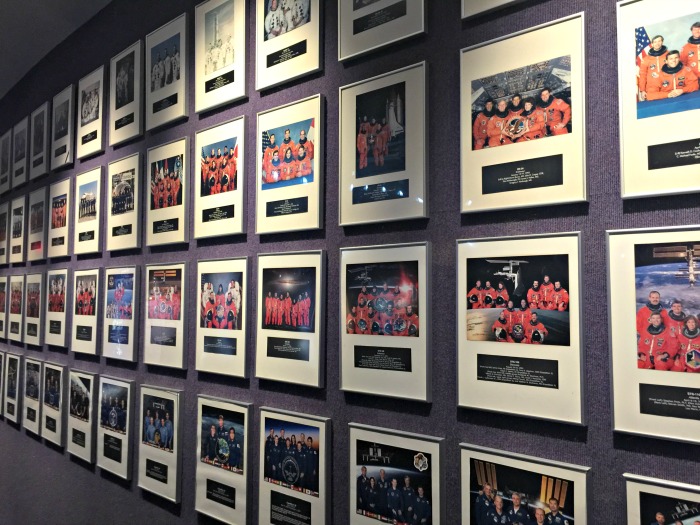 My daughter didn’t grow up with space shuttles, so I found myself teaching her what I knew, what I remembered.

I’m a kid of the 80s, so I remember exactly where I was when I learned about the devastating Space Shuttle Challenger tragedy. As I sat looking at pictures of every shuttle crew, I couldn’t help but get choked up. It wouldn’t be the first time during that day.

Spend some time in the Astronaut Gallery. See some of the suits they wore.

See an Actual Spacecraft or Two or Three 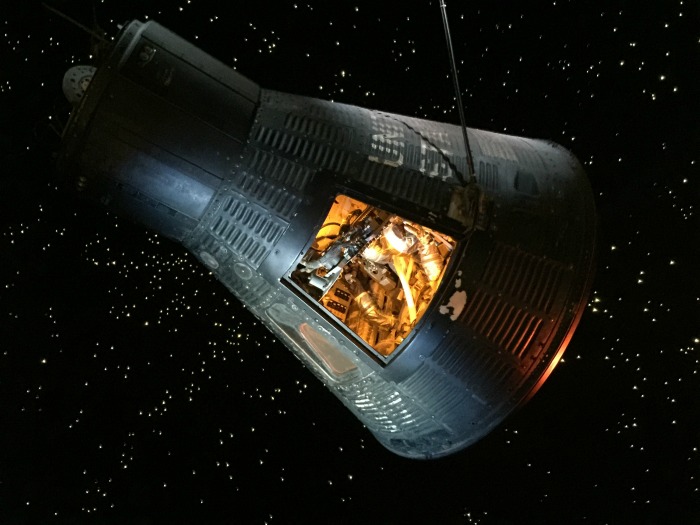 I had no idea when we visited that we would actually see spacecraft that flew in space. I was in for a real treat.

3 actual crafts that flew in space are found at Space Center Houston, including this Faith 7 Mercury capsule, Gemini V, and Apollo 17! There they were in front of me and I could hardly believe it. You could even see damage which happened upon re-entry.

So surprising to see how small these early space capsules were…you had to be petite to fit inside. 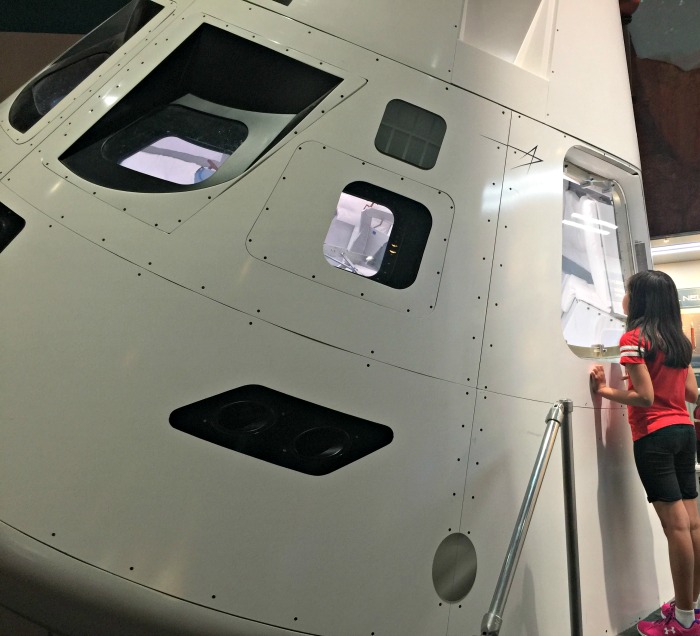 One of the most exciting exhibits we discovered was Mission Mars.

Here you can stand beside a scaled model of NASA’s Space Launch System (SLS) or do as my daughter did and peer inside a full-size Orion research model used by NASA engineers. Can you imagine being inside that for an extended period? Yikes! 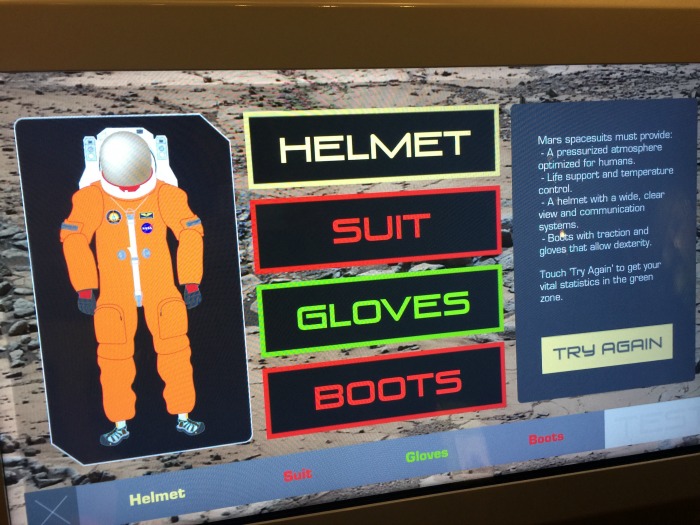 This area was completely interactive and great for students. Whether learning about the conditions on Mars or what you would have to wear in order to survive, it was a great experience. 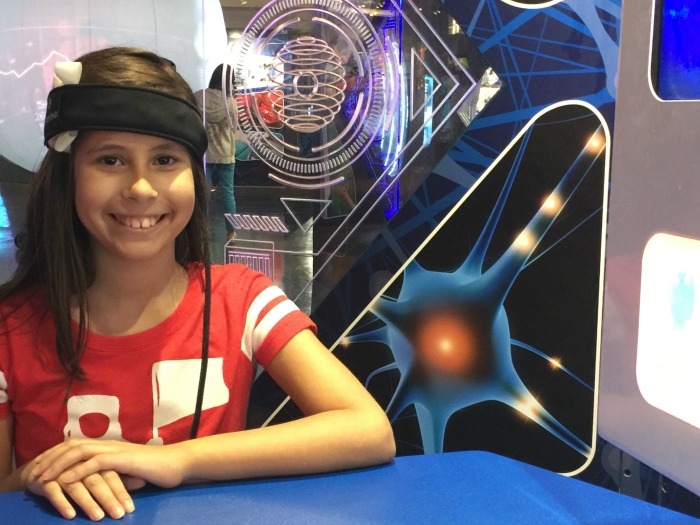 Changing often, you will definitely want to participate in the limited time exhibits. They are perfect for students, interactive (here she was mind-reading, so to speak), and one reason that Space Center Houston never gets old.

A visit to the gift shop on your way out is always fun. You can stock up on the Astronaut food or find a few great souvenirs.

When we returned home I surprised my daughter with a few items to help her remember our trip, like this rocket construction set (we had seen Saturn V at Rocket Park) and Nanoblock Astronaut Building Kit.

Coming Soon in this Space Series: 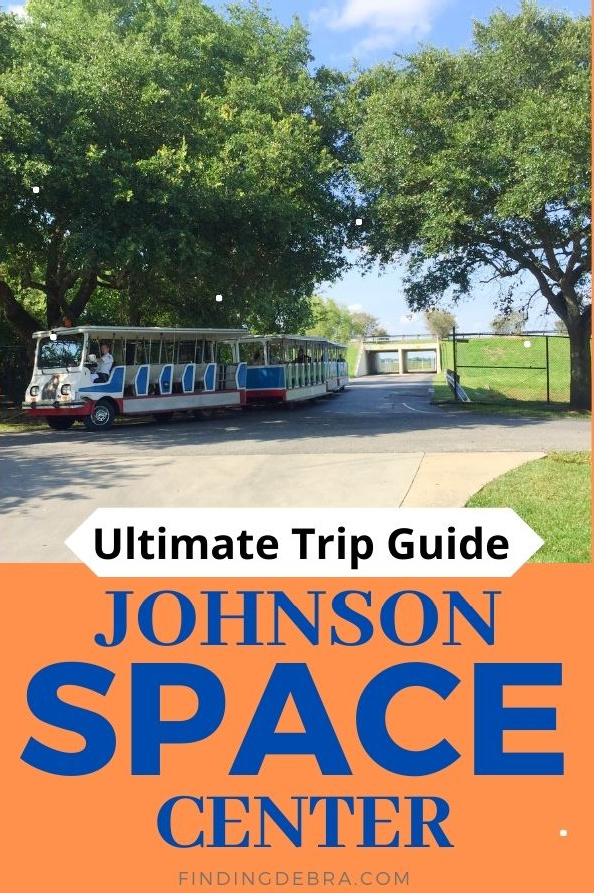 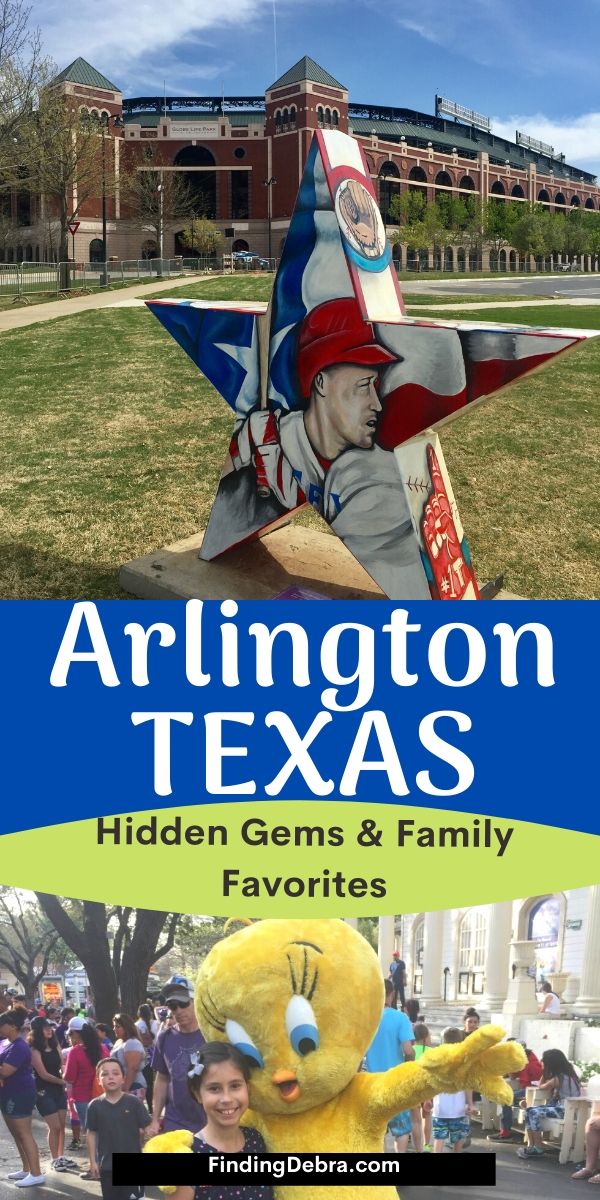