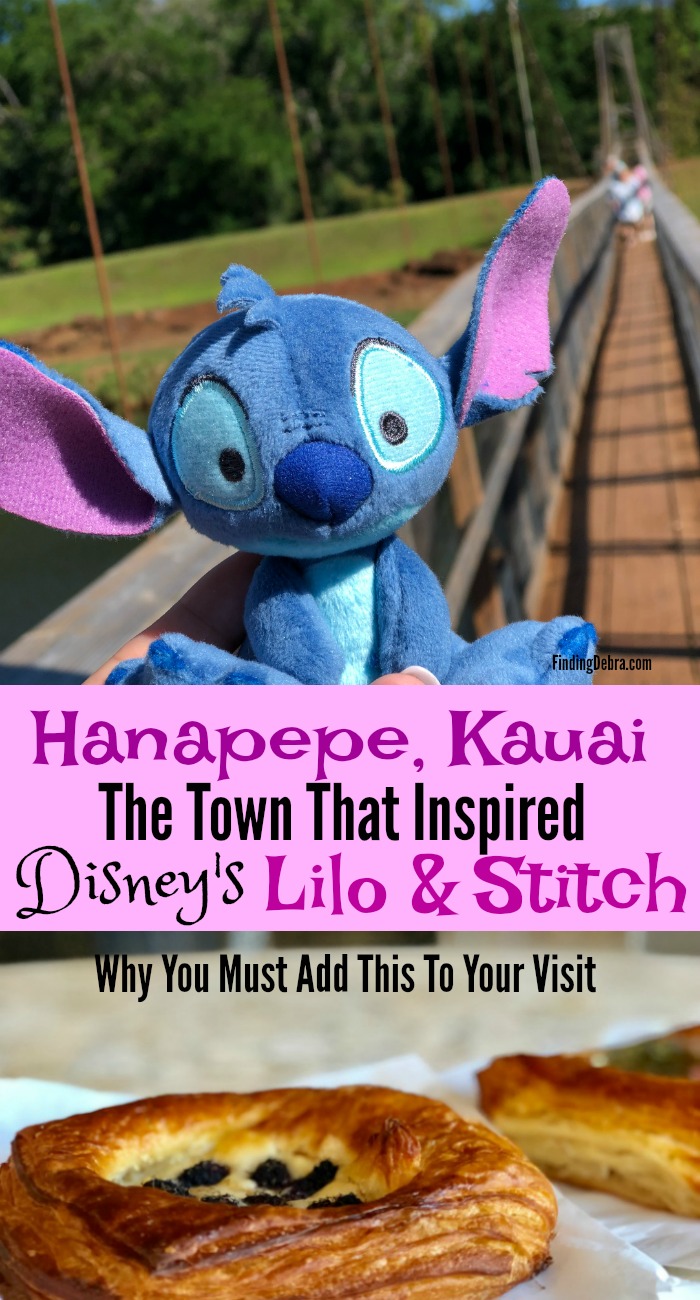 During any bucket-list trip we love to visit the most-visited tourist attractions. In the last few years, however, I’ve discovered that it’s just as important to take a day and explore lesser-known places and towns. Kauai was no exception.

When I made a recent trip to Kauai in celebration of the 25th anniversary of Jurassic Park, in partnership with the island of Kauai, I had one day where I spent time seeing things that weren’t on the official press itinerary. First and foremost was a visit to the small town of Hanapepe.

(Affiliate links in post where a small commission may be earned for any purchases made.)

Why Hanapepe? It’s likely not a town you’ve ever heard of, having a population on the island of just a few thousand people. Though I highly recommend a stop for all visitors (and I’ll share why), it’s a must-see spot for Disney fans everywhere.

Hanapepe, Kauai is the small town which served as the inspiration in Disney’s animated film, Lilo & Stitch.

A Must For Disney Fans

The film, released in 2002, was nominated for Best Animated Film at the 2003 Academy Awards, and remains popular today with an entire franchise of entertainment plus fun at Disney Parks too (you can have breakfast with Stitch at Disney World’s Polynesian Resort – it’s fabulous).

The plot centered around a young Hawaiian girl, Lilo, who is raised by her older sister after her parents have died.

Lilo meets and “adopts” an interesting out-of-this-world character, Stitch, and their relationship, through a series of adventures, teaches us about the Hawaiian concept of ‘ohana. ‘Ohana means family. 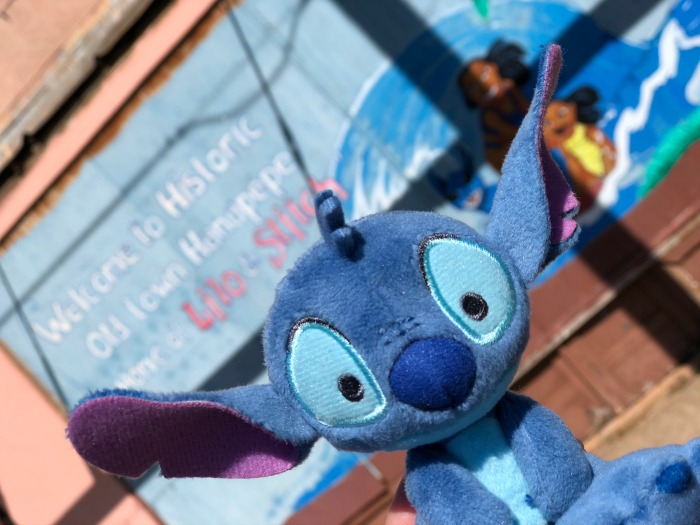 I chose to travel to historic old town Hanapepe on a day that I would be heading to the southwestern part of Kauai, making the trek up to see Waimea Canyon, the “Grand Canyon of the Pacific”.

The sleepy little town is one that you could easily drive through without knowing it.

I wish I could have been there when Disney Animation scouts were driving throughout Kauai. Having interviewed Disney directors and producers many times, I know the great pains they take with their research. They travel to exotic locations. They immerse themselves in the culture. They learn the traditions. Having now spent much time in Kauai, I realize what they saw when they came upon this place.

It’s small and close to the ocean, yet most of it beyond the beaches. It’s where you would raise a family, far removed from the resorts, golf courses, and tourists.

In my mind, I could see Lilo, her older sister, and her parents living here as I passed by small shops, a pitched roof church, and green hills.

But you wouldn’t know this was the home of Lilo & Stitch, except for one thing. 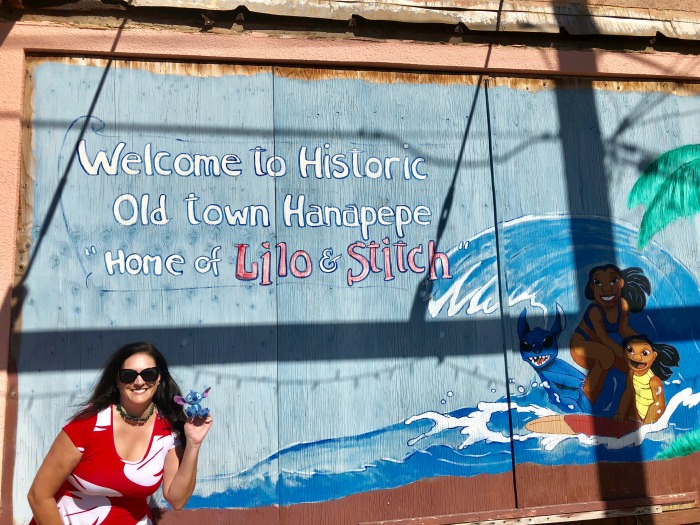 If you drive too fast, you might miss it. I was ready though, in my Lilo-inspired dress and necklace, with a little Stitch of my own.

On the side of the main road, just a few hundred yards from the historic swinging bridge, you’ll discover the only nod to Lilo & Stitch in all of Hanapepe – a mural.

TIP: There is a pole in front of the mural casting a large cross shadow on it. This made photographs difficult, as you can see. These photos were taken in October, late morning. I would venture to say other times of day might be better.

Hanapepe has stayed true to its roots. The town is still small, not relishing in its movie fame. It’s not touristy, but a tourist will love Hanapepe. 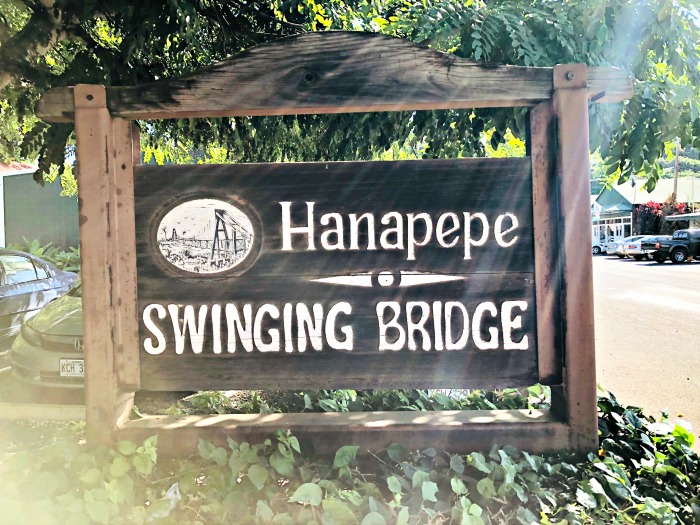 Hanapepe is far more than just the inspiration of an animated movie.

I would recommend a quick stop in the town for a snack and some sights.

First up, the historic Hanapepe Swinging Bridge, which was originally built in 1911. The entrance to the bridge is right off the main road in Hanapepe. We parked right on the main street and quickly saw the sign. 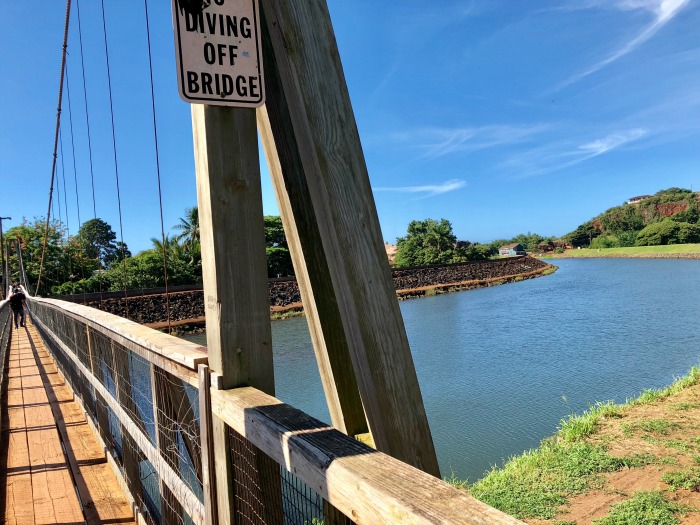 The bridge had to be extensively built and is still used by local residents to cross the river.

The views from the bridge were beautiful.

But I had to get on the swinging bridge, didn’t I? When in Hanapepe… 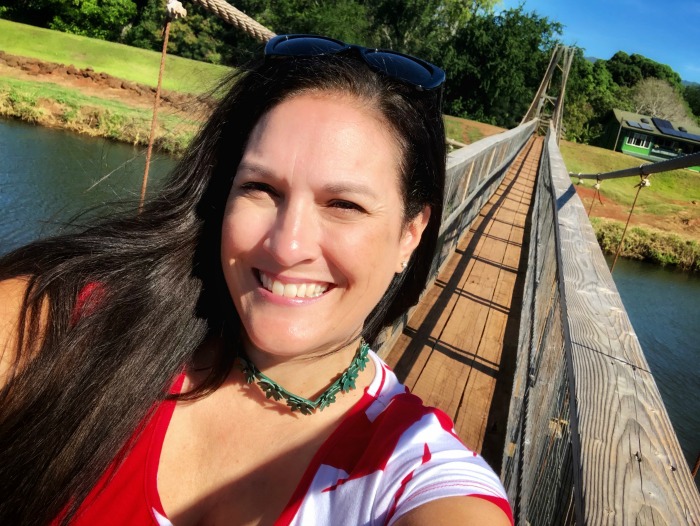 I learned that I much preferred it when the teenagers stayed off, but alas, I was soon joined by a group who unintentionally made the bridge move quite a bit. I can proudly say, however, that I made it all the way across the river and back, along with Stitch. 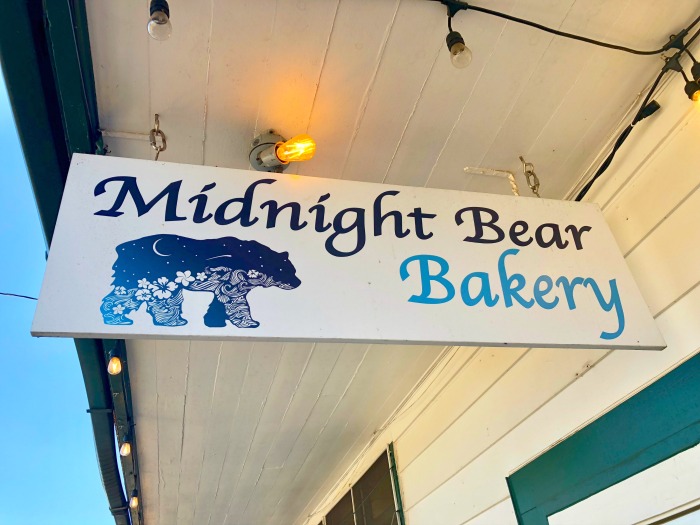 After your courageous walk, head across the street for a snack. You’ve earned it after all!

It is at the Midnight  Bear Bakery where you’ll perk up with either a sweet or savory treat. 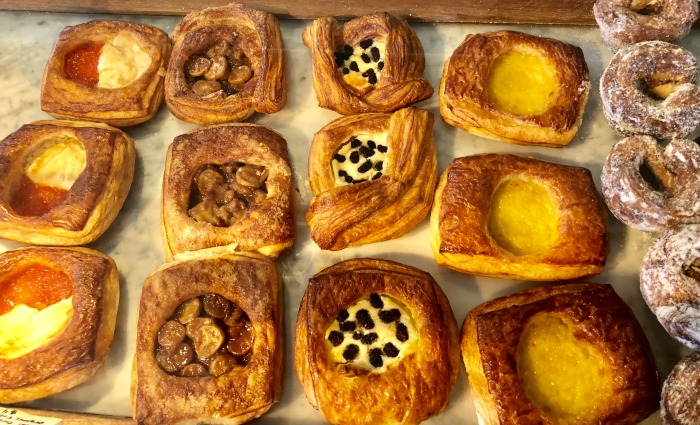 Though you can order deli sandwiches and paninis made with their artisan 100% organic flour breads, I highly recommend their sweet and savory danishes.

It was difficult to decide which to order, so I picked two. 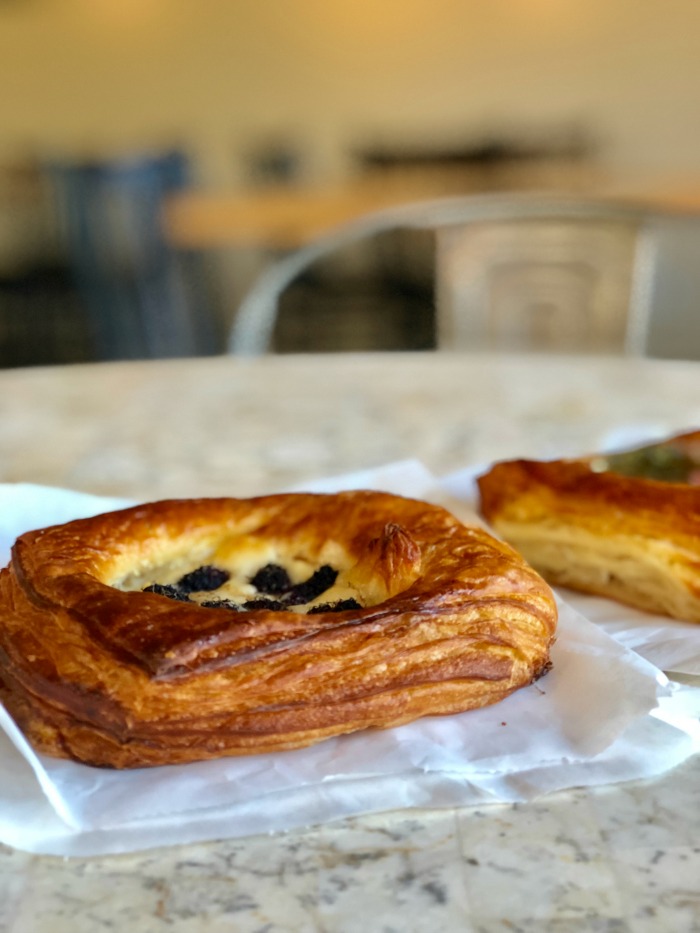 Funny story – I wasn’t quite sure what was on that mulberry danish – they looked like bugs to me! Rest assured those were local mulberries, something I had never seen or tried. I’m glad I did.

TIP: If you are looking for a heartier meal, head steps away to Bobbie’s, where you’ll find everything from Fried Saimin and Fresh Ahi to BBQ Pulled Pork Sandwich and Shrimp Plate. 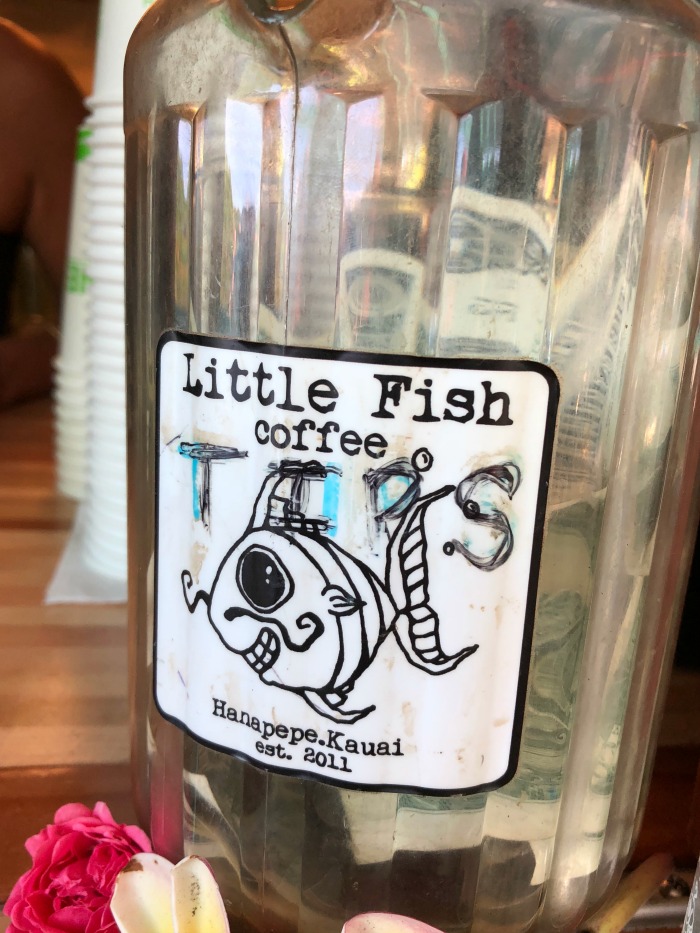 Though you can certainly find coffee and tea at Midnight Bear Bakery, you might want to opt instead for a trip over to Little Fish Coffee.

Hanapepe Town is the location of their original coffee shop, with a newer location in Poipu, closer to resorts. Though we didn’t get a chance to stop by while in Hanapepe, I did stop by the Poipu location earlier that day and LOVED it. I highly recommend the Honey Nutmeg Latte. 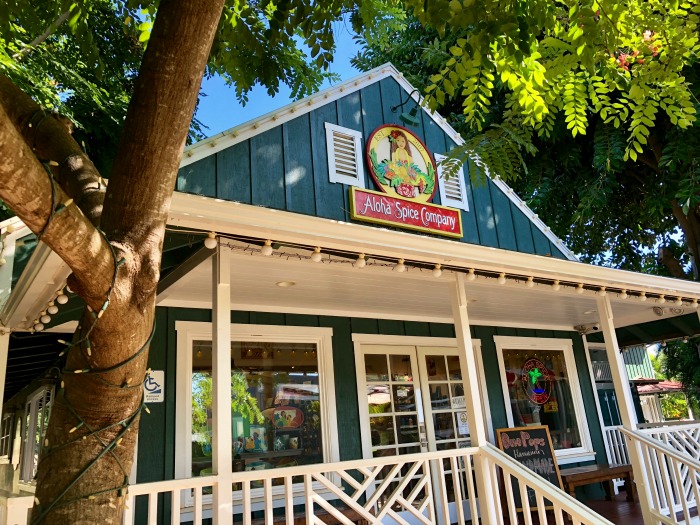 Aloha Spice Company products were something I found in many shops all over the island, but I was pleasantly surprised to find this stand alone store right in the heart of Hanapepe.

You will want to shop here for some great coffee rubs or Hawaiian sea salts to take home to friends and family. Don’t forget some for yourself! 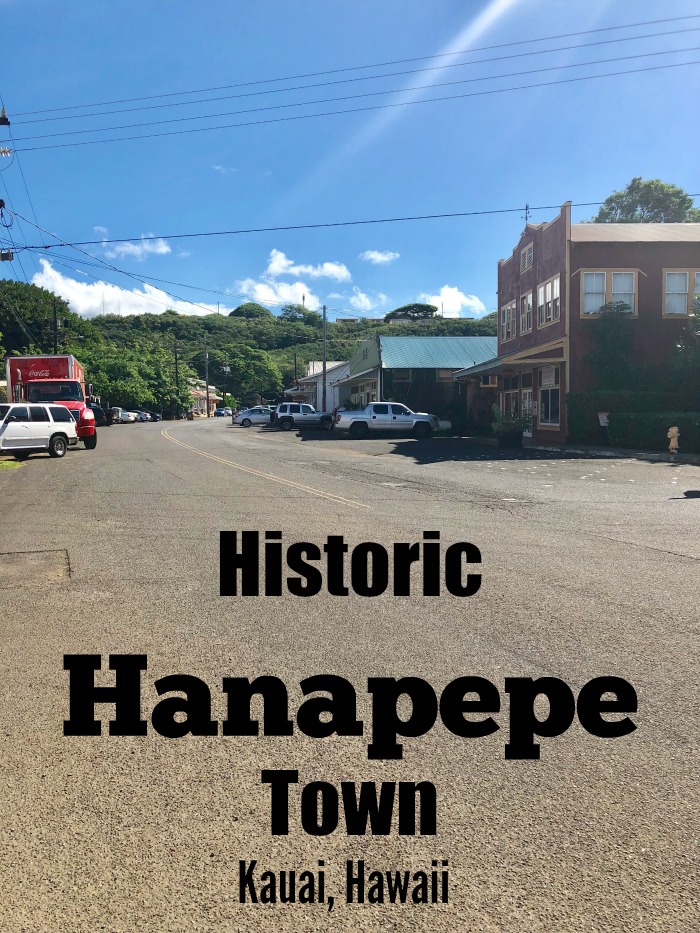 Hanapepe is one Kauai hidden gem you won’t want to miss. It’s authentic Kauai and the perfect stop on the way to Waimea Canyon. 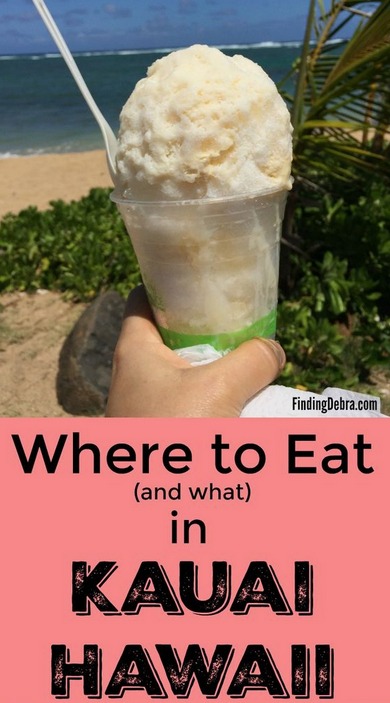 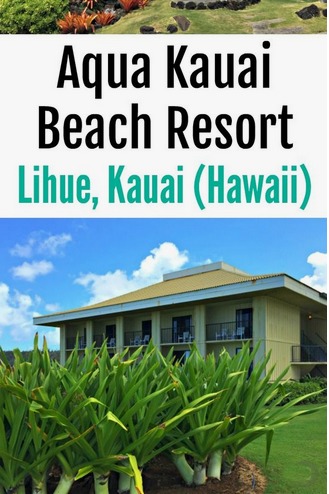 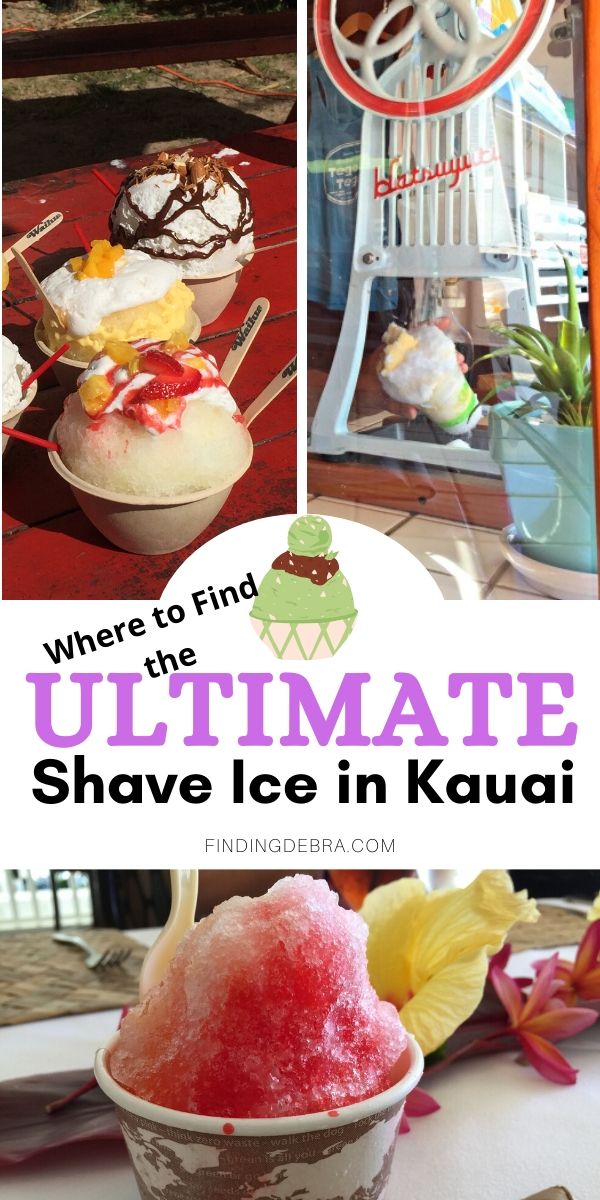