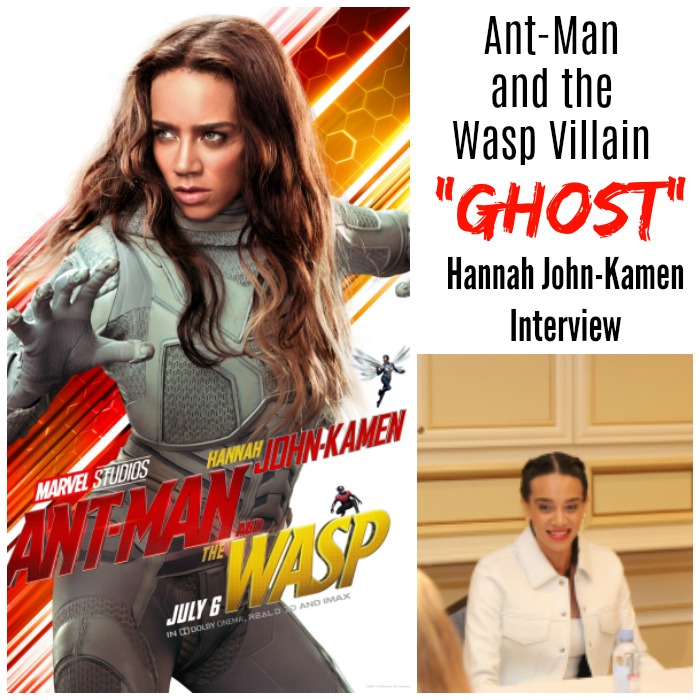 I remember seeing the image on my computer screen for the very first time. Ghost. Newest Marvel villain.

I knew instantly that this villain would be feared by children everywhere, maybe even a few adults. With a ghostly off-white/pearly-gray “uniform” of sorts, face covering, and ability to go through walls, this villain had some serious potential.

What I didn’t realize during that first trailer screening was that Hannah John-Kamen, Ghost, might not be the villain that I was expecting. And she was the perfect actress to attempt it in Ant-Man and The Wasp.

(Disney, Marvel Studios, Freeform & Disney Junior invited me to California on an all-expenses paid trip, in exchange for our coverage of events, including this Hannah John-Kamen Ghost interview. As always, all opinions are my own.)

Hannah John-Kamen Ghost! Villain or No?

Turns out that Ghost is not really a new Marvel villain after all.

This elusive foe came directly from the comic books, so Marvel loyalists might recognize the name.

Surprisingly, in the comics the character didn’t have much of a backstory. Enter Marvel.

Marvel describes Ghost as one who “poses the biggest threat to Hank and Hope as they try to unravel the truth from their past, but when Scott joins in he, too, becomes a target. Her reasons are personal, and Hank’s newest piece of technology is at the heart of it all.”

Ghost’s ability to go through walls and be completely intangible is quite impressive and pretty startling at times.

Hannah John-Kamen – On Joining this Universe

With a beautifully brilliant British accent, Hannah John Kamen swept into our interview wearing colors eerily reminiscent of a ghost.

She admitted she was keeping the theme going as she sat down among us, relishing in this moment, and taking in the gravity of what she has joined.

John-Kamen shared, “I was so excited to join the Marvel Universe, but it was also daunting. It’s overwhelming. It’s a huge responsibility to take this amazing character off the comic book page and be the first person to introduce it into an incredible movie with incredible cast members, which, you know, they’re heroes in life. They are legends. So, yeah, it was amazing. Very exciting.

It wasn’t difficult for her to want to join the Ant-Man family as she was a huge fan of the first movie. The process involved an audition tape first, then heading to Atlanta for a camera test, where she met Director Peyton Reed in person.

She said, “I just had so much workshopping this character with Peyton for the day. I could’ve let loose and really had fun with her. And I kinda came away and I said, ‘listen, if I don’t get this, that’s okay, because I had the best day ever.’ I don’t regret one minute of it. And, and then I get a call saying, ‘yeah, you got it.'”

And then she did what we all do with HUGE news – screamed and danced to Miley Cyrus! HaHa

New Spin on an Old Character

Ghost as a Marvel villain originated as a male character. Yes, Marvel is taking license here and taking a new spin on an old character with making Ghost female!

Funny thing. Hannah John-Kamen didn’t know that the character was originally male until she googled it.

For John-Kamen, this was an incredible moment, to “be the first person to lift it off the page and give her life, and make her a strong, badass woman, which is so important and progressive and onwards and upwards with that.”

Just like in the comic books, Ghost didn’t have much of a backstory, so Marvel wanted to change that. John-Kamen realized, “We really have the freedom to create this character and find out who she is. So, that was fun.”

I was curious about that backstory (though I won’t divulge that here for obvious reasons), and had the opportunity to talk with Hannah John-Kamen about helping shape her own character.

Though the main themes were already fixed, she shared that “the script did change and adapt” because they were all figuring out the character together. Things changed along the way as she helped “massage the character in certain ways.” A talented actress indeed.

Channeling the Rage of a Villain

Playing a villain has to be pretty interesting I would imagine. It’s almost as if you get to let everything go and be the worst possible you, right?

Hannah John-Kamen said the magic, well, “It’s the words. It’s the scene. It’s the stakes. The stakes are so high. And I think that’s what Peyton has done an amazing job of. He guides you so well. And with this film,  you’ve got that balance between romance — there’s a love story —  fatherhood, parenthood, action, high-octane drama. He taps your funny bone. It’s hilarious. But then also it’s heartbreaking.”

She continued, “You literally are, as an audience member, kind of jumping between the two. And it’s amazing.”

This is something my husband and I have been wrestling with, especially since watching Avengers: Infinity War months ago. Thanos gave us pause. He is most definitely a villain, but you started to see the reasoning behind his choices.

Hannah John-Kamen weighed in on the discussion, adding, “I think everyone’s redeemable. I really do. I think Marvel does that genius job with the villainous characters to really not make it black and white. They make it gray. They make it kind of like you kinda feel sorry for them. You’re kind of on their side. You kind of confuse yourself as an audience member and go, ‘hold on a minute. Why am I rooting for this person?'”

She then tackled Ghost as a villain and made it personal. She commented that she “approached the character as if she’s the good guy,” adding, “and, through my eyes, she’s the good guy. And through the protagonist side, yes, she’s the bad. But in my mind, no. She’s got a job. She’s got her objective. The stakes are really high. But in the Marvel Universe, anything’s possible.”

Anything is possible with Marvel. That much I know.

Doing Her Own Stunt Work

Hannah John-Kamen does it all. Really.

She’s got the imagination to take on the green screen (which impresses even Michael Douglas). But more than that, she literally does her own stunts. WHOA!

She talked about having done stunts in her career for a really long time. She added, “I think it’s really important to do as much as you physically possibly can, because the character is what you bring to it, it’s not just emotional. It’s also physical, especially in this Marvel Universe. We all have different powers. We all have different styles of fighting.”

I started to think about all the action scenes with Ghost in Ant-Man and The Wasp, realizing it was HER in each movement.

She told us, “Whenever I do a fight scene I always get this real adrenaline rush. It’s definitely a different kind of actor who can do his/her own stunts. She added, “But every kind of fight scene — it takes time. It takes a long time because you’ve gotta be safe as well. You gotta really be safe. You gotta figure it out. Also with restricted spaces as well, especially like a van.”

Of course her personality shone through when she quickly added, “I love kicking ass.”

Let’s just say I wouldn’t want to get on the bad side of either Ghost OR Hannah John-Kamen!

The Women of Ant-Man and The Wasp

It’s clear that the women of Ant-Man and The Wasp have a lot to say on the subject, and Hannah John-Kamen is no exception.

She wants young girls to have their action figures and play with them and know that they too can be just as strong!

Having met both Hannah John-Kamen and Evangeline Lilly in person, it was easy to imagine them saying “Girl Power” and high five-ing each other.

With Michelle Pfeiffer, I get the impression that it was a bit different. Hannah John-Kamen was a bit star struck with her. She told us, “I’m a huge fan. I remember actually in Grease 2 me and my sister used to make up dances in front of the TV to all of her songs all the time. I was obsessed. I was obsessed with her Cat Woman. I thought she was so badass. I thought she set that bar so high. She’s an incredible actress, you know, all of her incredible movies and, and doing Scarface.”

It’s clear to Hannah John-Kamen (and I couldn’t agree more), that Ant-Man and The Wasp “has so much heart in it.” She added, “That’s what I think separates it. I think that’s actually what’s needed after the devastation of Infinity War. I think you need to laugh. I think you really need to laugh a little bit.” Continuing on she said, “There is a beautiful love story in it. And the characters are redeemable, and there are two sides to the coin. Everyone’s gonna have a lot of fun.”

If She Could be a Marvel Hero, Not a Villain…

The question was asked. And her answer was perfection.

Q: If you could be a hero, not a villain, which character would you be?

Now let’s take a look at the film, and Hannah John-Kamen Ghost!

Marvel Studios’ ANT-MAN AND THE WASP in theaters everywhere NOW

Blog Posts from #AntManandTheWaspEvent so far:

Stay tuned for my director interview with Peyton Reed!