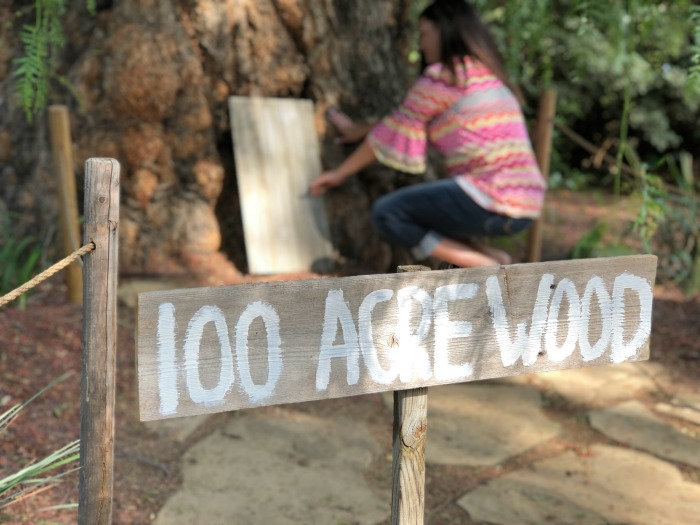 Just last week I did something I never expected in a million years to do. I entered the 100 Acre Wood. Or as I usually spell it, the Hundred Acre Wood. It was the most fabulous experience, complete with friends, great food, and Winnie the Pooh with Tigger too. What? Oh yes, read on, as the Disney legend joined us and I tell all in this Jim Cummings Christopher Robin Interview.

Jim Cummings. A Disney legend in my eyes. Though you might not recognize his name at first, you most certainly know WHO he is. All it would take is one quick glance at his IMDb to see his credits, but the best way to realize you know him is to close your eyes and listen.

Jim Cummings, who I had the privilege of listening to last year at D23 Expo, has been the voice of so many beloved characters over the last few decades. Most relevant here, and perhaps my most favorite, Cummings has been the voice of Winnie the Pooh since 1987 and Tigger since around 1989.

I was going to meet him and I was thrilled. I would no longer be in the audience listening with delight. I would be asking a question. With POOH! Oh, the child in me couldn’t contain myself. I might have even bounced a little. It’s what Debra’s do best! 🙂 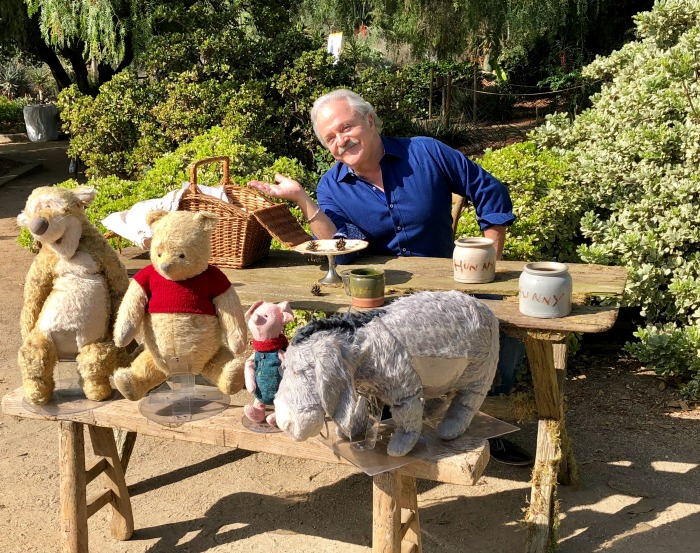 We stepped inside the Los Angeles County Arboretum and Botanic Garden for what was to be our interview and my jaw dropped.

Disney had outdone itself! And that’s kind of hard to do with so many awesome events under their belt.

We were having a Friendsgiving meal in the middle of a shaded part of the garden, almost hidden from the outer pathways and regular attendees. The longest table was perfectly decorated for fall with pumpkins and gourds, but there were plenty of English touches as well – a teapot here, a teacup there. After all, we were meeting Winnie the Pooh! 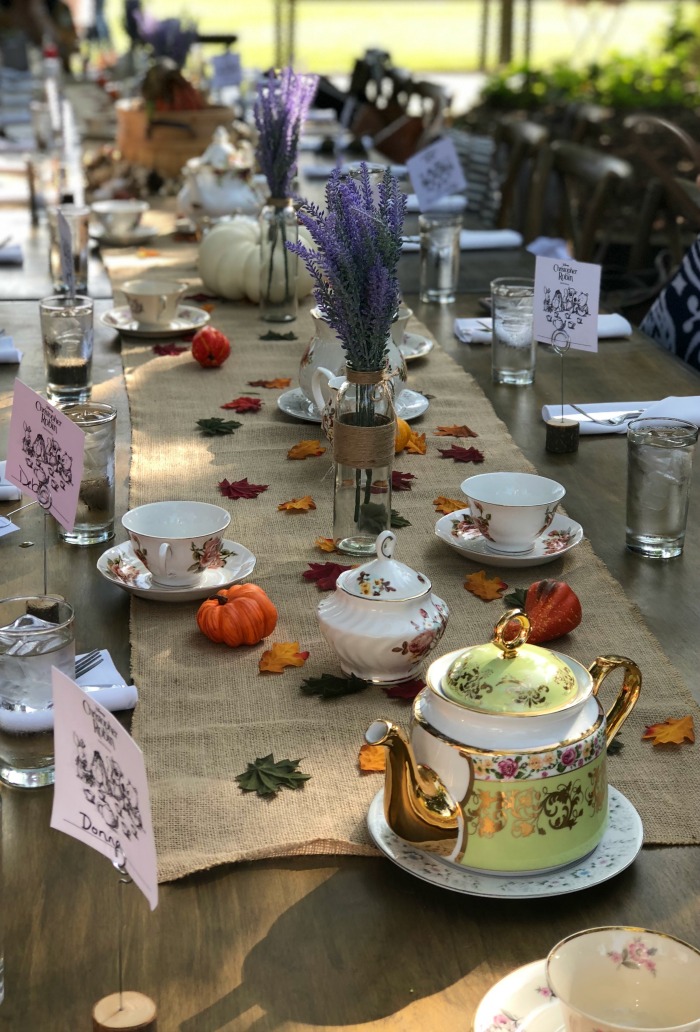 At the head of the table, that’s where Jim Cummings would sit for a magical morning I won’t soon forget.

As he sat down, we quickly realized he had a cold. That might not be much for the average person, we all get them, but for a voice actor that can be tough. I worried we might not be able to hear him voice those characters we so love. Oh, I didn’t need to worry. 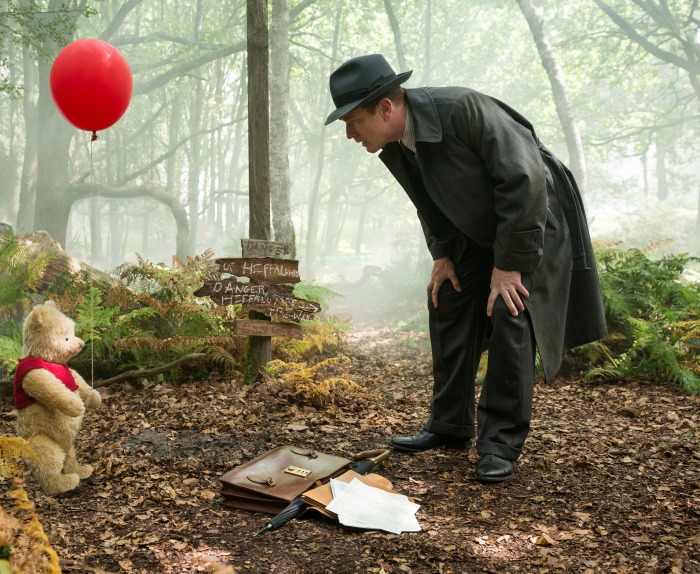 Talking about the movie, Christopher Robin

Earlier this year the movie Christopher Robin came out in theatres and it was FABULOUS (it is releasing on Blu-ray, DVD, etc tomorrow, November 6th – grab it here).

As the voice of Winnie the Pooh and Tigger, Jim Cummings certainly was ready to play the role in this non-animated, live-action movie. What did he think of the premise?

Cummings shared, “I thought it was a great idea, you know. What if Christopher Robin grew up and turned into a person and got stuck working like the rest of us and, oh, my God. What was that? World War II? Oh, wow. Now what? You know, Christopher Robin? Really? It was just so magical. And, you know, Pooh and the gang went out there and kinda saved him. Kind of returned the favor after all those waterfalls that he saved us from. So, it’s great”.

There I was. In the middle of a forest. Next to a tree with a little door (best prop ever). Surrounded by friends at a table. With Winnie the Pooh at the head of it. I felt like I was part of the gang. It was magical. As perfect a morning as I can remember. 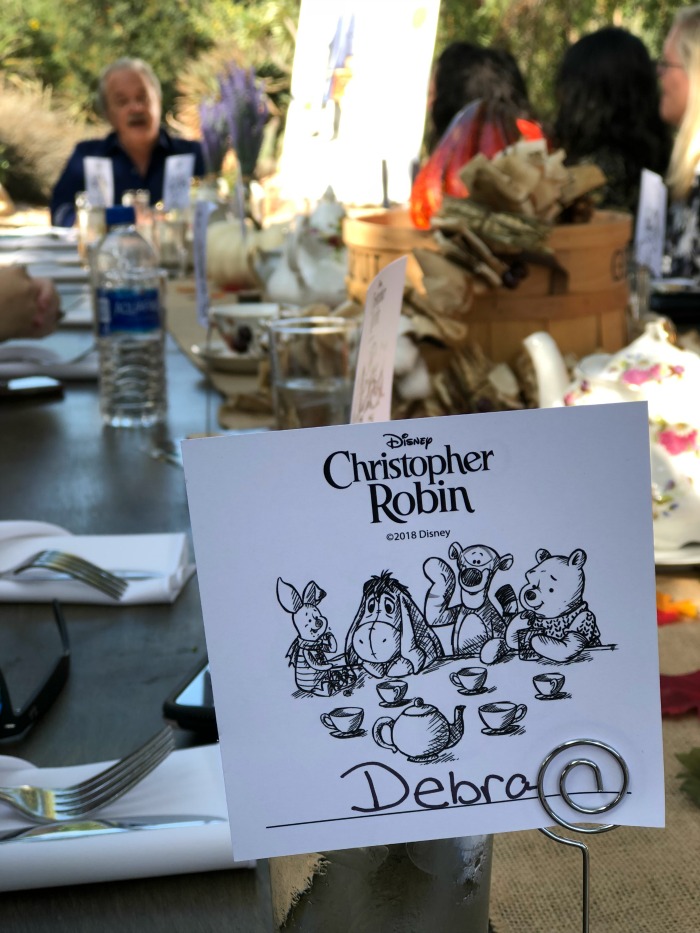 Why was I feeling so nostalgic?

Jim Cummings stated it quite well. He said, “It’s kind of like a pipeline to your childhood almost no matter how old you are”.

On seeing the man who came before

Jim Cummings certainly wasn’t the first Winnie the Pooh. That famous voice had previously belonged to Sterling Holloway, who notably is recognizable for so many Disney voices like Kaa in The Jungle Book and Cheshire Cat in Alice in Wonderland.

One time, well before Jim Cummings was in the voice acting business, he had an interesting run-in with Sterling Holloway.

Cummings described to us a time he was in a practically empty restaurant with his wife. The waitress walked over to a corner booth, talking to someone they couldn’t see, and asked for the lunch order.

Cummings then acted out the next line, which came out of someone in that booth – “Well, yes, I believe I’ll have the chowder,” said in the most Winnie the Pooh voice there ever was. There was Sterling Holloway in the flesh, who had retired and moved to Laguna Beach.

So Cummings is often reminded of that when people approach him. 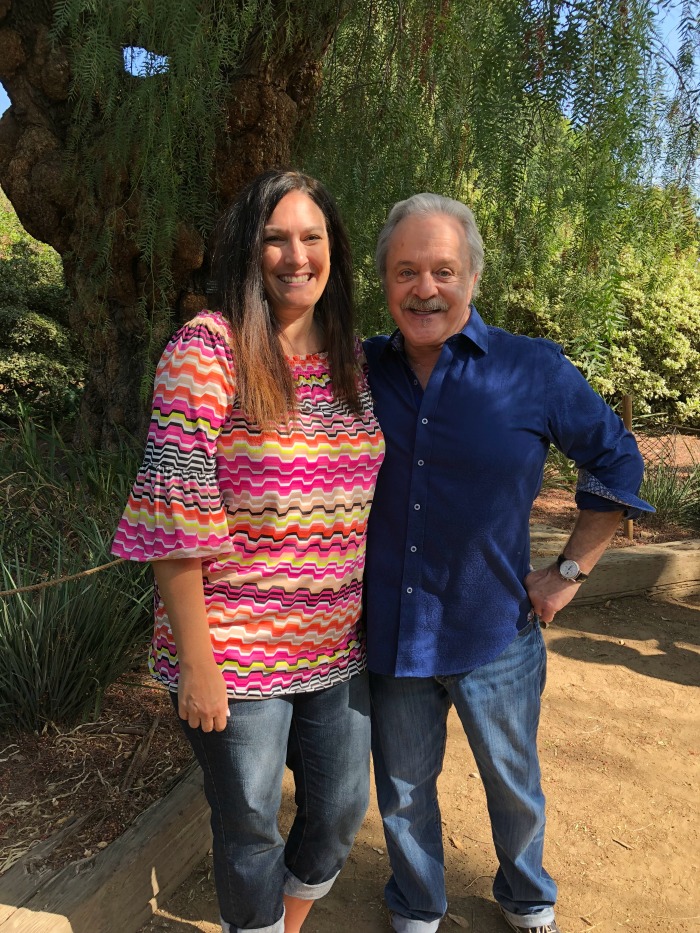 The humor is very real

Though Cummings might be a voice actor, he is quite the comedian. When asked if the process of recording for Christopher Robin was different than for an animated picture, his answer had us in stitches.

Cummings responded, “Yeah, it was. It was hard fitting into the costume. But I managed, obviously. You couldn’t tell, right? I had to lose a little weight.”

I like to goof off at bedtime. Or I should say, my daughter’s bedtime. Apparently my husband is a better story-teller than me, making up things out of thin air. But me, I’m the goofy one who reads stories I didn’t create, in crazy voices with fun costumes. I dare say it doesn’t always make for an early bedtime.

So with Jim Cummings I was curious and had the opportunity to ask, “When did you first know that you could do voices”?

Cummings shared, “I don’t know. I started off as a really annoying child. So it was probably very early on. I was, you know, [imagine him making a dolphin call here] doing dolphin noises. And, you know, “We don’t have dolphins here at Sister — at Saint Columba,” said Sister Mary Agnes. Well, they do now. So I was always that kid. And when I was a kid, I enjoyed being in plays, but I would want to be the ogre or the hermit or the weirdo or the wizard instead of the little prince, you know”.

He continued on, “So, I was probably inadvertently doing research for this now. ‘Cause, you know, guys like me we’re all character actors really. We’re just doing characters, and that’s kinda what they sound like”. 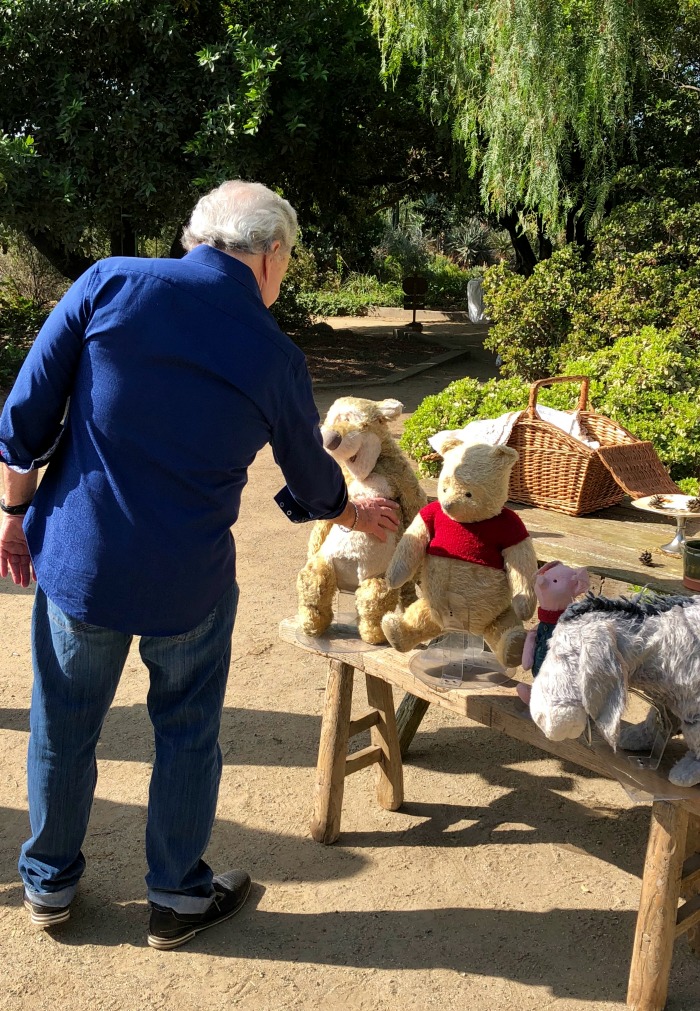 Disney characters he relates to most

At one point during the morning, all of us, including Jim Cummings, ventured over to a small picnic table where we could see and be photographed with original props from Christopher Robin.

I had a front row seat, so to speak, when Cummings walked up to his friends. I snapped this photo when he reached for Tigger. I now know why he did.

When asked which of his Disney characters he relates to most, he shared a lot, because well, it’s hard to pick among his favorites.

Then he added, “I like Hondo Ohnaka from Star Wars Clone Wars. And that didn’t used to be a Disney — but he’s a Disney character now”.

But still there was more. Cummings shared, “And, honestly, Ray from Princess and the Frog is one of my favorites all-time. You know, my little girl Gracie, you couldn’t’ve told her that she wasn’t Princess Tiana when she came out, you know”.

He got personal as he shared, “She adopted me, you know, this beautiful little black girl. And she was four years old. Princess Tiana was four years old. And she and Anika kinda bonded. Anika Noni Rose, you know, Princess Tiana. And so that was very touching. So, I don’t know. I guess I have like five. It’s like which of your five kids are your favorite? Well, all five, you know. Well, but there are more”.

Cummings added, “I always joke I’m Winnie the Pooh and the anti-Pooh, ’cause I’m Tasmanian Devil, too. No relation to Pooh, not in the 100 acre wood. He would just eat it”. 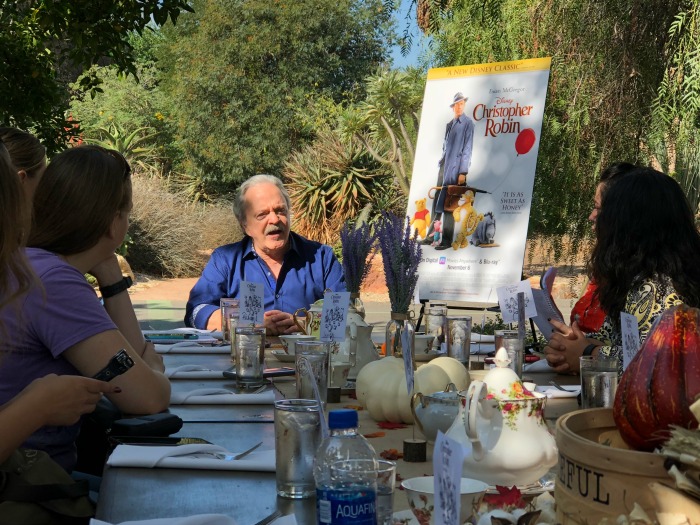 The gift that had us in tears

The tears were about to flow as Jim Cummings got incredible personal about this gift he’s been given to bring light into others lives.

He shared about one little boy from Washington. His age, 11, which personally struck a chord as a mom.

It had been suggested by the boy’s therapist that a call in to Jim Cummings might be beneficial. Why? We were about to find out.

The boy it seems was very good at picking Jim Cumming’s voice out in commercials, like one Wheaties commerical mentioned. So the two began their phone conversation with a lot of suggestions from the boy about what characters Cummings really should voice in the future. The boy kept talking. And talking. And 45 minutes later Cummings asks to speak to his dad.

Eventually the mom gets on the phone and they chat for a bit. Cummings said about the length of conversation, “You know, it’s okay. You know, I would’ve done the same thing if I was talkin’ to Bugs Bunny at his age”.

But the mom startled him by saying, “No, you don’t understand. He doesn’t speak. He stopped when he was three”.

He was now 11 years old. That was just one story.

A true gift, that is what Cummings has.

When asked about his most emotional scenes, Cummings was clear there has been more than a few.

He shared, “Ray from Princess and Frog, when he passed away, that was the hardest thing in the world to do. I don’t know why. You wouldn’t think so, but that was really, really hard to die. And it was just like, you know, my voice, but it was really emotional. And there was a song from The Search for Christopher Robin, in the ‘90s and Wherever You Are. And it was kind of that somewhere out there moment.

He went on, “We’re singing ‘wherever you are, I’ve been lost and lost without you’. And in fact that’s where the quote ‘you are stronger than you seem, braver than you believe’, the movie that one came from. And that was very, very emotional. There were a lot of moist eyes in the studio that day. Yeah, there’s been a few of ‘em, yeah”. 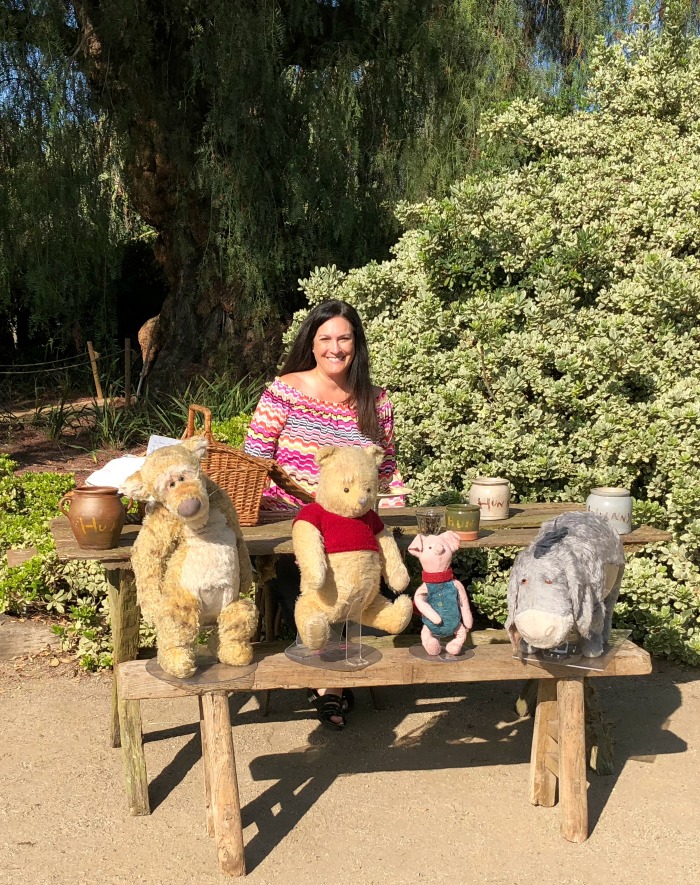 A message for kids

One things stands out as a little message for kids about his voice and how he protected it. Cummings said, “I’ve never smoked a cigarette yet”. 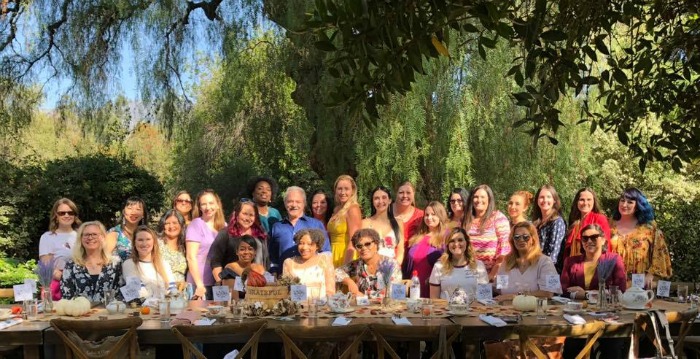 What a morning spent with Jim Cummings. I will treasure my time with him always.

Pooh. Tigger. Whenever I sit down to read The Many Adventures of Winnie the Pooh, I surely will look at it differently now. But I will still get all goofy and try my best to sound like Tigger. Always have. Always will. My inner Jim Cummings coming out to play!