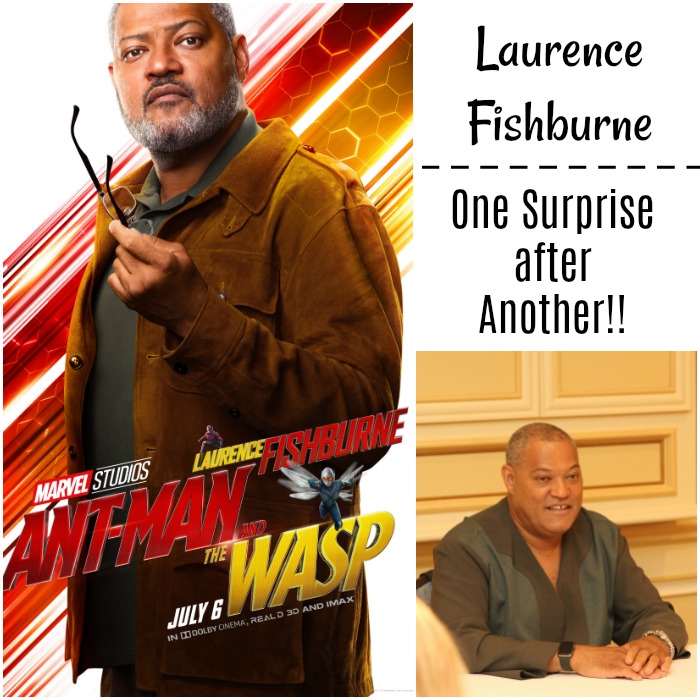 Yes, that’s how I would describe Laurence Fishburne, after having the pleasure of sitting down with him last week on the outskirts of Los Angeles to talk about his role in the new Marvel release, Ant-Man and The Wasp.

Upon first impression, Laurence Fishburne surprised me. Having only seen him on the big screen, I expected a somewhat larger than life bad-guy to walk in the room. Of course that’s not who walked in. That man was Laurence Fishburne, incredible actor, father, and very complimentary person who spoke highly of our work.

The next minutes were so fascinating – for Laurence Fishburne, Marvel was in his blood from the very beginning…and in this interview we discovered it all, including a non-spoiler BUT OH MY GOODNESS reaction from him when he finally saw the film. Keep on reading!

(Disney, Marvel Studios, Freeform & Disney Junior invited me to California on an all-expenses paid trip, in exchange for our coverage of events, including this Laurence Fishburne Marvel Ant-Man and The Wasp interview. As always, all opinions are my own.)

Who is Marvel’s Dr. Bill Foster?

Laurence Fishburne plays Dr. Bill Foster in the much anticipated sequel, Ant-Man and The Wasp.

But who exactly is Dr. Bill Foster?

Bill Foster is a former colleague of Hank Pym (Michael Douglas) and Janet Van Dyne (Michelle Pfeiffer), a scientist in his own right. During the course of Ant-Man and The Wasp, Foster reluctantly becomes embroiled in Hank’s plan to reunite his family, as they are hopeful that Janet is still alive and somewhere in the Quantum Realm.
Old animosities bubble up between the two scientists, whose approaches to their mutual research have led them down different paths.

At this point some of you who are fans of the comic books might recognize Dr. Bill Foster, also known as Goliath (in the comics at least)…

What we know right now is that Dr. Bill Foster has a past, one that is very intertwined with Hank Pym’s. It makes things incredibly interesting when you think how this movie could lead to a prequel, something that as a Marvel fan, Fishburne agrees would be “awesome”.

As to whether anything is set in stone right now in the Marvel forecast – I doubt it. Fishburne had us laughing with the standard, “I am not at liberty to speak on such an operation, if in fact such an operation exists”!

Typical Marvel style! But as a fan, and now having seen the character Dr. Bill Foster and Hank Pym together on the big screen, yes, I want more!

If you would have told a young Laurence Fishburne that he would grow up to play among some of the biggest heroes in comic book lore, I’m sure you could have knocked him over with a feather. He was a young child when he first was introduced to comic books – both DC and Marvel.

As early as 8 or 9, Fishburne was a superfan. Trust me when I say he knows his stuff, as he proved it time and time again throughout the interview, mentioning characters that I had never heard of.

As for which is his favorite, DC or Marvel, Fishburne answered just right – “Look, I paid money for both comic books!”

Not Knowing His Character

Oddly enough, Laurence Fishburne was not familiar with Dr. Bill Foster, when it was first talked about him joining Ant-Man and The Wasp.

He had never read Ant-Man, but had grown up loving Spider Man, Fire Man, Thor, Hulk, Avengers, X-Men. Fishburne then met with the director, and said, “we got on really well because he’s also a guy in his fifties who loves comics. It just kind of organically happened”.

Though it might be surprising to us that Fishburne didn’t know Dr. Bill Foster, it’s no surprise that he ended up with a part in a big Marvel film, like Ant-Man and The Wasp.

Why? He wanted it!

His is a story that should remind us all not to wait until something falls into our lap. Though that happens, oftentimes it’s easier to chase after your dream. Do something. Set things in  motion. For Fishburne, a simple request to meet with Louis D’Esposito started it all. After all, he “wanted very much to be a part of the MCU because of the way it was progressing. ”

D’Esposito and Fishburne had both worked on the Disney lot years ago, so a simple meeting wasn’t out of the question. Fishburne was direct, and told him outright that “I’ll do whatever you need me to do, but I really would like to be a part of the MCU if there’s any way that you can see that I can do that”. The next thing you know, he’s being introduced to his future character, Dr. Bill Foster. The rest is history.

NOTE: This wasn’t the first time Fishburne chased after a Marvel role, as he had very directly told Director Tim Story, of Fantastic Four movie, Rise of the Silver Surfer, that he was “Norrin Radd” – a Marvel character. That discussion led to a vocal performance in the movie.

Fun Fact: Fishburne is really looking forward to seeing Captain Marvel but has some ideas about future comic book characters that would be great for the big screen, including a character called Brother Voo Doo and villain the Sandman.

Laurence Fishburne has been  no stranger to playing villains throughout his career. And he said something very interesting to me, “Heroes, villains, whatever it is, as long as you can make them human then it’s fun. You know, that’s the objective as to whether it’s a hero or a villain . You wanna humanize them and allow the audience to have the experience of maybe I don’t like what he’s doing or maybe I don’t like what she’s doing, but there’s something in them that reminds me of me”.

That was such an interesting way to look at things. It’s why I looked at Thanos differently by the end of Infinity War.

On Diversity in the MCU

Fishburne really talked about how Marvel was always inclusive and really doing things as diverse as 1968.

Fishburne remarked, “They’ve been able to take the source material and bring it into the now. To be a real reflection, or at least a closer reflection, to what the real world looks like.”

The photo above says it all.

Just a couple days before we sat down with Laurence Fishburne, he sat down with most of the cast (Paul Rudd, Evangeline Lilly, etc) to watch Ant-Man and The Wasp. Like any good Marvel fan, he knew to pay attention to the post credit scenes.

I’ve mentioned them before (how many, etc) –> Ant-Man and The Wasp spoiler free review!

And as he watched that first post credit scene, his hands immediately went to his face, and he gasped “Oh SH*T”!

Ladies and gentlemen, this was a man who played a vital role in this movie. This man knows his Marvel stuff. He is telling you with that image above – GO! WATCH!

Now let’s take a look at the film…

Marvel Studios’ ANT-MAN AND THE WASP opens in theaters everywhere on July 6th!

Blog Posts from #AntManandTheWaspEvent so far: