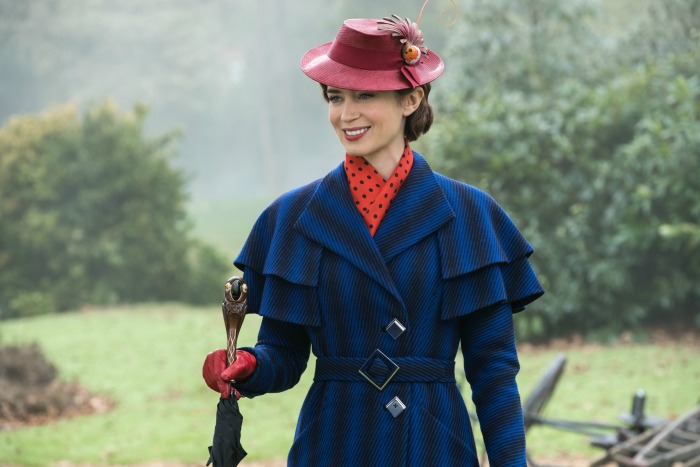 We’ve been waiting for this.

We’ve been needing this. Or her, rather.

Two weeks ago, with my tween in tow, we headed into Dallas for an advance screening of Mary Poppins Returns, a movie that is not a remake in the least, but in fact a sequel, one of many additional stories left by P.L. Travers.

Taking my daughter was critical to my Mary Poppins Returns review. Why? Though she certainly has tried over the years at my direction, this child never could sit through the entire original movie.

I knew that going into it she wasn’t a Mary Poppins superfan, so I looked forward to her unbiased reaction.

Is Mary Poppins Returns Practically Perfect or Not?

In Disney’s MARY POPPINS RETURNS, an all-new original musical and sequel, Mary Poppins is back to help the next generation of the Banks family find the joy and wonder missing in their lives following a personal loss.

Emily Blunt stars as the practically-perfect nanny with unique magical skills who can turn any ordinary task into an unforgettable, fantastic adventure and Lin-Manuel Miranda plays her friend Jack, an optimistic street lamplighter who helps bring light—and life—to the streets of London.

The opening scene was exactly what I expected, with a Lin-Manuel Miranda belting out a new catchy tune, (Underneath the) Lovely London Sky, while riding through the streets of London in an era gone by.

The adventurer in me adored the recognizable landmarks like Tower Bridge and I happily followed along through town and right up to 17 Cherry Tree Lane. Arriving at this familiar place felt like it hadn’t really been all that long ago that we met. Ah, but time has gone by.

The setting for Mary Poppins Returns is London during “The Great Slump” – aka Depression era, and we meet the Banks children Michael and Jane as grown ups. They are the adults now, left with some serious hardships of their own. 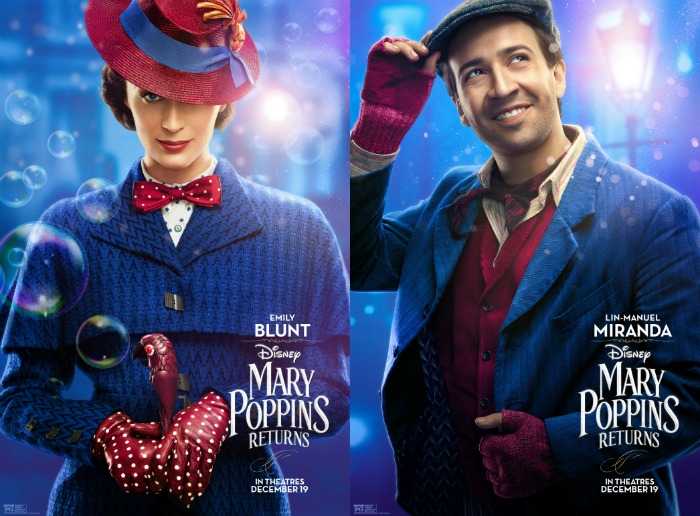 Do Blunt and Miranda Live Up to the Hype?

With Emily Blunt and Lin-Manuel Miranda cast in the lead roles, the excitement was real.

While Blunt was unabashedly the star of the show, Miranda is a fan favorite, one we have grown to adore over the years. He’s a household name, having recognition from Hamilton, Moana, Duck Tales, and even the upcoming live-action Disney movie involving our favorite mermaid.

He’s a quadruple threat in Mary Poppins Returns, with acting, singing, dancing, and I dare say rapping. Yes! His presence as a “leerie” or lamplighter is a great addition to the film.

As for Mary Poppins. It must have been difficult agreeing to take over a role from the uber talented Julie Andrews, but we are so glad Emily Blunt took that chance.

Blunt is Mary Poppins through and through.

There is a reason she already has a Golden Globe nomination before the movie even opens – Golden Globe Award for Best Actress – Motion Picture – Musical or Comedy! Her take on Mary Poppins is “bloody brilliant” – I couldn’t help but throw in a little London speak in there.

In fact, Mary Poppins Returns has four Golden Globe nominations all-together, including one for Best Picture – Musical or Comedy. 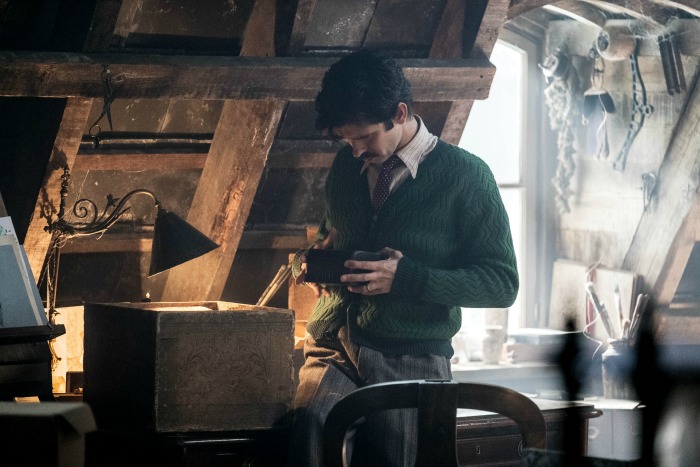 It’s not just Banks and Miranda who bring this film to life though. The youngest Banks children are wise and simply adorable, though definitely in need of guidance and help from a woman who knows how to make an entrance.

I couldn’t help but being impressed by their independence, having lost their mother not all that long ago. Seriously, I lost my mom in my 30s and I definitely didn’t handle it as well as these three children. Quotes like “That’s what mother would do” made my heart hurt just a little.

Perhaps Ben Whishaw, as Michael Banks, stole my heart the most. One scene pictured above really hit home as Michael struggles with one hardship after another. He sings to his late wife in a beloved melody, A Conversation. Heartbreaking.

Though there are themes of grief, hardship (this is the Great Depression era after all), and more, Mary Poppins Returns is joyful, magical, and yes, practically perfect in every way (except maybe for the 2 hours and 10 minutes length for some young kids – so go to the restroom before). 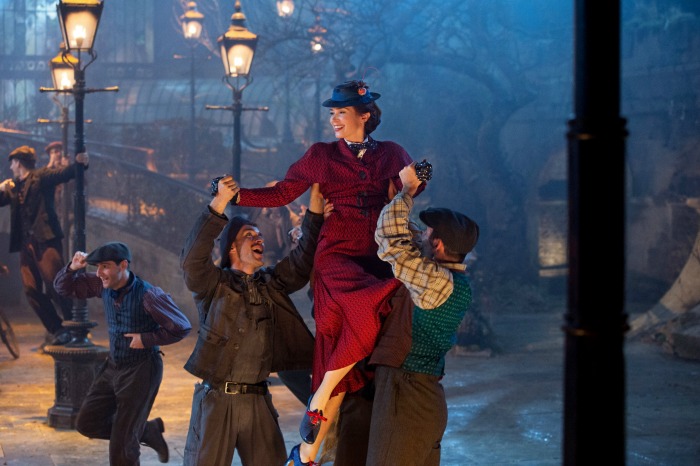 The Magic of the Music

The storyline is wonderful, but it’s the music which really shines.

I already have my copy of the soundtrack!

For those of you who love a bit of Disney trivia knowledge, Richard Sherman was a musical consultant on the film! Not sure who Richard Sherman is? He is a Disney legend who wrote the songs for Mary Poppins and so many others you know. I had the chance to see him in person at Disneyland one year when It’s a Small World celebrated 50 years (yes, wrote that song too)! In fact, if you have never seen the movie Saving Mr. Banks, where Tom Hanks plays Walt Disney and Emma Thomson plays PL Travers, you need to! It’s all about how Mary Poppins came to be (Richard Sherman was there) and to this day is one of the few people allowed to play on the piano in Walt Disney’s office. 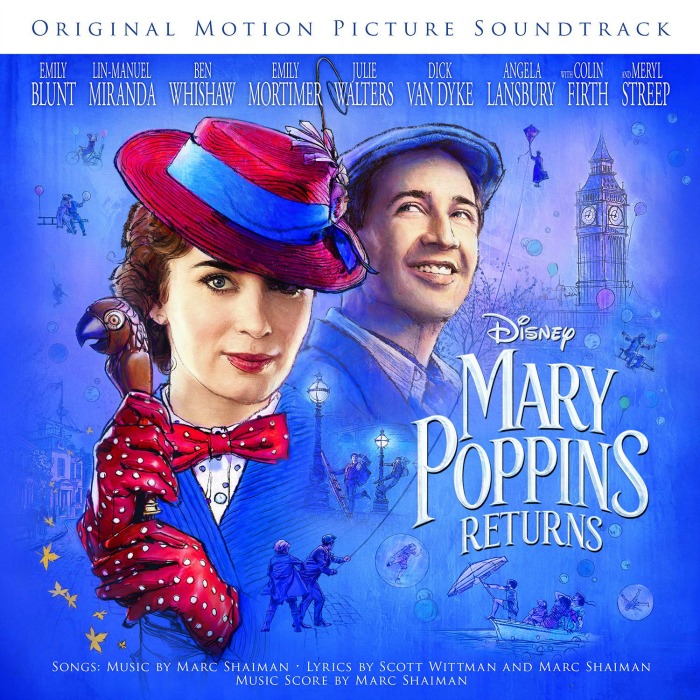 The soundtrack is available NOW and there are songs which you will be dying to hear again and again, like “Trip a Little Light Fantastic” and my personal favorite, Emily Blunt singing to the children, “The Place Where Lost Things Go”.

It’s a moment where Blunt as Poppins becomes cemented in history. 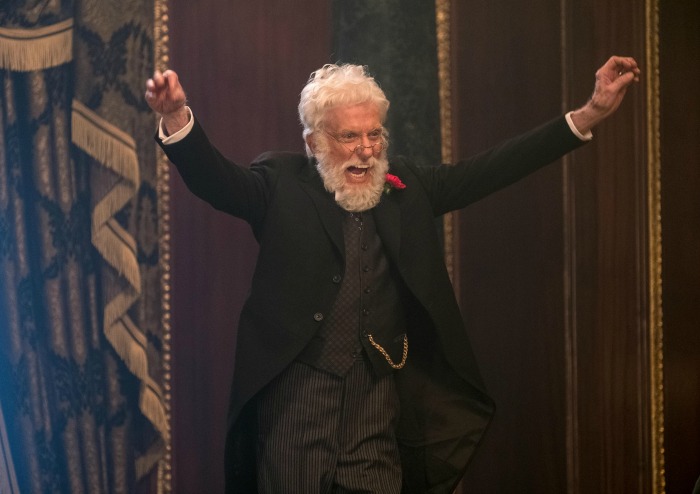 Angela Lansbury appears as the Balloon Lady in the final scene, a treasured character from the PL Travers books and Dick Van Dyke is Mr. Dawes, Jr., the retired chairman of the bank now run by Colin Firth’s character.

It was pure delight to watch these two on the big screen! 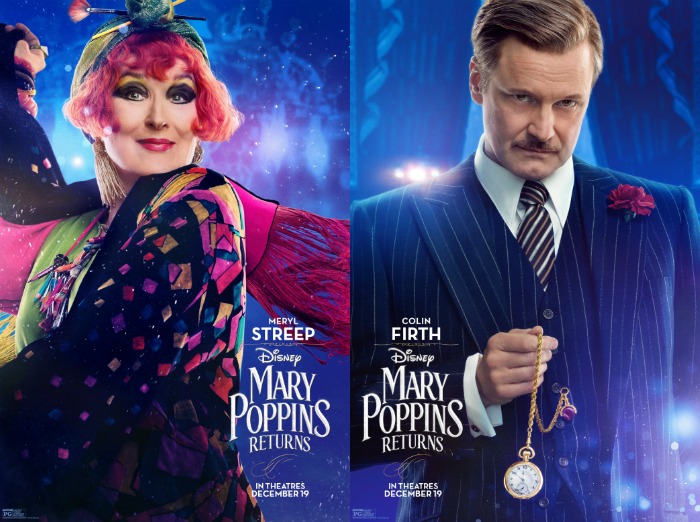 There is one scene which could scare the youngest of children, one which takes place in a magical Mary Poppins world. It’s the animated scene where some bad guys are up to no good. It doesn’t last long, and in Mary Poppins style, you know it will all end well.

Right before that is a song/dance number featuring Mary Poppins and her friend Jack. The show doesn’t really fit in my humble opinion, though who doesn’t love a good Lin-Manuel Miranda rap? They sing “A Cover is Not the Book” together and it totally went over my head (and that of my daughter’s), but the words of the song are describing some unseemly characters, tongue in cheek style. It’s not the best, but like I said, I didn’t really notice that detail until it was pointed out to me and I read the lyrics.

Speaking of my daughter. What did she think of Mary Poppins Returns? 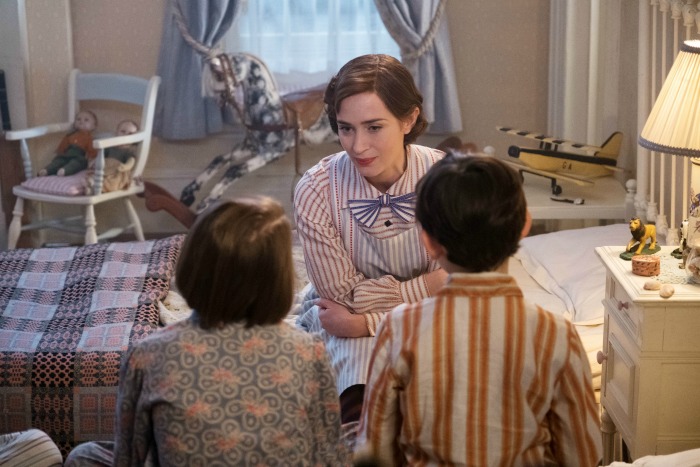 Much to my surprise, she says it’s nothing short of supercalifragilisticexpialidocious!

She was humming the tunes these last few weeks and cannot, I repeat, cannot wait to see it again this week! WOW!

That says a lot about Emily Blunt’s performance right there. To Emily I say, you are not in the shadow of anyone, you are Mary Poppins. And just like Julie Andrews, you might be walking home with an Oscar for Best Actress! 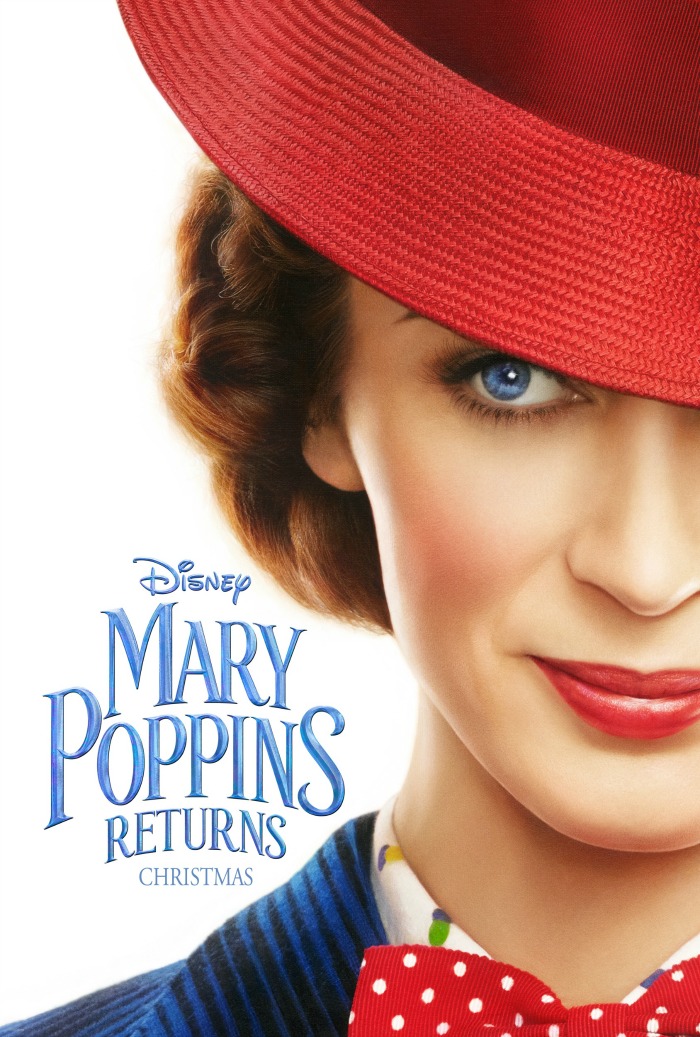