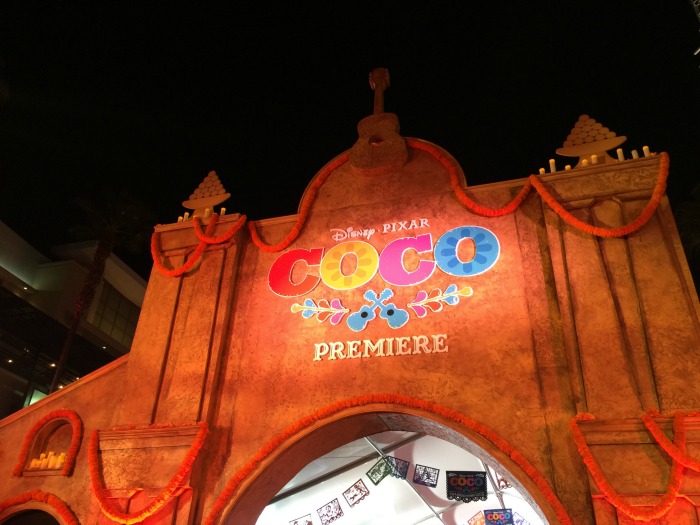 This past week was one of those weeks that I’ll be talking about for years. In fact, I can envision myself sitting in my house decades from now, surrounded by half a dozen grandkids (no pressure, kiddo), recalling the time I walked the red carpet at Disney*Pixar’s Hollywood COCO premiere.

Though it’s not the first time I’ve experienced the thrill of it all, let me tell you it never gets old. Never.

Disney invited me to California on an all-expenses paid trip, in exchange for my coverage of events, and today is the first of many posts detailing our adventures, from the red carpet COCO premiere to interviews with the cast and more. Be sure to stop by daily for new posts and scoop about what will be Disney*Pixar’s next hit! Yes, I’ve seen the movie!–> My No-Spoiler COCO Movie Review 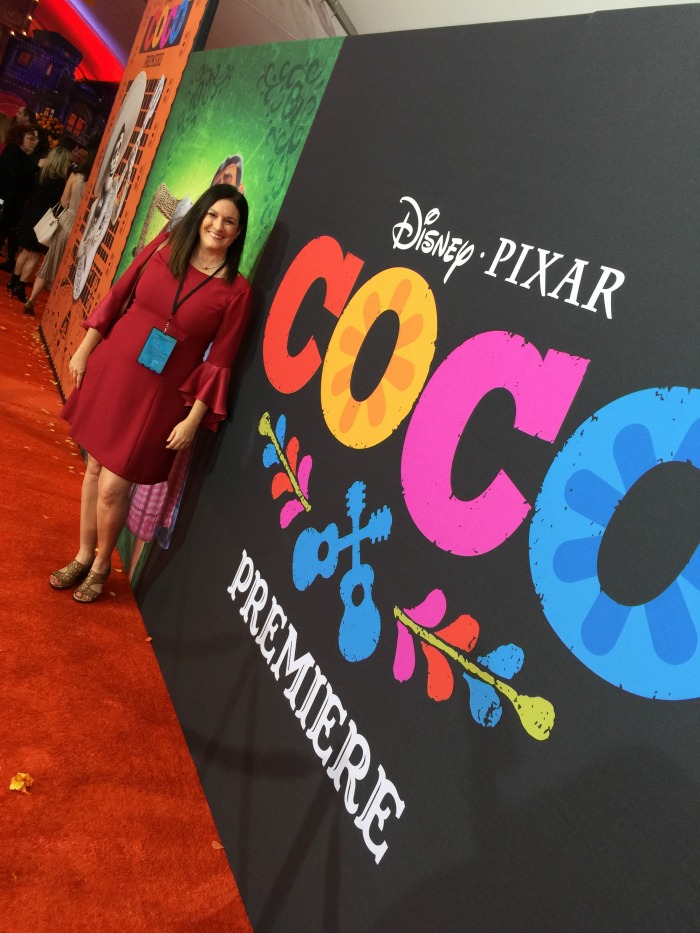 When you take a group of 25 bloggers to the red carpet, you can imagine the scene.

Dress. Shoes. Small handbag. Camera ready for anything and EVERYONE who might walk by.

But let’s be real for a minute, even those of us who have done this before walk into a premiere with our eyes wide open, staring in disbelief that somehow, with a lot of hard work, we landed in this magical place.

The smiles you see on my face. All real. You won’t be surprised to discover that the smiles lasted all night (until I cried…COCO is one of those films that will leave a mark in your heart and mascara on your face, in a good way – bring tissues).

This movie premiere, the COCO premiere, felt differently than those I’d attended before. Let me walk you through it so you can see for yourself.

We arrived promptly at 5:30pm, but because of Daylight Savings, the skies were already darkened, lending itself for a more exciting event.

Like so many others, the COCO premiere would be held at the famous El Capital Theatre in Hollywood, just steps away from the golden stars that line Hollywood Blvd. The street is closed down for these one of a kind events, providing greater security, and even better views for locals and tourists staying in the area.

Due to the darkness, a large tent was set up with incredible lighting, and I immediately saw what is known as papel picado. While they might look like banners or flags at first glance, papel picado is actually considered a Mexican folk art. They are made of paper (sometimes tissue paper) and display intricate designs created by a small chisel or sharp scissors.

The second thing I saw was the carpet!

Those of you who read my announcement that I was attending, know that I predicted it would be orange. Why? Take a look at this image from the movie…

Now you understand why orange was the perfect choice!

A bridge made of marigolds carpeting the floor is what takes Miguel across and into the Land of the Dead.

The marigold carpet is breathtaking in the film, and it made me smile under my Hollywood feet. 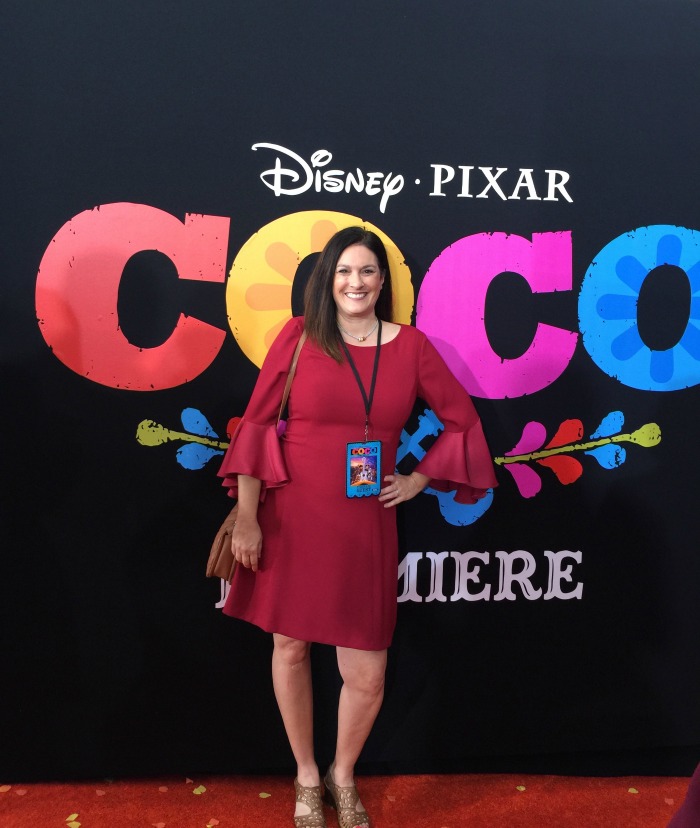 With every red carpet premiere, I have tried to find the perfect dress.

By the time I went shopping, my husband and daughter surprised me with a gift, a stunning silver necklace with red, yellow, and pink charms. This was a gift for the COCO premiere. So much thought went into it…they are keepers! Any dress I found would have to match the necklace.

I immediately fell in love with this above the knee dress, one with on-trend bell sleeves.

One of the perks of being on the red carpet is watching the arrivals.

When the cast arrives, the crowd goes wild (and so does the paparazzi)! Photos are taken followed by interviews with so many different outlets.

From Benjamin Bratt to legendary Edward James Olmos, and newcomer Anthony  Gonzalez (who plays Miguel) to the man in every single PIXAR movie (John Ratzenberger), they each exuded joy.

You could tell they were not only having the time of their lives, but they were incredibly proud to be part of a film that will touch so many. 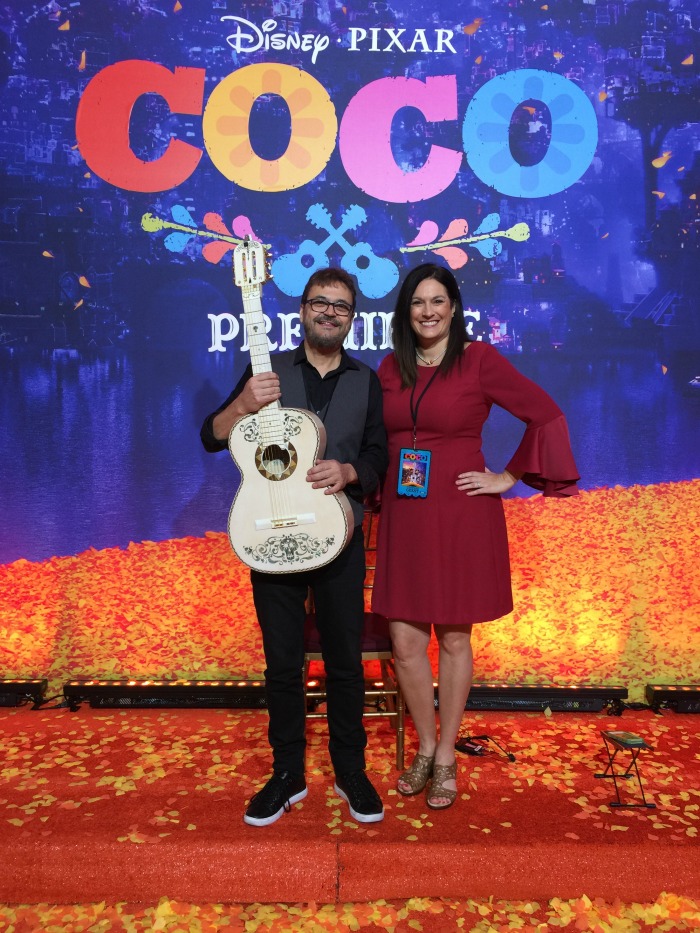 Once we had gotten all our “red carpet” photos, we walked further into the tent and headed directly into the pre-party for what would be an hour of celebration before being ushered into the theater.

Paper marigold petals were at our feet, this premiere was so festive.

We first met Guitarist Federico Ramos, who literally was holding the guitar designed for the movie – with gold and mother of pearl, the intricate design was simply beautiful. 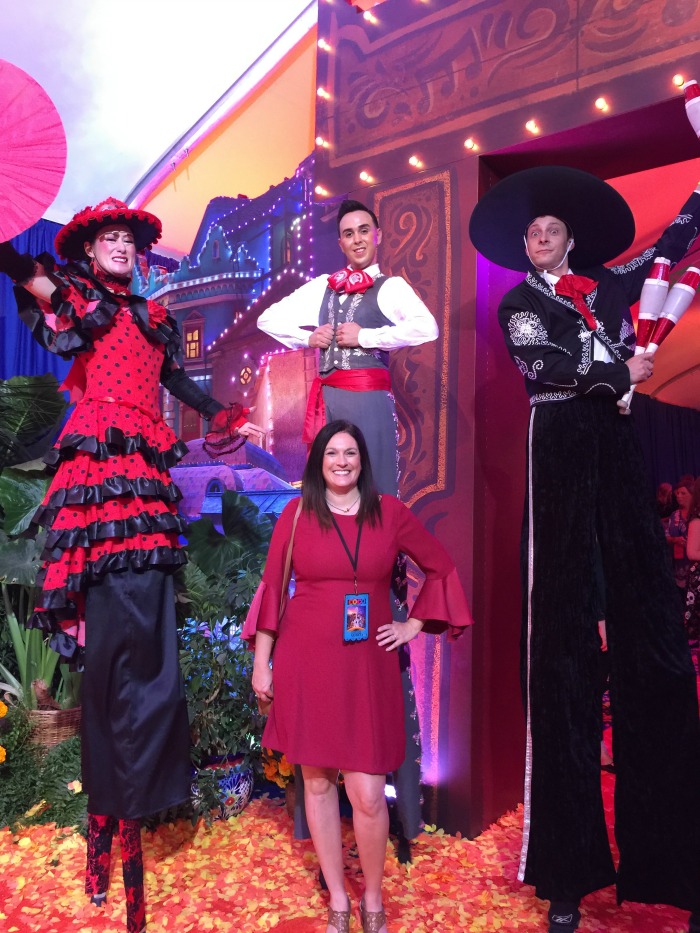 Music from the movie filled the air.

Sponsors like Nestle and Southwest Airlines had fun areas with photo opportunities. Children (and hey, adults too) could get COCO themed temporary tattoos, create crafts, or even make a necklace with a COCO guitar pick as the pendant. That is one souvenir I adore from this trip.

It’s only here, at a movie premiere pre-party, where you find yourselves literally rubbing elbows with some of the hottest stars around.

While I could show you the perfect poses from the official red carpet premiere pictures, I’d rather show you these candid shots, caught as I literally was walking by them. 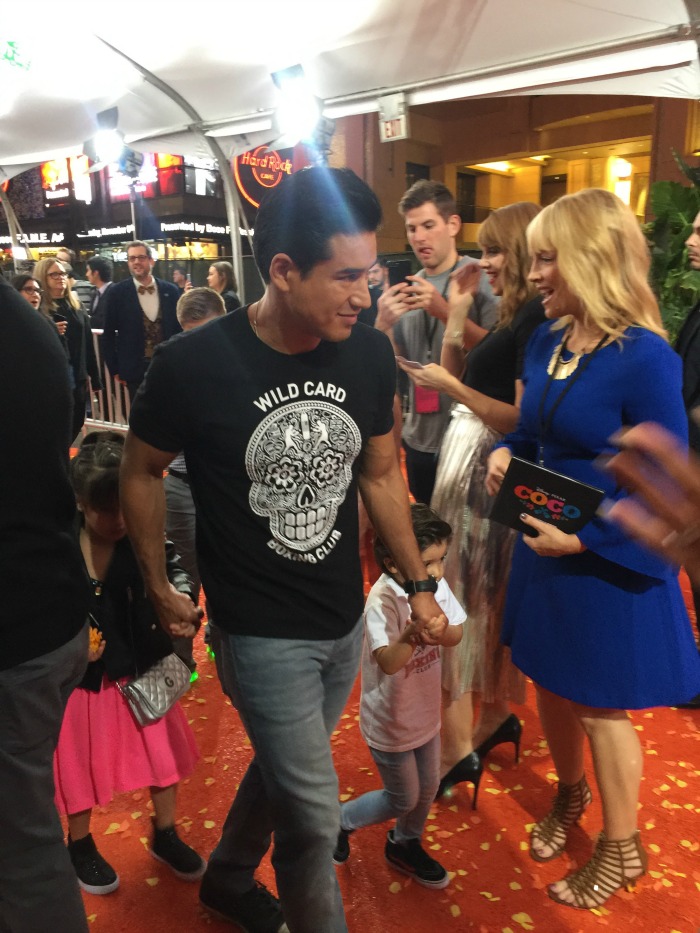 Mario Lopez and his children (Television Host; Saved By The Bell – a fave) 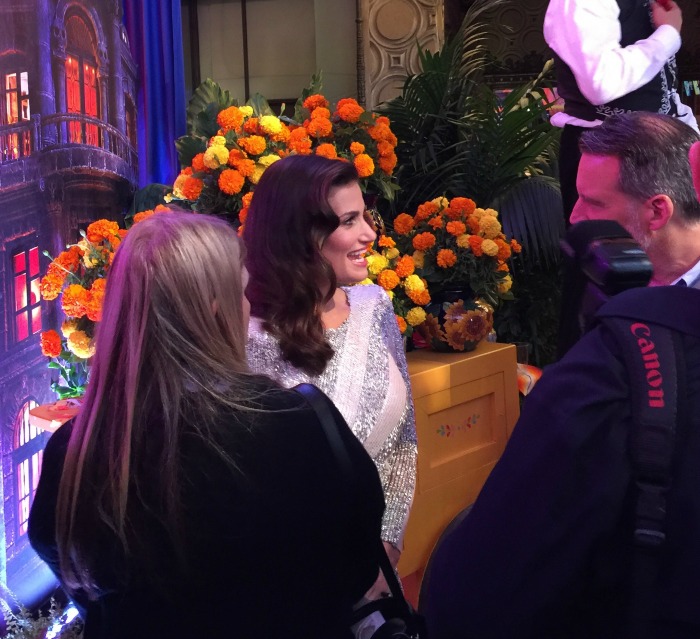 I was thrilled to see Queen Elsa herself, the incredibly talented Idina Menzel.

Not only was this is a big night for COCO, but it was a big night for FROZEN fans everywhere, as OLAF’S FROZEN ADVENTURE is a 21 minute short feature which plays right before COCO for a limited time, and features 4 new songs. Yes, Idina Menzel is back singing her heart out (and so is the rest of the cast). 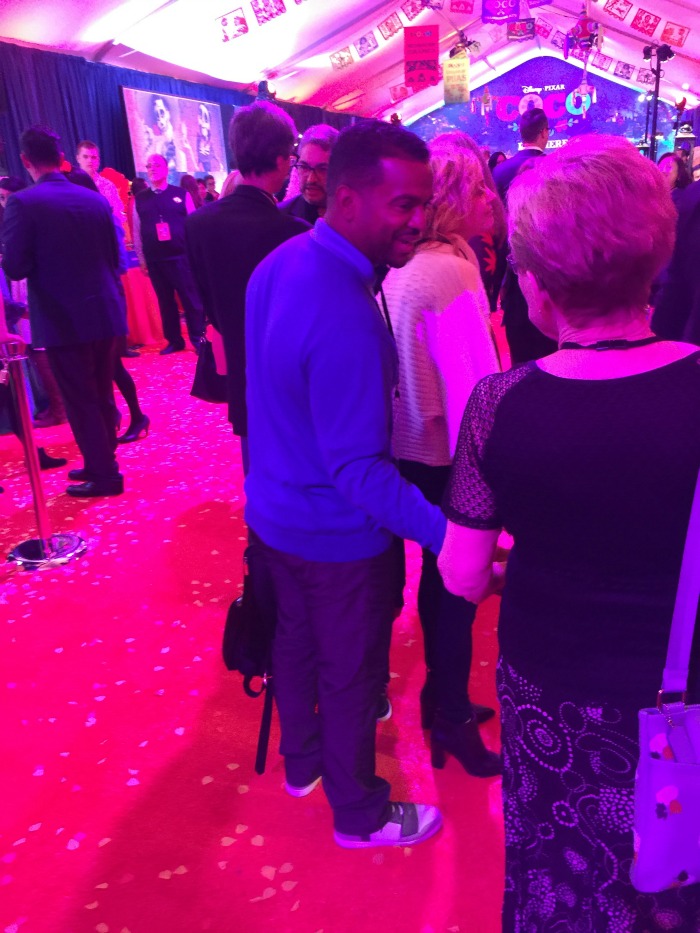 Alfonso Ribeiro (Dancing With The Stars Champion; Carlton from The Fresh Prince of Bel-Air) 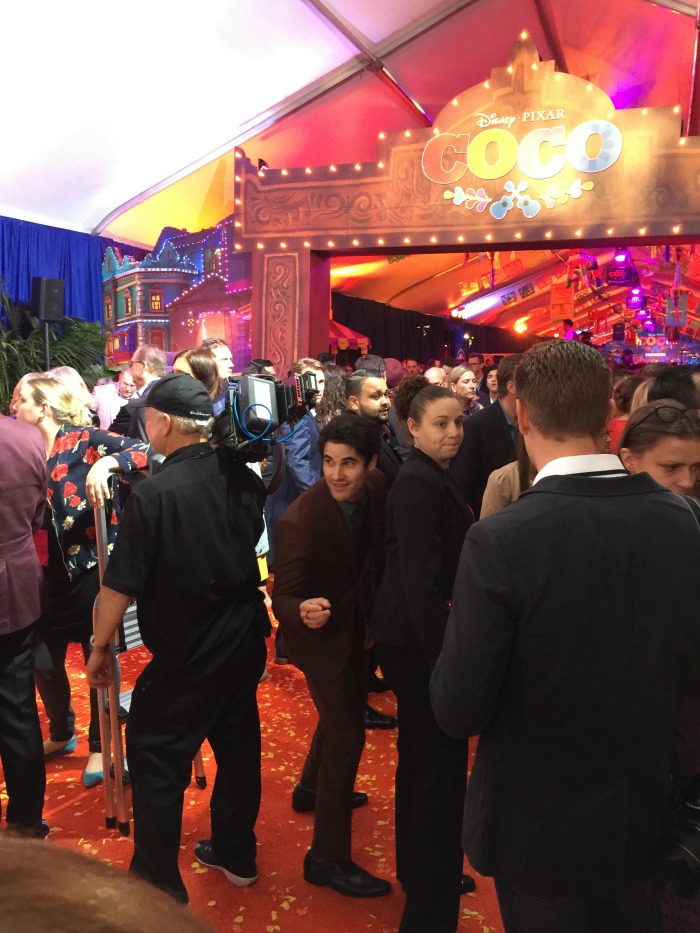 I had the chance to see so many more including a very busy Jordan Fisher, who was chatting on his cellphone while looking for someone at the party. I think he might have been looking for Dancing With The Stars friends and alum, as there were many in attendance, like Alfonso Ribeiro and even Gleb Savchenko. Jordan Fisher is so talented (Hamilton, Moana, and singing the new castle song at Walt Disney World, “Happily Ever After”) that I believe one day he will become a Disney Legend officially, though he already is well on his way in my book. I still can’t believe I danced with Jordan Fisher on a Disney trip! 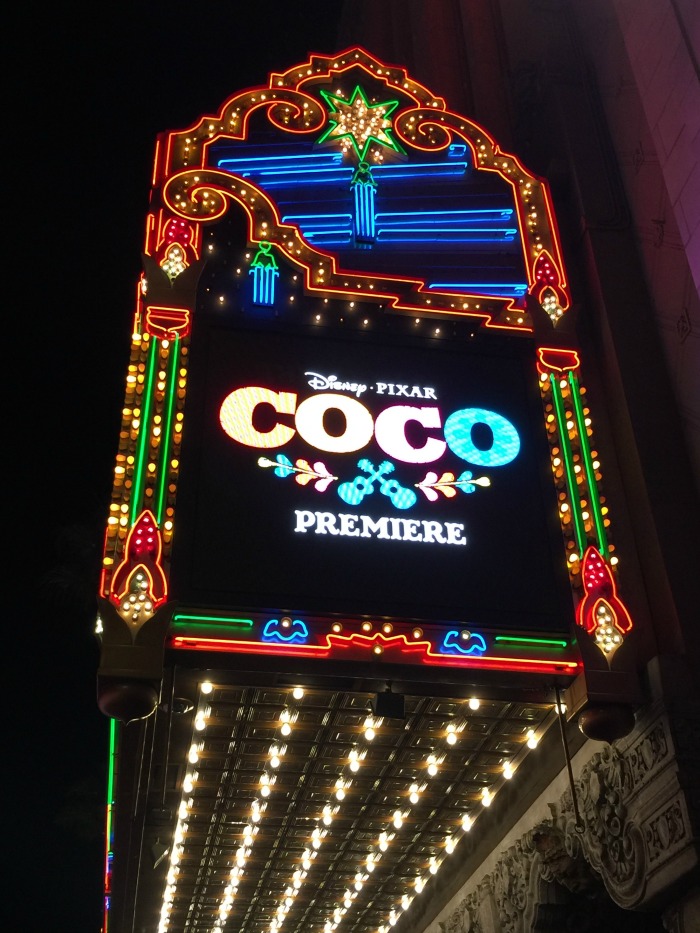 Soon it was time to put away the cellphones and head inside the El Capitan Theatre. Our group of Disney bloggers sat in the first two rows in the middle section. It couldn’t have been better. From this vantage point, I could see that we were just steps away from the cast of COCO.

There is something incredibly energizing about watching a movie with those who have devoted so much to a film. You see them smile. You hear them laugh. You watch people afterwards as they congratulate everyone on the film. It’s really a unique experience and I recall witnessing a husband gushing over his wife on the big screen, not believing his eyes.

Actor Herbert Siguenza and family sat in the same row as I did. Benjamin Bratt, he was 4 rows directly behind me.

No matter who you were in that packed theater, we were all wondering about this film, COCO. Would it pass the test? Would there be laughs and tears?

Read my No-Spoiler COCO Movie Review, which answers the questions and also addresses any concerns parents might have.