There’s something incredibly exciting about going behind the scenes of a television show. And when you get the chance to sneak a few peeks inside the workings of ABC’s hit Tuesday night comedy and meet one of your favorite TV moms of all time, even better. Yes, I visited the actual television set where the cast of THE MIDDLE was filming and had the chance to meet and spend time with them. Follow along on my journey as I take you with me.

For those of you who are tv junkies like me, be sure to also check out my set visit and meeting the cast of Station 19.

Nnote: Disney and ABC invited me to Los Angeles on an all-expenses paid trip, in exchange for my coverage of these events, which included a visit to the set with the cast of THE MIDDLE. As always, all opinions are my own. Affiliate link in post where a small commission may be earned at no cost to you for any purchases made.

Meeting the Cast of The Middle and Set Visit 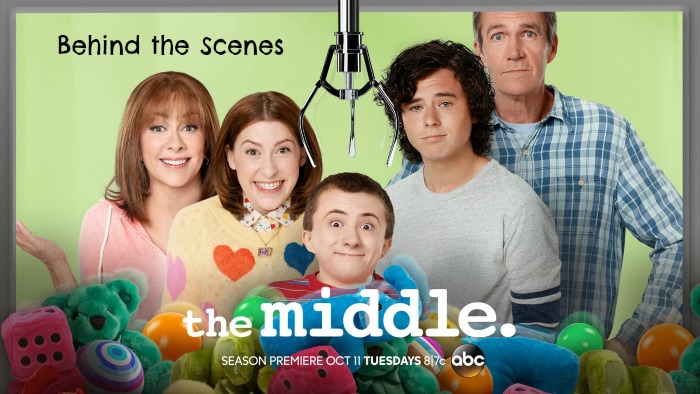 Let me take you along as myself and several bloggers got the experience of a lifetime – meeting the cast of THE MIDDLE!

THE MIDDLE, starring two-time Emmy winner Patricia Heaton in this warm and witty single camera comedy about raising a family and lowering your expectations.

Middle-aged, middle class and living in the middle of the country in Orson, Indiana, Frankie Heck is a harried wife and mother of three who uses her wry wit and sense of humor to get her family through each day intact. Frankie works as a dental assistant, and her unflappable husband, Mike, is manager at the local quarry and her sardonic partner in the daily grind that is raising their average yes, most definitely average family. 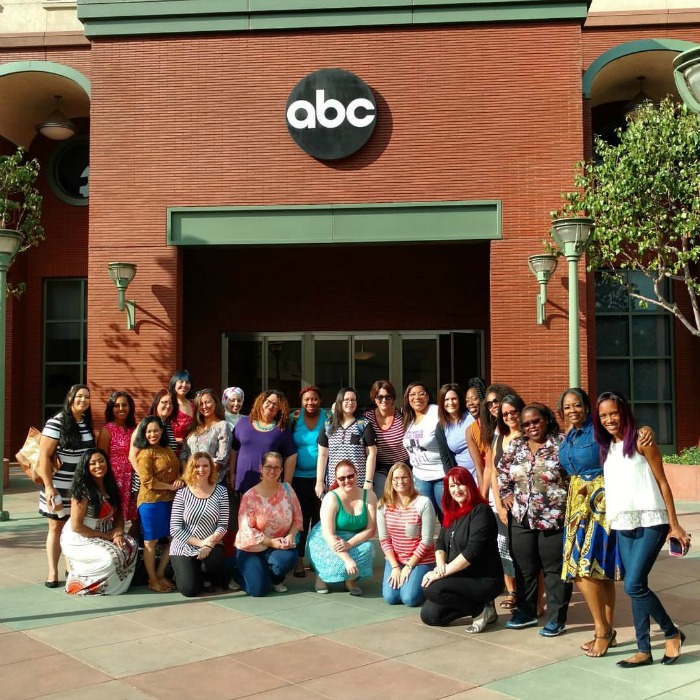 It was a whirlwind few days that I spent with an amazing group of bloggers.

Red carpet, celebrity interviews and more, but a big part of our itinerary had to do with the huge ABC Tuesday night fall lineup. Now I don’t know about you, but I always look forward to fall because of new and returning television series. Summer is over and it’s the time to get serious about old favorites and find new ones too! Oh, and and you will, I promise! More on that soon.

THE MIDDLE Behind the Scenes

Visiting a closed television set is unlike any other experience. Usually your pre-conceived notions and ideas of what a set might be like and reality are nowhere close. It’s not necessarily glamorous, but what an experience. 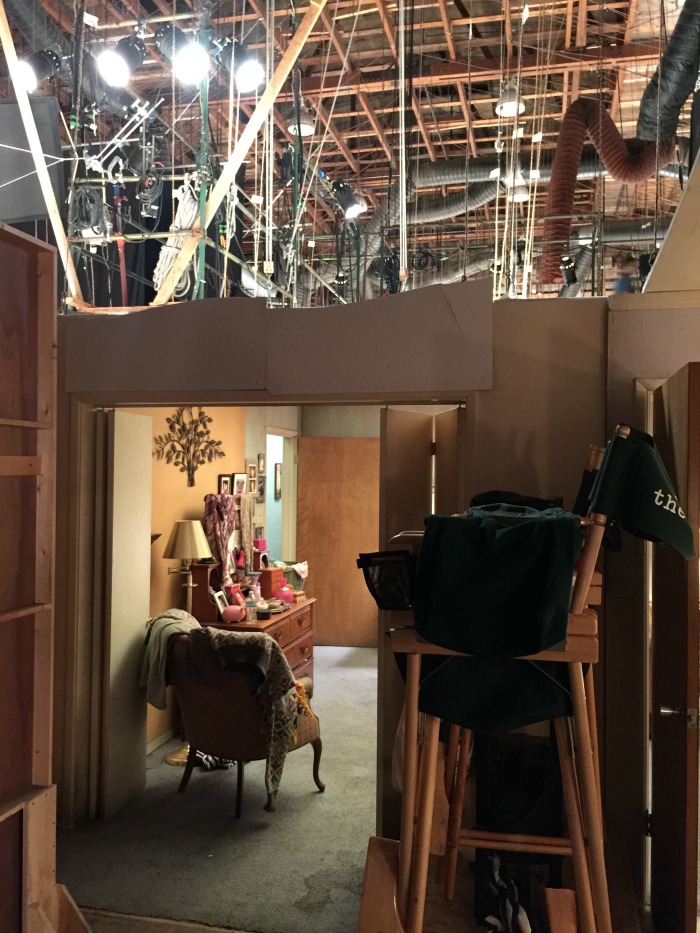 We had the chance to walk through the set, although very quickly as they were actually filming that day.

Is THE MIDDLE Filmed in a Real House? No.

As you can see above, this is a working set. I wanted to give you a glimpse of what you don’t see on camera…all the inner workings and cameras. These are tight spaces as The Middle is not shot before a live audience. You’ll notice all the cords, lighting, and tools of the trade above each room. The overall set was dark and you had to really watch where you were walking.

FUN FACT: They go old school on THE MIDDLE set here and use a single camera to get a certain look. That is much different than how most television shows you see today are filmed.

All primary characters were on set and huddled off in their chairs going over scenes with their scripts.

I’ll admit it was a sight to see seasoned actress Patricia Heaton over in the corner chair, likely going over her lines. She was all business, not even looking up to see the mob of bloggers headed her way. Atticus Shaffer, who plays younger son Brick, was quite the gentleman and quickly came over to shake every single one of our hands…all 25 of us! He was incredibly nice and seemed really excited that we were there on THE MIDDLE set that day. 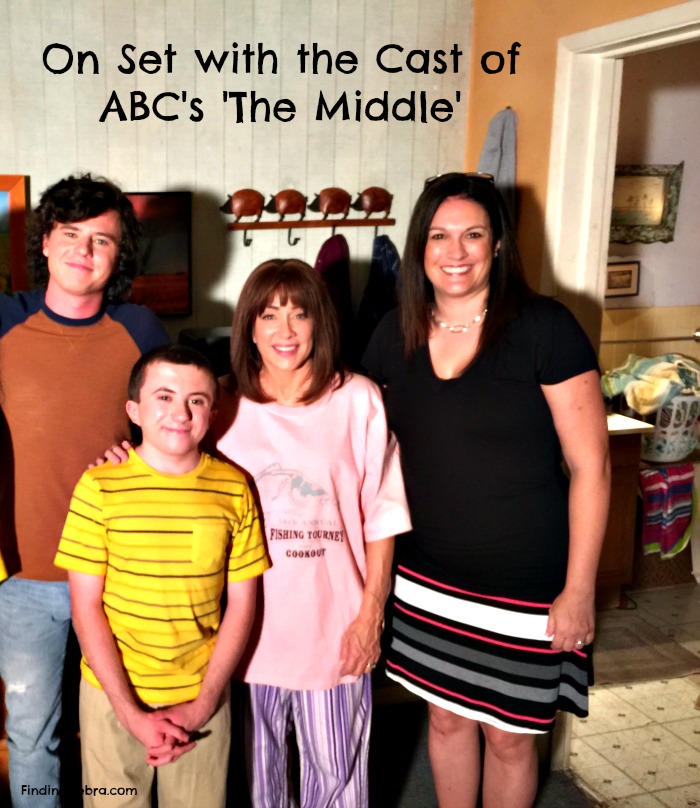 We were able to meet the entire cast except for Eden Sher, who plays Sue. We all had a quick meet and greet with stars Patricia Heaton as Frankie, Neil Flynn as Mike, Charlie McDermott as Axl, and Atticus Shaffer as Brick. Neil Flynn was in the middle of a wardrobe change while I was doing the meet and greet – pajamas all around for the scenes of the day.

The highlight of the day for me was meeting actress Patricia Heaton. Though highly successful and funny in THE MIDDLE, as a fellow “Debra” who married into an Italian family, I always related to her in the role of Debra Barone in “Everybody Loves Raymond”.

What set visit wouldn’t be complete without a chance to sit in the family room?

Costuming and Wardrobe for the Cast of THE MIDDLE 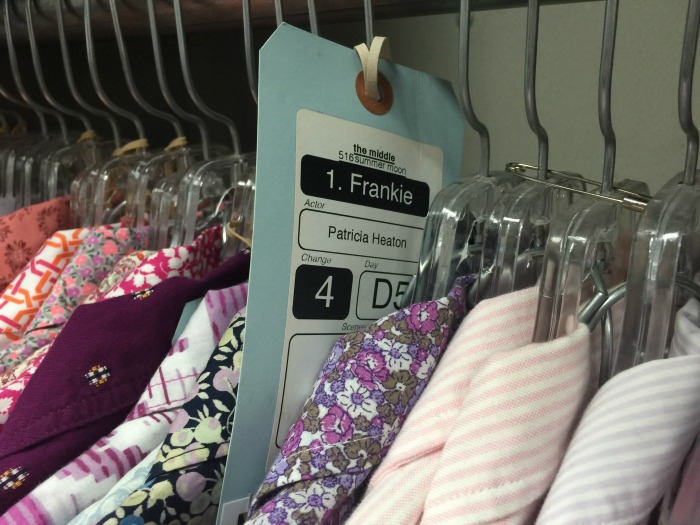 Speaking of wardrobe changes, we had a chance to tour WARDROBE!

This was a dream. Now, not in terms of the clothing styles, as I don’t exactly have the same taste as “Frankie”…BUT, the choices. And oh the colors! 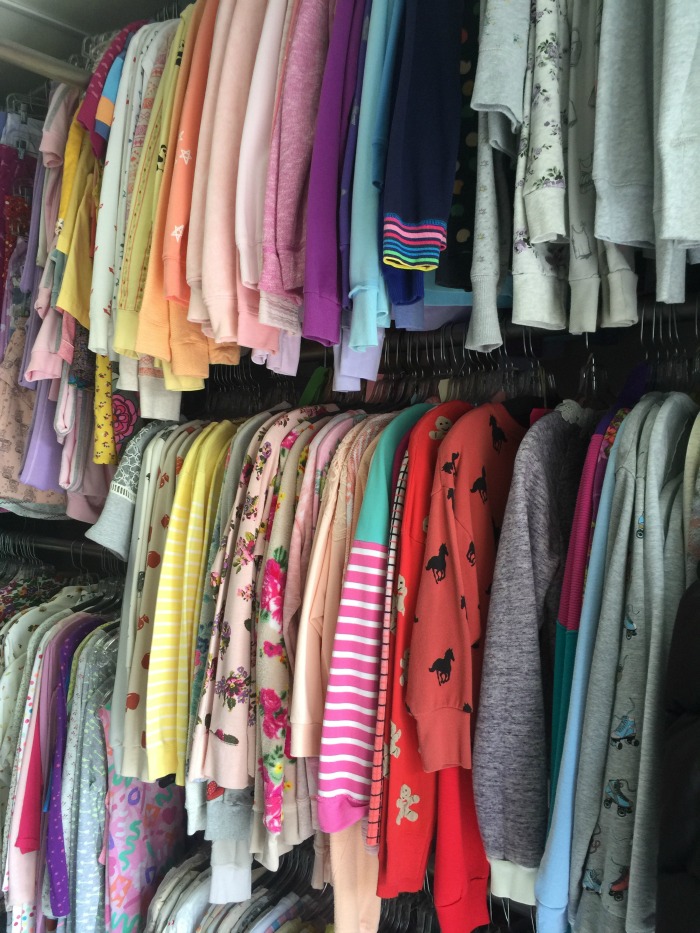 There were rows and rows of clothing options in the trailer which was located just outside the set on the asphalt. 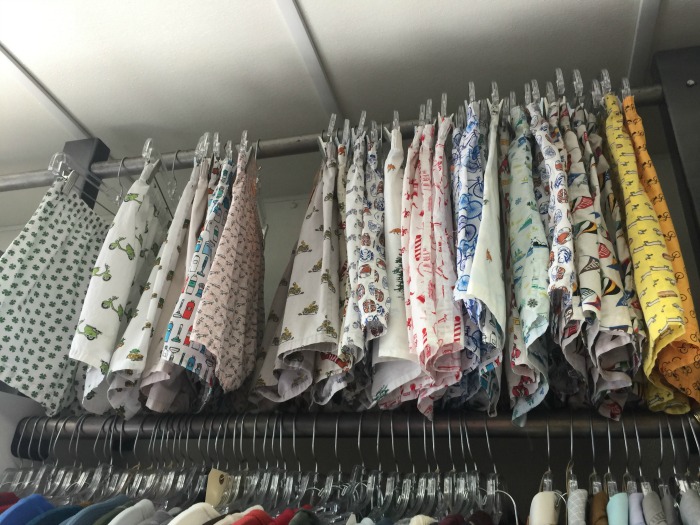 I couldn’t help myself but take a photo of the boxers. LOL

This year, the kids will find themselves breaking out of their comfort zones and navigating new situations than what they’re used to which may or may not be very comforting to Frankie and Mike.

In tonight’s season premiere episode, “The Core Group,” Frankie and Mike are excited to meet April (Greer Grammer), the love of Axl’s life, but discover that love may indeed be blind when April reveals a quirky personality trait. Meanwhile, after getting bit by the acting bug while working at Dollywood over the summer, Sue wants to change her major to theater, and Brick is starting high school and making it his mission to try for a fresh start and not be considered one of the weird kids.

I know a few parents who can relate to them!

See what else I was up to in Hollywood: 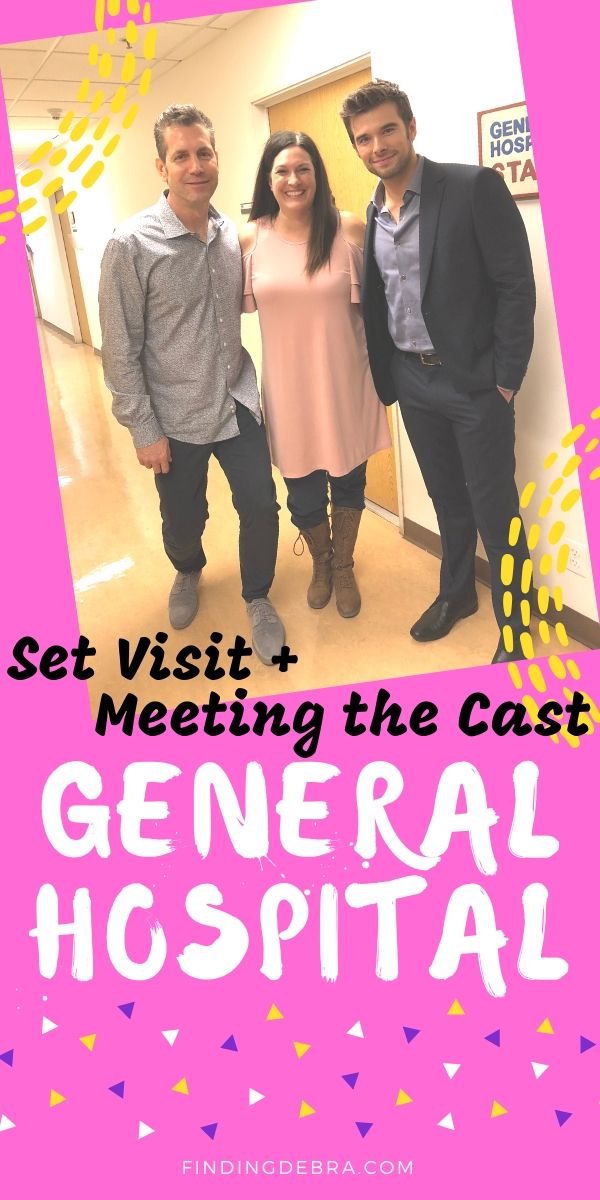 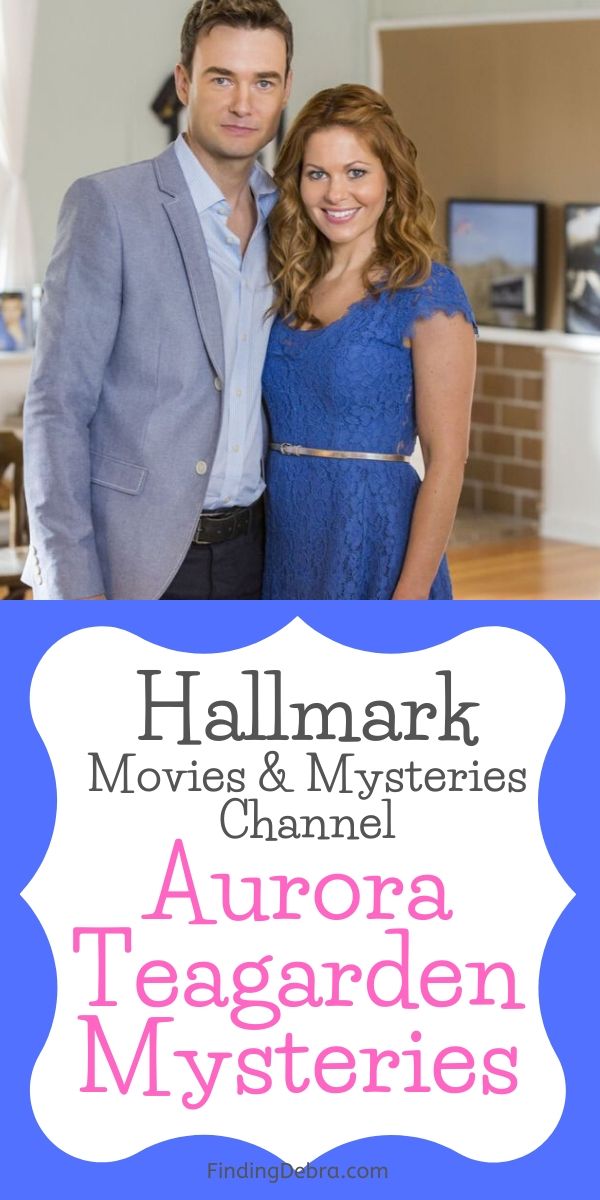 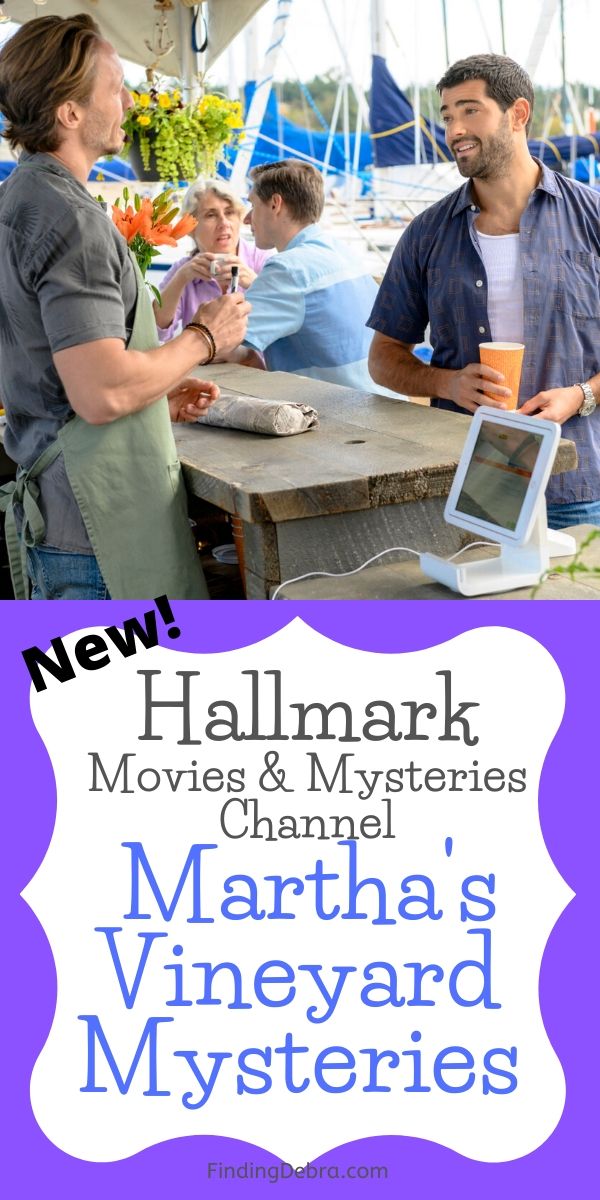