It wasn’t all that long ago that we ventured out to visit The Wizarding World of Harry Potter™ for the very first time. I wish we could have taken every single friend, every single family member with us, but since we couldn’t, we discovered a way to make them feel special. We sent them mail from Owl Post, complete with Hogsmeade™ postmark!

Follow along! I’ll show you exactly how to do this. 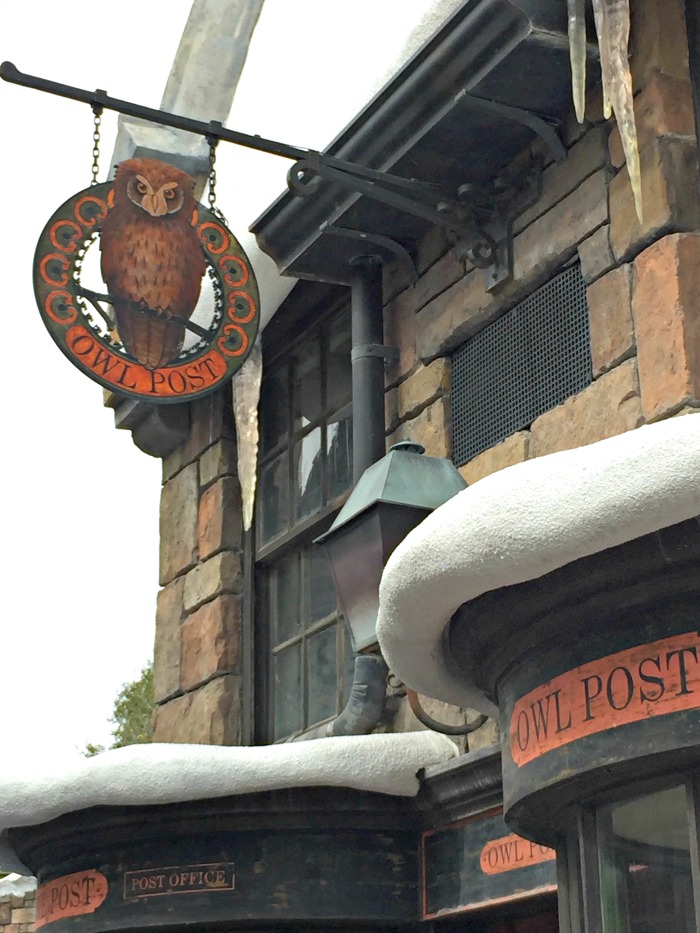 When we talk about The Wizarding World of Harry Potter™, you must know that there are two separate sections, one in each theme park. Know that before you purchase your tickets, something I’ll talk more in detail about later.

To mail letters or postcards from The Wizarding World of Harry Potter™, you will want to head to Hogsmeade™, which is inside Universal’s Islands of Adventure™. 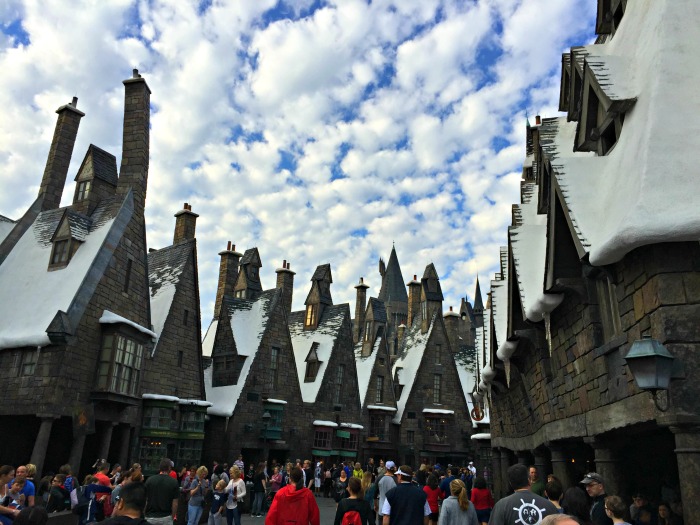 Towards the rear of the theme park is where you will discover the magic of Hogsmeade™.

It is here where you’ll gasp at the charming village nestled at the bottom of Hogwarts™ castle, full of snow-capped buildings.

As you walk through the village, you’ll find Owl Post located next to Ollivanders wand shop in the center of Hogsmeade™. In the image above, Owl Post would be up ahead and on your right.

Owl Post is a quaint little shop where you’ll find an assortment of souvenirs, owl items, and of course writing instruments. You can certainly buy stamps, postcards, and get the Hogsmeade postmark on them inside.

BUT there’s a tip I want to share because the shops can be sometimes so crowded.

Best Spot to Get Hogsmeade™ Postmark 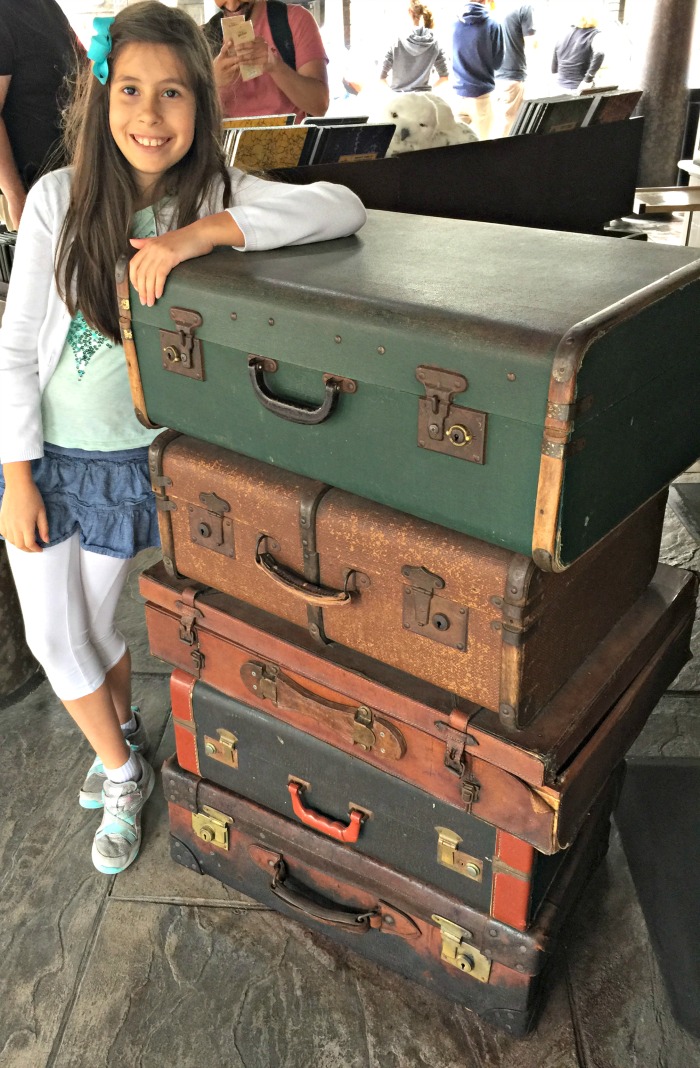 Right next to Owl Post is a snow-covered building which is a favorite for those wanting to take a break from the sun. It’s an open area with shade and a bit of seating.

Head there and you’ll spy a kiosk of sorts with a cashier and this stack of suitcases! 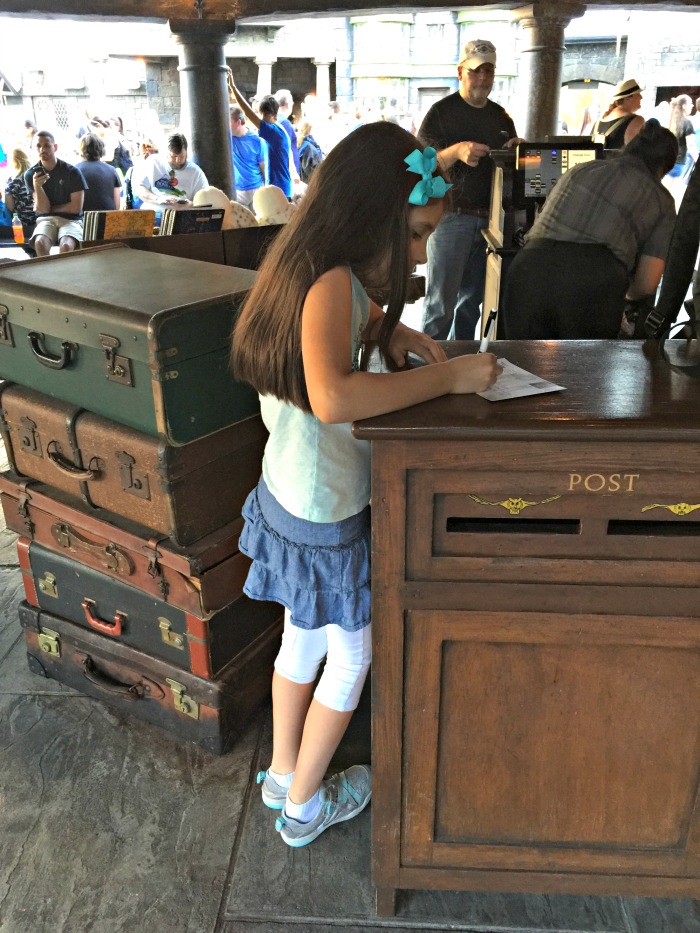 Here at the kiosk you can buy all your supplies (stamps, postcards, stuffed owl, etc.) and mail letters complete with a special Hogsmeade™ postmark.

But before you stop, shop, and write, take a look around. 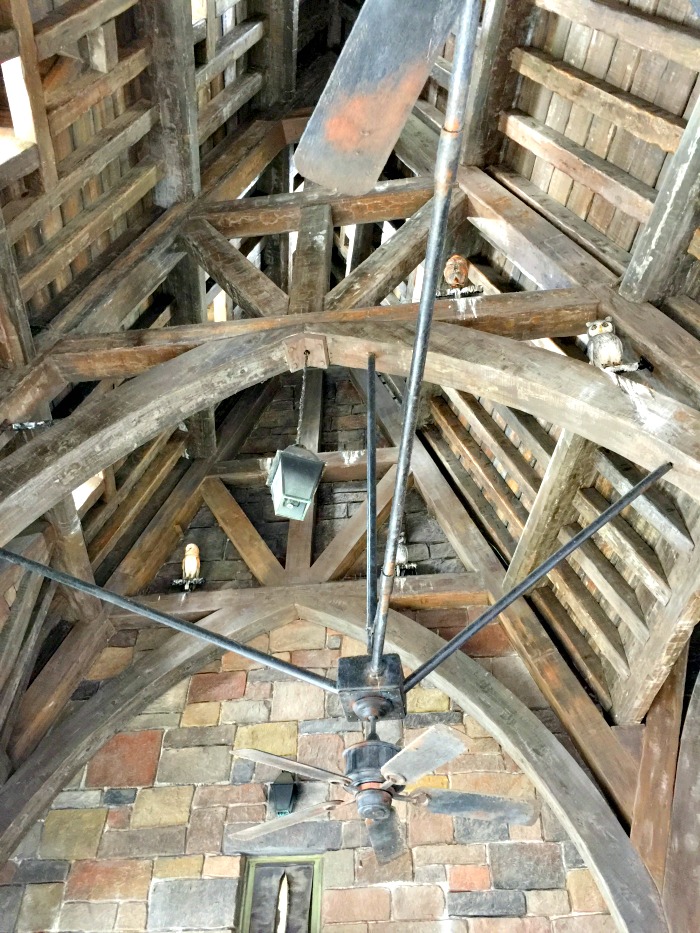 Or maybe I should say look up.

Do you see what I see? 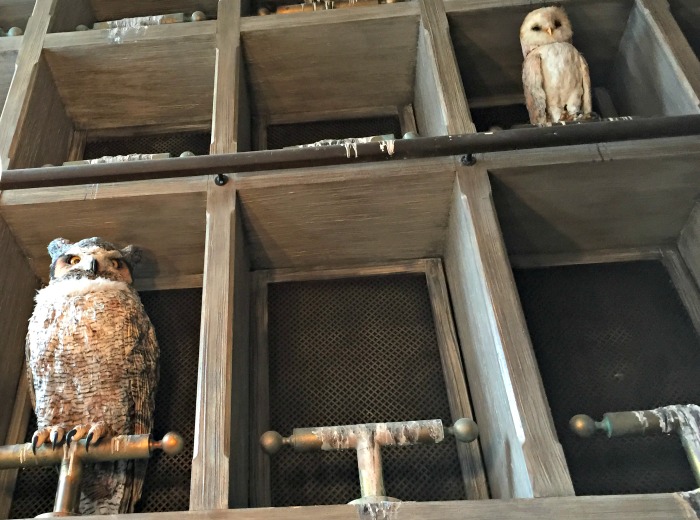 Why Get a Hogsmeade™ Postmark? 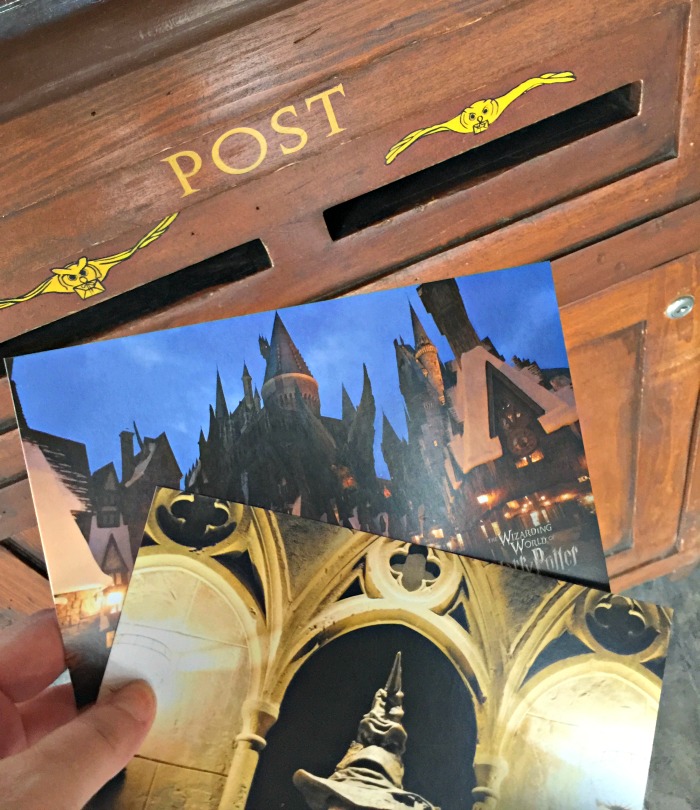 We really wanted to share some Harry Potter™ fun with loved ones around the country. Sending postcards has always traditionally been fun for our family, so we jumped on the bandwagon again in Hogsmeade™.

Truth be told, there was one more reason. Souvenir for us! 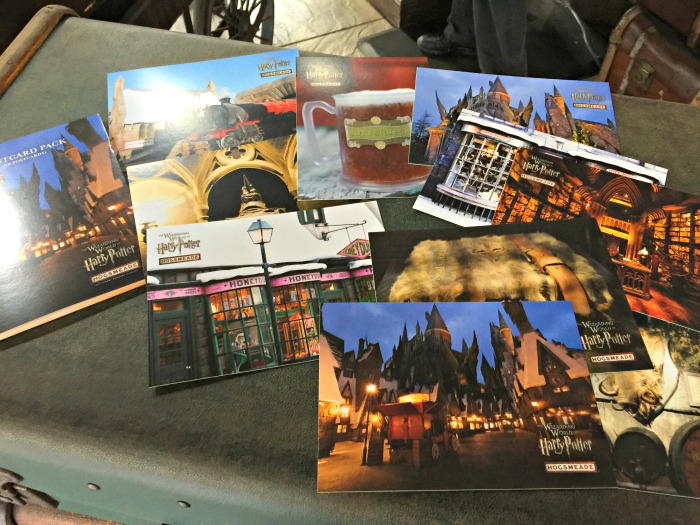 We found 10-packs of postcards available for sale at the kiosk.

We bought the Hogsmeade™ postcard pack because well, we were in Hogsmeade!

While you can certainly buy them here at the kiosk, these same postcards were found in many places throughout The Wizarding World of Harry Potter™ (and likely throughout the theme park as well).

TIP: If you don’t want to purchase postcards in the theme park, bring your own from home. Remember too that you can write a letter and get the Hogsmeade™ postmark on letters.

There is no charge for the postmark. 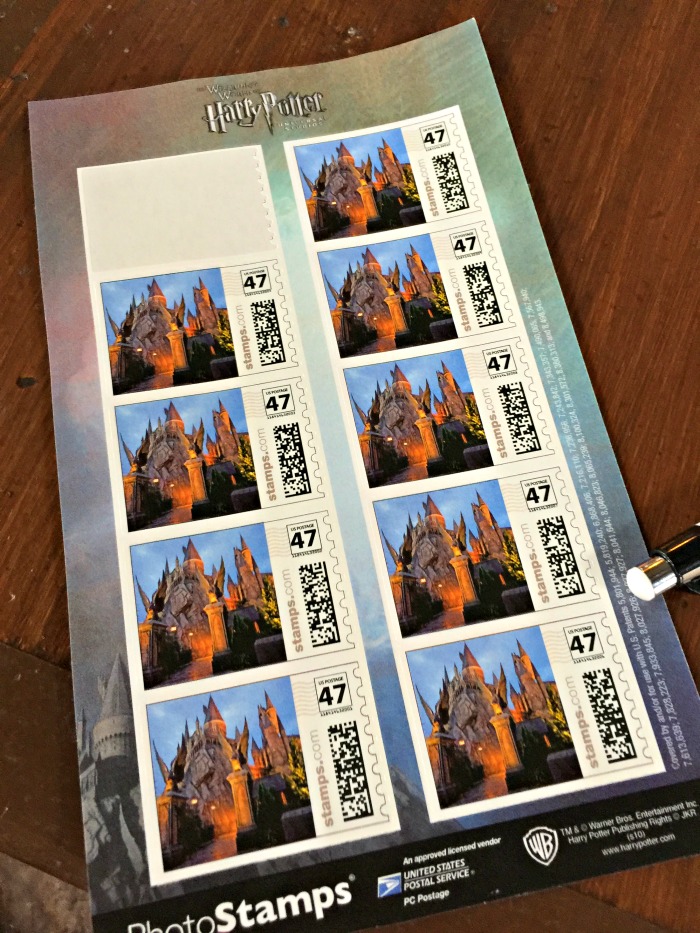 USPS stamps are available for purchase as well, but you can certainly use your own stamps from home.

We happened to just love keeping with the Harry Potter™ theme and bought these at the kiosk. 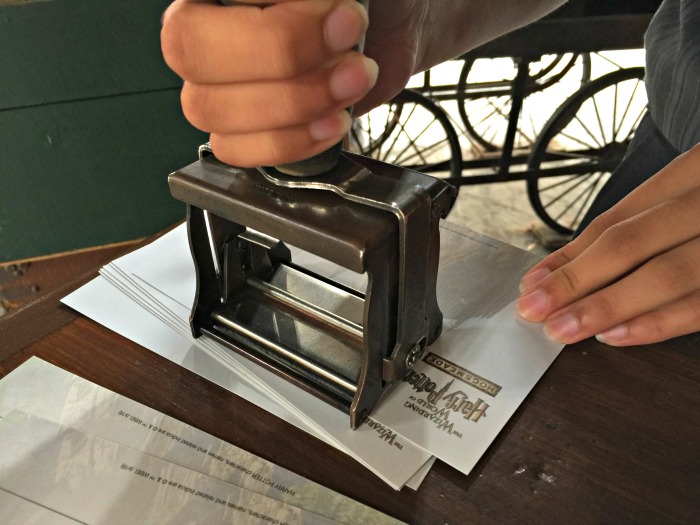 The wonderful lady at the kiosk gladly added the postmark to all our postcards. 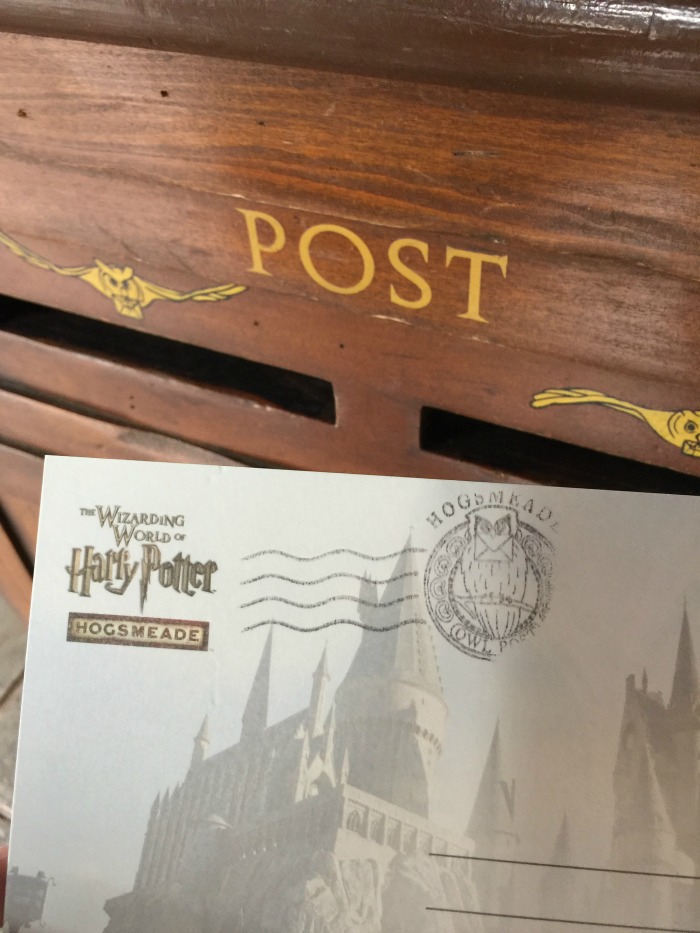 We only mailed a few postcards that day from inside Hogsmeade™, but we certainly had her postmark all 10 of our postcards. 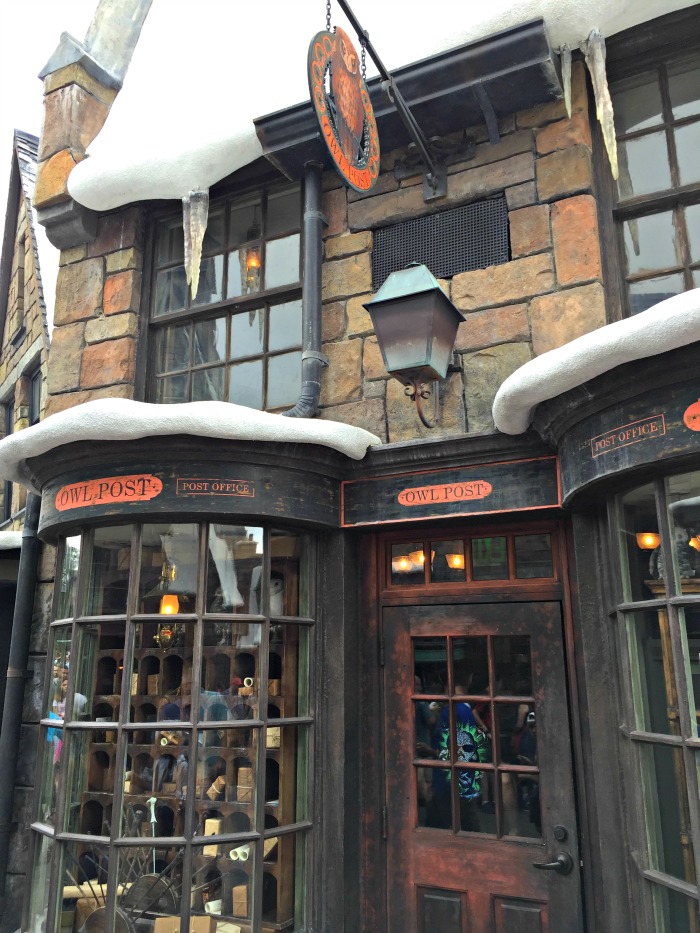 Owl Post – a not so hidden treasure within The Wizarding World of Harry Potter™ that we loved.

Be on the lookout for more posts and tips for a visit to Universal Orlando and The Wizarding World of Harry Potter™ as I continue this series, some already written about below).

YOU WILL ALSO LOVE THESE UNIVERSAL HARRY POTTER POSTS: 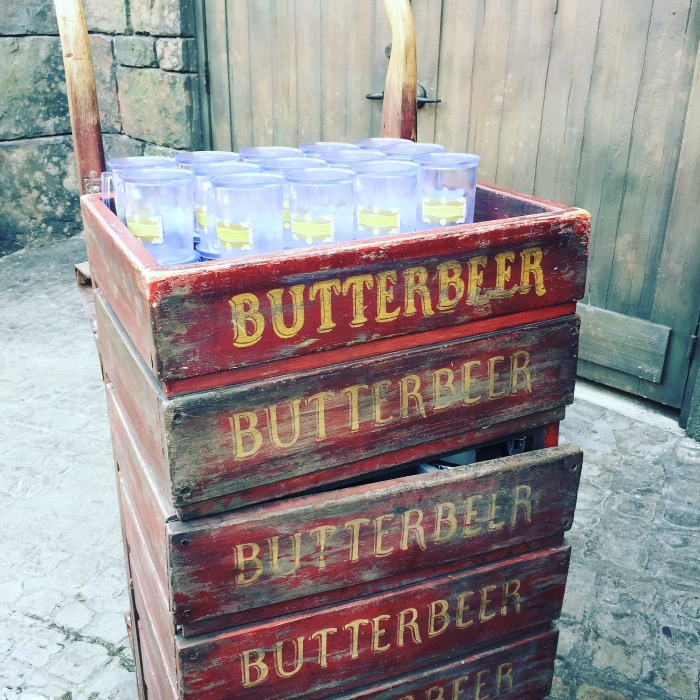 MUST TRY – Which is Best Butterbeer at The Wizarding World of Harry Potter™?