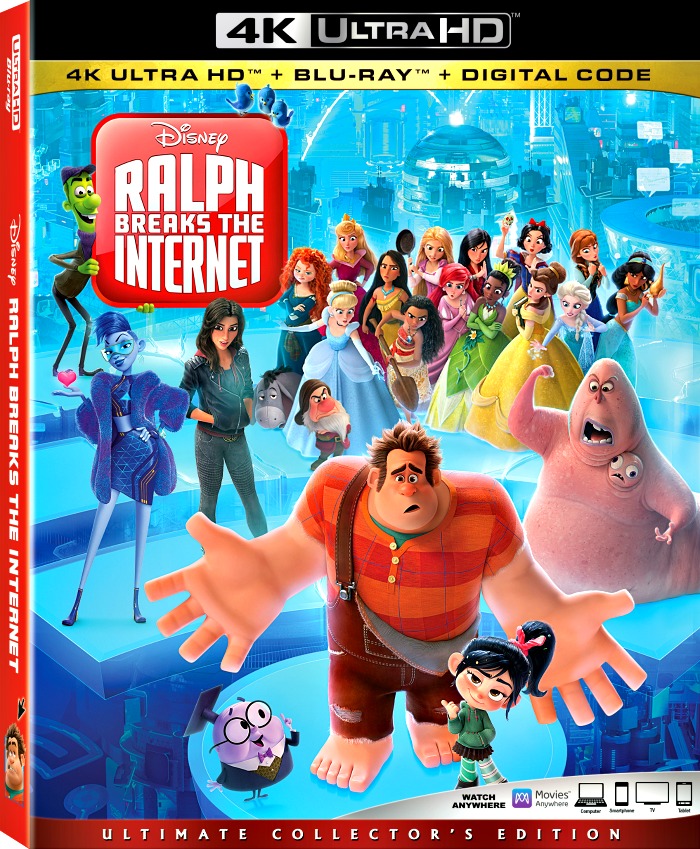 Are you ready to take Disney’s Ralph Breaks the Internet home?

Thanks to my friends at Disney, I already have and I want you to get a copy too! You need some smiles and laughs this month and Ralph, Vanellope and the gang are sure to bring it out of you. Read on, as I’ll discuss the home release scoop, bonus features, and host a Ralph Breaks the Internet Giveaway for two (2) lucky winners as well!

Complimentary Disney promotional items provided at a previous blogger event. Affiliate link in post – if any purchases are made through links, a small commission may be earned at no cost to you.

Ralph Breaks the Internet is available to come home on Digital 4K Ultra HD™ and Movies Anywhere on Feb. 12 and 4K Ultra HD and Blu-ray™ on Feb. 26.

This just comes months after the movie aced to a number one opening weekend (2nd biggest Thanksgiving opening of all time)! WOO HOO!

Directed by Rich Moore (Academy Award Ò-winning “Zootopia,” “Wreck-It Ralph”) and Phil Johnston (co-writer “Wreck-It Ralph,” “Zootopia,” writer, “Cedar Rapids”), and produced by Clark Spencer (“Zootopia,” “Wreck-It Ralph,” “Bolt,” “Lilo & Stitch”), “Ralph Breaks the Internet” welcomes back favorite cast and characters introduced six years ago, including Reilly, who provides the voice of Ralph, and Silverman, who returns as the voice of Vanellope. Lending a virtual hand to Ralph and Vanellope is Shank, voiced by Gal Gadot, a tough-as-nails driver from a gritty online auto-racing game called Slaughter Race, a place Vanellope wholeheartedly embraces — so much so that Ralph worries he may lose the only friend he’s ever had.

Yesss, voiced by Taraji P. Henson, the head algorithm and the heart and soul of the trend-making site BuzzzTube, makes Ralph a viral sensation. Jack McBrayer and Jane Lynch return as the voices of Fix-It Felix Jr. and Sergeant Calhoun, respectively, and Disney Animation’s good luck charm, actor Alan Tudyk was called on to voice a search engine named KnowsMore — literally a know-it-all — who runs a search bar and helps Ralph and Vanellope on their quest. Lots of exciting cameos are also featured in the film including a scene that reunites all of the original (living) Disney Princess voice cast.

If you haven’t seen it, now is your chance. It will not disappoint and that princess scene (yes, every Disney princess) is soooo worth it!

GRAB A COPY: Available  on Amazon and other retailers everywhere. Thanks to my friends at Disney, I’ve got 2 Digital Copies to give away of this movie!