There are so many incredible Netflix Originals to watch as we are heading out of 2019 and if you haven’t yet discovered this new series, it’s time. I’m talking about The Dark Crystal: Age of Resistance.

Sponsored post. Affiliate links in post, where a small commission may be earned at no cost to you.

The Dark Crystal: Age of Resistance is a 10-episode puppet-filled prequel to the 1982 classic cult film and follows three Gelfling who discover the horrifying secret behind the Skeksis’ power and set out on an epic journey to reignite the fires of rebellion and save their world.

The Dark Crystal: Age of Resistance Books (and Giveaway)

Discover the lore, legends, heroes, and villains of Thra with all new books. 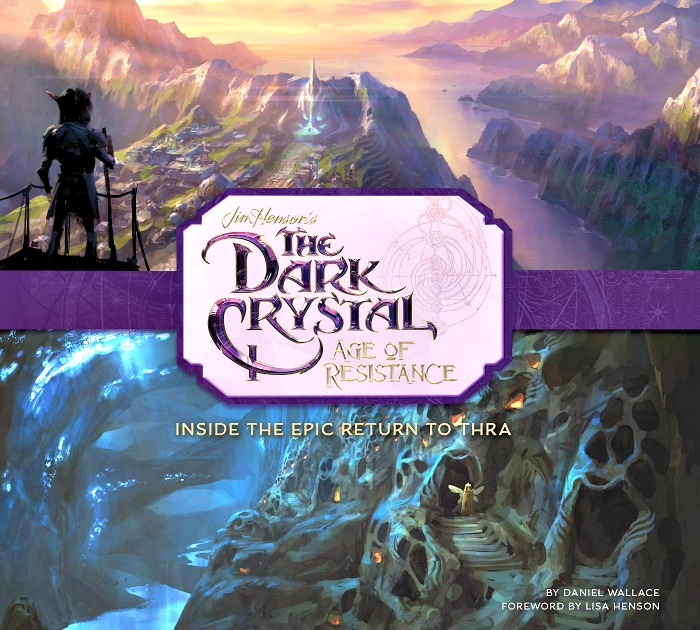 From Insight Editions is The Dark Crystal: Age of Resistance; Inside the Epic Return to Thra. Written by Daniel Wallace, with a foreward by executive producer Lisa Henson, this book reveals the incredible creative process behind the new series—how Jim Henson’s Creature Shop, legendary character and costume designer Brian Froud, and director Louis Leterrier brought Thra and its characters to life alongside the many artists and puppeteers who are continuing the legacy of the original film. Filled with exclusive cast and crew interviews, concept art, set photography, puppet designs and more, this is the definitive exploration of The Jim Henson Company’s epic return to Thra. You can find a copy of the book here.

And for comic book fans, from Boom! Studios is Jim Henson’s The Dark Crystal: Age of Resistance, a 12-issue official prequel to the Netflix series. Return to another world, another time, Before the Age of Wonder. The Skeksis rein over Thra, but there are distant echoes of rebellion. Gelfling and unlikely heroes emerge to champion what is good and just, but their paths to legend started long ago. Epic tales of adventure, magic, and mystery send us back in time to the Age of Resistance to witness the untold histories that forged these protectors of Thra. Based on a story by The Dark Crystal: Age of Resistance series writers, Will Matthews & Jeffery Addiss, writer Nicole Andelfinger (Lumberjanes) and Matias Basla ( Sparrowhawk ) tell the tale of the mighty Ordon and a young Fara on an impossible quest. An all-new arc from writer Adam Cesare and artist French Carlomagno spotlighting Hup, the heroic Podling, debuts on January 15, 2020 and you can find at local comic book shops (comicshoplocator.com) or at the BOOM! Studios webstore. Digital copies available from content providers, including comiXology, iBooks, Google Play, and Madefire. Individual issues Ages 12+. 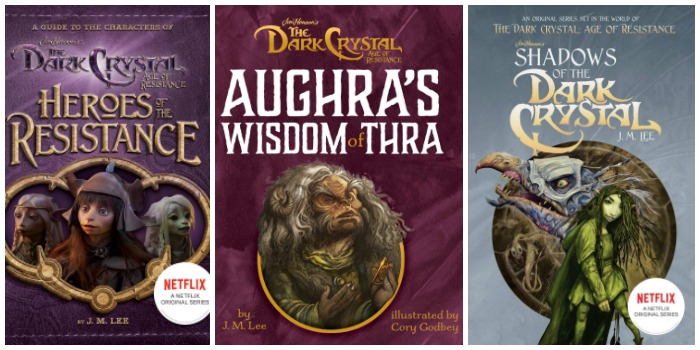 From Penguin Random House are three books by J.M. Lee, a staff writer on The Dark Crystal, Age of Resistance. Lee, who holds a degree in linguistics, also created the Podling language featured in the Netflix show. He is the author of a four-book prequel series that ties directly into the plot and setting for the Netflix series, as well as several other Dark Crystal tie-ins. The novels came about after Lee won a writing contest co-hosted by Penguin and The Jim Henson Company—The Dark Crystal Author Quest. New titles from Lee this season include:

Heroes of the Resistance: A Guide to the Characters of The Dark Crystal: Age of Resistance. This visual character guide, featuring stunning full-color photos from the show, will have readers feeling as knowledgeable about the world of Thra and its inhabitants as the wise and all-knowing Aughra. Hardcover; Ages 12+. You can find a copy of the book here.

Aughra’s Wisdom of Thra. A 40-page companion gift book, with lush illustrations by artist Cory Godbey, that transports readers into the legends and lore of The Dark Crystal’s expansive mythology. Aughra is a feisty three-and-a-half-foot creature with ram horns, a detachable eye, and secrets to an entire fantasy universe, who guides readers with wisdom beyond this realm and advice only she can give. Hardcover; Ages 12+. You can find a copy of the book here.

It’s these last 3 books that I’m giving away to one lucky reader!