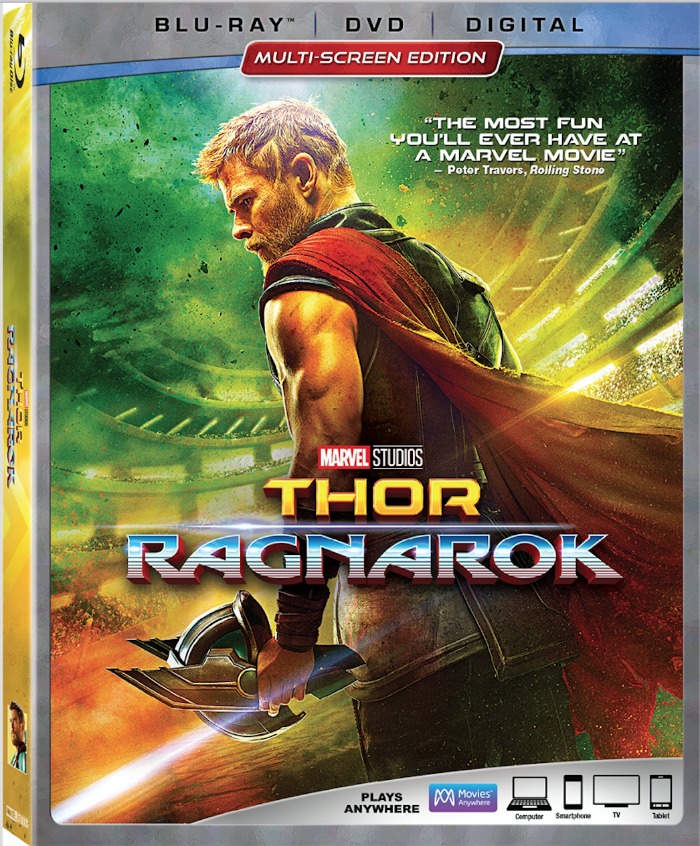 It’s been such a big couple of weeks for Disney and Marvel fans! First, the big news hit that the date for Infinity War has moved up. And then, the release of the Thor Ragnarok BluRay happened! Oh, this Marvel girl is happy!

A huge thank you to my friends at Disney and Marvel for providing a copy to me and my giveaway winners. Oh, yes, 2 winners will win. Read on! (Affiliate link in post)

Now available on 4K Ultra HD™, Blu-ray™, DVD and On-Demand! Check out the deals on Amazon!

Marvel Studios’ “Thor: Ragnarok,” the God of Thunder’s third installment in the Marvel Cinematic Universe, electrified both audiences and critics alike reaching over $845M at the global box office. Now the colorful cosmic adventure, loaded with action, humor, drama and spectacle, has burst into homes.

In Marvel Studios’ “Thor: Ragnarok,” Thor (Chris Hemsworth) is imprisoned on the other side of the universe without his mighty hammer and finds himself in a race against time to get back to Asgard to stop Ragnarok – the destruction of his home world and the end of Asgardian civilization – at the hands of an all-powerful new threat, the ruthless Hela (Cate Blanchett). But first he must survive a deadly gladiatorial contest that pits him against his former ally and fellow Avenger – the Incredible Hulk (Mark Ruffalo) – and grapple with his silver-tongued adopted brother Loki (Tom Hiddleston), the fierce warrior Valkyrie (Tessa Thompson) and the eccentric Grandmaster (Jeff Goldblum).

Let’s take a look (I love this scene)!

Before you enter my giveaway below you might also want to check out my friends Sara’s movie review so you’ll know age appropriateness, etc.

BONUS MATERIAL (may vary by retailer):

Want to get caught up on all things THOR?

Want to get caught up before Infinity War in April?