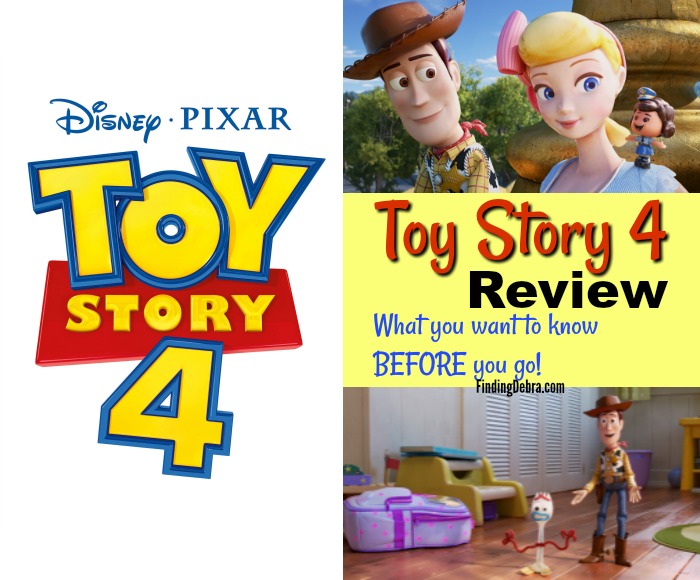 To kids born within the last 30 years, these names are as magical as Mickey and Minnie. It’s why so many of us have flocked to Disney World’s Toy Story Land since its opening last year. These characters remind us of our childhood, and moments that are forever etched in our hearts.

When Toy Story 4 was first announced, I think many of us had mixed emotions. Am I right? We wanted, maybe even needed without realizing it, to know what our friends were up to. When Toy Story 3 ended, we thought it truly was the end. Andy had grown up, and handing over his toys to Bonnie was raw and emotional.

In reality, we realized it wasn’t just Andy who had grown up. We had too. And it stung more than a little. 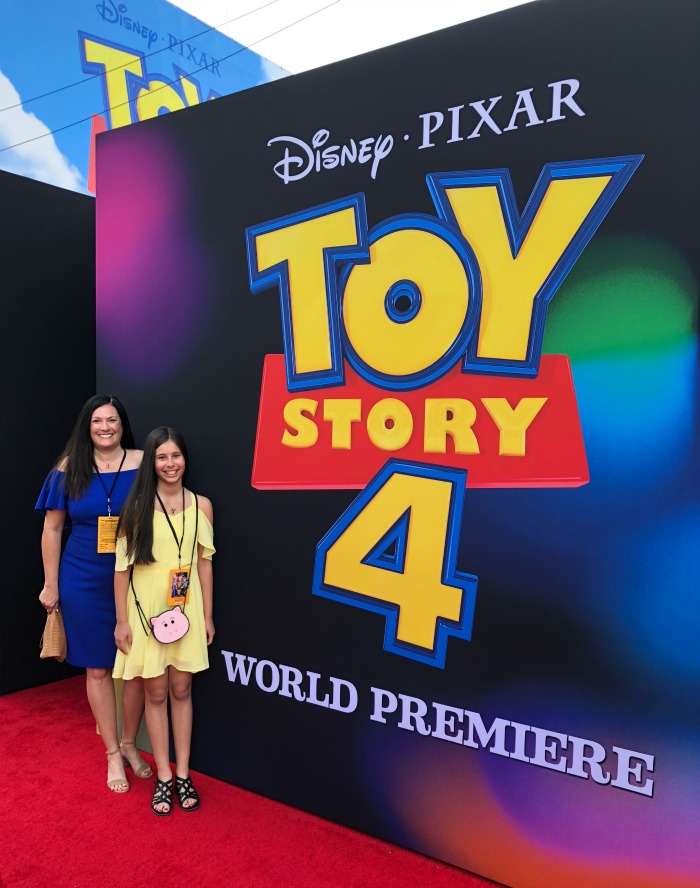 (Disney invited me to attend the world premiere of Toy Story 4. As always, all opinions are my own. Affiliate links in post.)

Last week I attended the world premiere of Toy Story 4 in Hollywood with my 11-year old daughter. We walked the red carpet just steps away from Buzz Lightyear himself, Tim Allen. We sat just rows in front of Bo Peep, Annie Potts. We left the El Capitan Theatre and literally rubbed shoulders with Woody, Tom Hanks, as he exited through a VIP side door.

It was the experience of a lifetime, and I was there to take it all in and decide if Toy Story 4 lived up to what we needed it to be.

Know Before You Go

Before I delve into my thoughts on Toy Story 4, there are a few things you should know before you go.

Will Young Kids Who Haven’t Seen All the Movies Enjoy It?

If you have time, knowing the movie is in theaters Friday, June 21st, I would highly recommend having anyone who isn’t up to speed on the story, watch the the complete Toy Story movie collection.

Is it vital to have seen all the movies? No, but with so many characters in this film, old and new, it sure would be helpful to have an understanding of who everyone is. In Toy Story 4, we do see new scenes from the past played out which will help new fans understand some basics.

What I will say is that the emotional impact won’t be felt if you haven’t seen all the movies.

Will Kids Be Scared?

Without going into detail, there is one new character that is quite creepy. You might have noticed him in the trailer. His name is Benson and he is the ventriloquist dummy (and close ally to Gabby Gabby, the doll).

My 11-year old jumped in one scene, quickly recovering with a laugh. That said, you might want to prepare any young kiddos for the character. Other than that, Toy Story 4 as a whole is not a scary movie in the least. 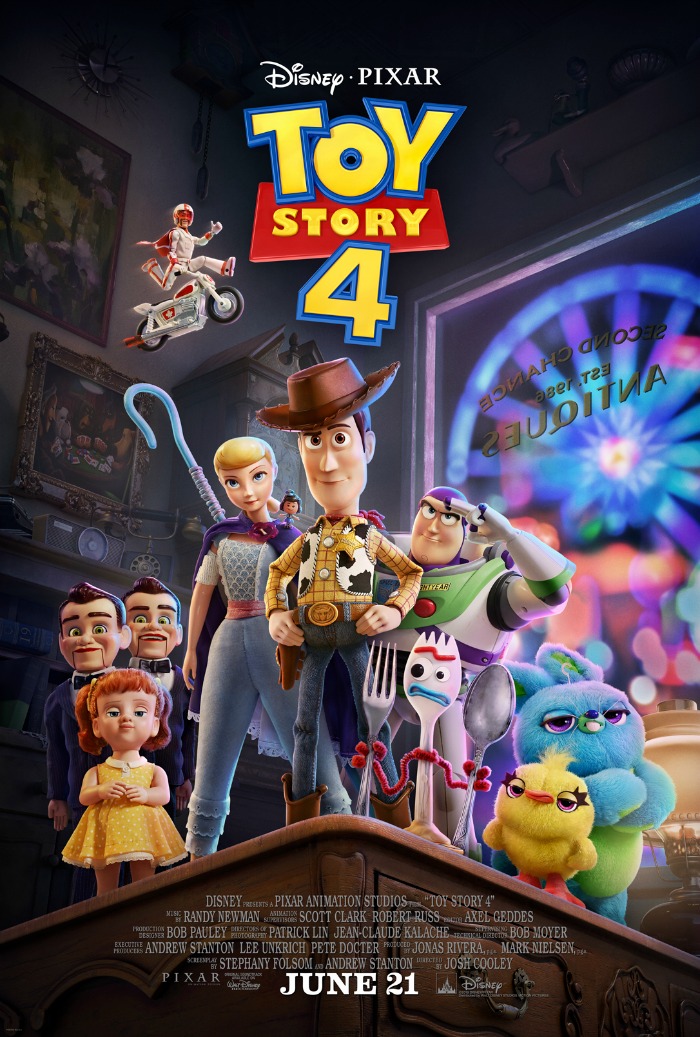 It was clear from the released photos and trailers that this movie would introduce more than just a few new characters.

The poster above shows many of them and I quickly became familiar with many, including Forky (Tony Hale), Duke Caboom (Keanu Reeves), Giggle McDimples (Alli Maki), Ducky (Keegan-Michael Key), Bunny (Jordan Peele), Gabby Gabby (Christina Hendricks), and a few others you’ll discover along the journey.

BUT had I done my homework I would have discovered more than a few gems. I wish I had known these famous actors/comedians were in the movie as they were quick cameos. Thankfully I am seeing the movie again this week and cannot wait to watch a certain scene.

Which new characters surprised me?

TIP: Watch for a conversation in Bonnie’s closet.

Oh yes! This is PIXAR, so you know there will be countless easter eggs in Toy Story 4. I can’t wait to discover even more next time.

A good amount of time in the movie is spent inside an old antique store. Be on the lookout!

TIP: I spied one easter egg reference to “Cars” when Bonnie’s family was on their road trip.

My Thoughts on Toy Story 4

It’s been a long time since “Toy Story” was released – Nov. 22, 1995. Just watch the original movie and take one look at the animation.

“Toy Story” was the first fully computer animated feature film, and it made such an impact on the entertainment industry, marking itself as the highest grossing movie of the year. As I sat there in the theater at the premiere, I was mesmerized at how far animation has come in such a relatively short period of time.

Granted, I’ve had the privilege of interviewing talented PIXAR creators like Alan Barillaro, who directed the PIXAR short PIPER, and learned about new animation techniques that didn’t exist back in 1995. I’ve been fascinated to learn all about how they animate water, and we see some of that in Toy Story 4.

With one close up of Bonnie’s face, I saw how hard PIXAR works. The curves in her eyelashes. The detailing in her freckles.

The kids of the 90s have grown up, many having introduced their own children to the delights of Slinky Dog and Hamm. These kids, well, they have learned that life is all about transition. In Toy Story 4, transitions are happening at every glance, including little Bonnie heading off to kindergarten (and thinking she was completely done after orientation – BIG moment that parents could relate to).

Change. It’s a difficult word for many of us. I myself love routine, and I’ve created a child who delights in adventure, but really doesn’t like emotional change. She was destroyed when we moved. Changing schools was tough on her.

We know in Toy Story 3, things didn’t end when Andy stared into Bonnie’s eyes and handed her these precious toys. Not in the least.

Life goes on. It always does, no matter the circumstances. And that is the big theme of Toy Story 4, to me. It’s not about riding off into the sunset acknowledging a “happily ever after”. It’s about knowing there is another chapter, another story. And finding peace with that.

It’s a lesson that all of us, children and adults alike, struggle to learn and why the creation of Toy Story 4 was almost perfect. (Almost – I’ll explain below.)

Will this mean there is a Toy Story 5? I’ll let you decide once you see the movie yourself.

Not in the least, but I have a small caveat with that statement.

I loved seeing the transformation of Bo Peep, so strong-willed and independent now. I adored the humor Keanu Reeves brought to Canada’s greatest stuntman, Duke Caboom. I laughed my head off every time Forky moved. And I fell in love with Woody and his big heart all over again, like I always do.

BUT there were two things I wish could have been different.

I wish some of the older toys had more screen time, as challenging as that might have been for PIXAR.

And the ending. I’ll be honest – I wasn’t expecting it. Looking back, maybe I should have been. Bring a tissue. That said, I needed maybe five more minutes added to the ending. The end of the movie happened too quickly for me, and you’ll understand once you see the movie (come back and talk with me).

Toy Story 4 has such heart, with unexpected moments of sweetness, and others which bring back that familiar lump in your throat.

Woody (voice of Tom Hanks) has always been confident about his place in the world, and that his priority is taking care of his kid, whether that’s Andy or Bonnie. So, when Bonnie’s beloved new craft-project-turned-toy, Forky (voice of Tony Hale), declares himself as “trash” and not a toy, Woody takes it upon himself to show Forky why he should embrace being a toy. But when Bonnie takes the whole gang on her family’s road trip excursion, Woody ends up on an unexpected detour that includes a reunion with his long-lost friend Bo Peep (voice of Annie Potts). After years of being on her own, Bo’s adventurous spirit and life on the road belie her delicate porcelain exterior. As Woody and Bo realize they’re worlds apart when it comes to life as a toy, they soon come to find that’s the least of their worries. Be sure to visit my friend Sara’s post – she has made the most incredible Forky Cookies! She’ll take you step by step in this tutorial.