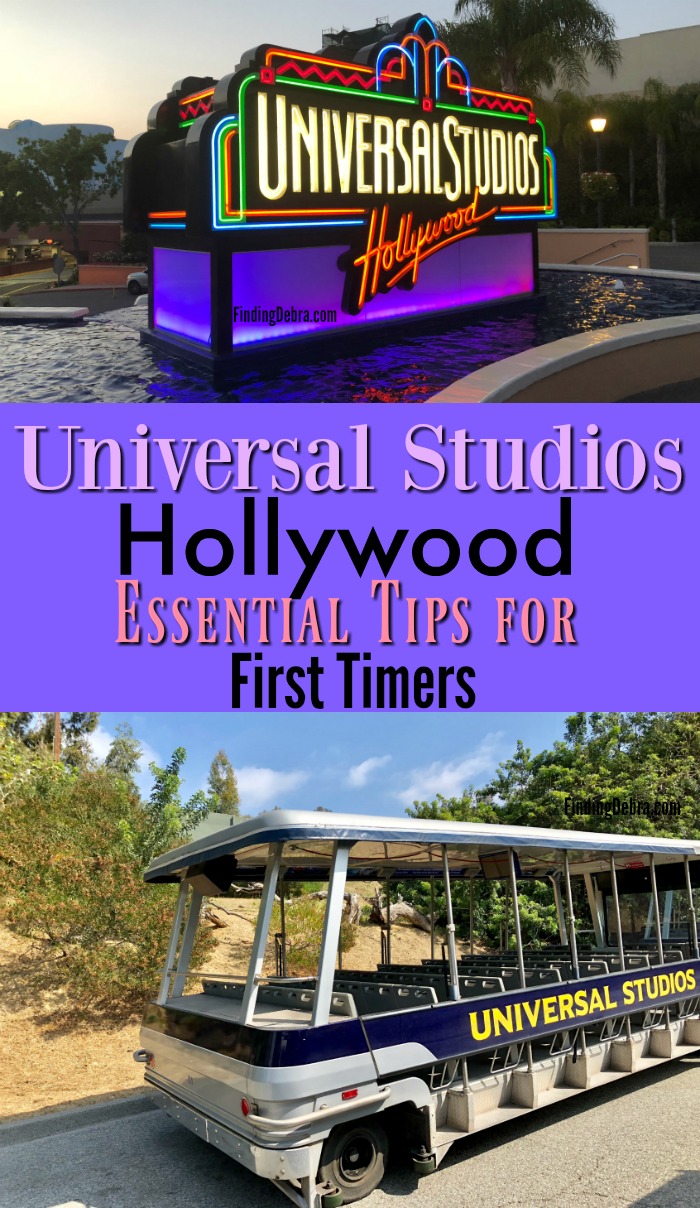 (A big thank you to Universal Studios Hollywood for providing complimentary media passes while we were in town. Affiliate links are included in post, where I may receive a small commission if any purchases are made, at no cost to you.)

Having visited the park many times (over the course of many decades), I’ve seen first hand how the park has changed over the years.

I still remember the first time my grandfather took us on The World-Famous Studio Tour. Of course back then it looked a little different (and might have had me screaming with the sight of Cylons from the original Battlestar Galactica)! I’m definitely aging myself here. Ha!

While some things have most assuredly changed, and you’ll often spy wizards and muggles walking about, some things remain the same. It’s those things that tugged at my heartstrings this summer as I took my daughter to Universal Studios Hollywood for the very first time. 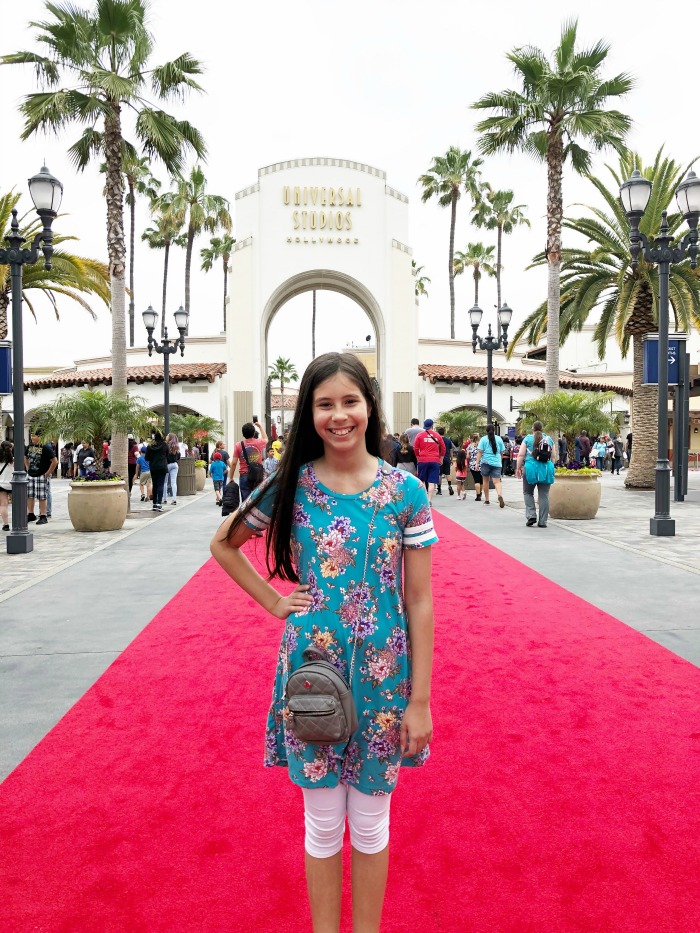 Settled minutes away from the hustle and bustle of Los Angeles, this park definitely has that “Hollywood” feel to it.

It’s one of the many reasons you must visit even if you’ve been to Orlando. The Hollywood theme park is one of a kind and quickly welcomes you with a chance to walk the red carpet at the entrance, something I’ve been known to do in real life from time to time. The perfect California photo opp.

With there being just one park to navigate, deciding which ticket option is much easier.

I choose aRes Travel, a Universal Studios Hollywood authorized seller, which offers discounted tickets and deals throughout the year.

Check out these –>  Best Ticket Deals! Looks like there is an incredible Buy 1 Day, Get 1 Day FREE offer now through September 29th. Check them out for details and my explanation for why you need the Universal Express Pass below. Keep reading.

Built on the Side of a Hill

Unlike many theme parks which are situated on flat grounds, you’ll discover that Universal Studios Hollywood is literally built on the side of a hill. You’ll find incredible views overlooking Burbank.

In addition to a unique location, the theme park boasts an Upper Lot and a Lower Lot. Connecting the two is a massive system of steep escalators (and stairs). Be sure to keep an eye on your young kids, as some like to think of the escalators as an attraction in and of itself. 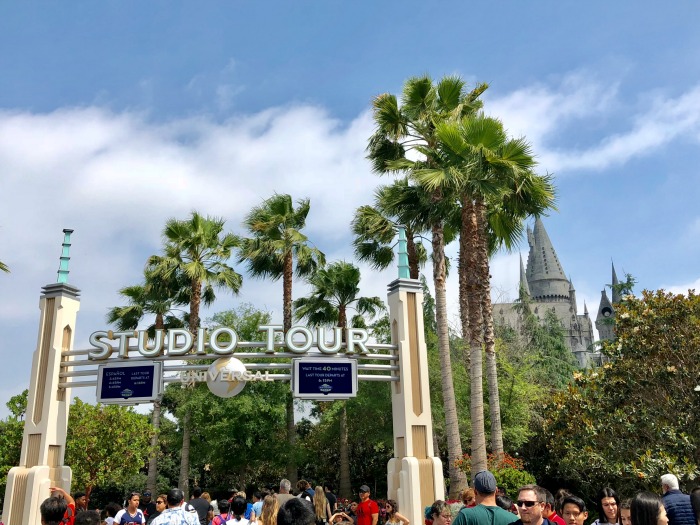 The biggest and most surprising difference to visitors about this theme park is that it is inside and part of an actual working studio lot. Universal Studios is a studio, after all, where movies are made and television series are shot. It’s been that way for decades. This is something you won’t find in Florida and is quite a treat for movie fans and celebrity watchers.

You’ll find the entrance to the famous Studio Tour on the Upper Lot.

TIP: Be sure to watch your time and note when the last tram leaves for the day, as this is one you don’t want to miss. There are no restroom stops on the tram tour, which takes approximately an hour.

The Studio Tour is one of my favorite memories from visiting Universal Studios Hollywood as a child. There are surprises on every tour, so be on guard. You will definitely see favorite things like automobiles which have been in the movies or television (ex. Tom Selleck’s Ferrari from Magnum P.I.), and the shark from one of the scariest movies ever shown in theaters – JAWS!

That said, there are parts of the Studio Tour that change daily. That’s because they are filming here. Yes, you will head down via tram to the lower grounds, where you might just catch some filming going on. While we were there this summer, we had to be silent as we passed by filming with Ted Danson and Kristen Bell for their television series, The Good Place.

TIP: Keep an eye out as you never know when a celebrity will cross the street. Seriously!

Even if you happen to visit on a day when filming isn’t happening, you will pass by a number of outdoor sets you’ll recognize, like the town square from Back to the Future or a New York City street in a Marvel film. The tram will drive you through some incredible backdrops. During our recent tour, it was pointed out when we were driving through were Brad Pitt and Leonardo DiCaprio had been filming just weeks before. 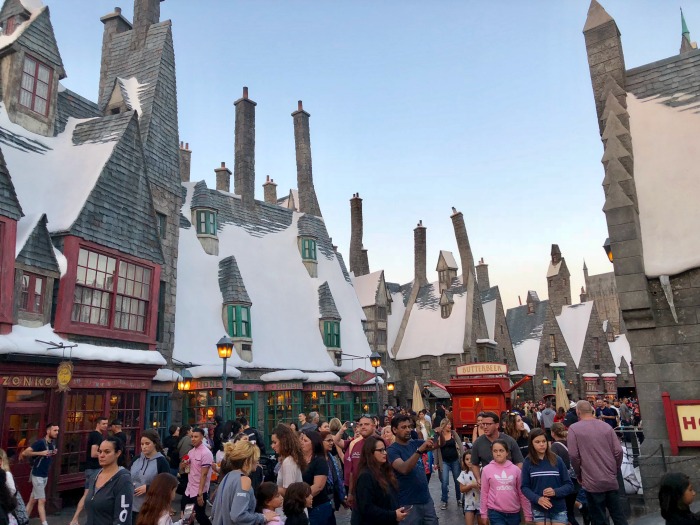 Remember I mentioned the wizards and muggles walking around Universal Studios Hollywood? Fans everywhere love that there’s a Wizarding World of Harry Potter on the West Coast.

If you are anything like me the first time you visit, you might just want to stay one entire day in this section of the park. It can be done. Ask me how I know?

Even though Universal Studios Hollywood does not have a Diagon Alley or an actual Hogwarts Express to ride (that is one advantage to visiting Florida, since they have Harry Potter fun in two theme parks), there is so much to do and see. AND EAT!

You must try Butterbeer. Thankfully, I’ve already done the research for you, as there are many different ways to enjoy it –> Which Butterbeer is Best?

TIP: In California, unlike Florida, it tends to cool off at night. Try the Hot Butterbeer in the evening.

Visit Ollivander’s and watch a wand choose a wizard (so worth the wait). At a minimum, you’ll want to consider purchasing an interactive wand to use in this portion of the park. You’ll be able to test out your skill by casting spells. Plan on plenty of time for this – it’s too much fun!

TIP: Universal Studios Hollywood has a few extra unique spells that I hadn’t seen in Orlando. One just might have you waking a dragon! Another has you casting a spell with the special effect of fire shooting out a chimney!

Send a postcard to a friend with a Hogsmeade postmark. I share details how –> Visit Owl Post

Shop for treats at Honeydukes. Experience Harry Potter and the Forbidden Journey, a ride like no other. And so much more! 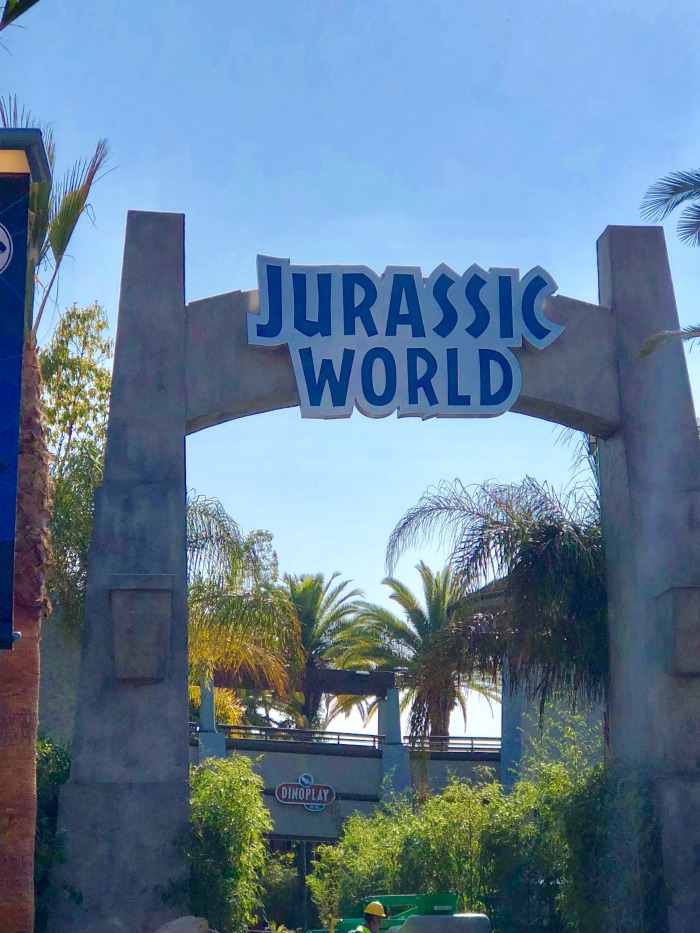 Head to the Lower Lot to experience the thrills of Jurassic World – The Ride, which just opened this summer!

It hadn’t yet opened when I visited, so I can’t wait to experience this firsthand when I return. I remember how great the original ride was, so I can only imagine how much better it will be. With new dinosaurs and ground-breaking technology, it surely won’t disappoint!

Be sure to stop by the brand new Isla Nu-Bar for tropical drinks and say hello to Blue the Velociraptor and a Triceratops at the Raptor Encounter.

TIP: If you have anyone in your party who might not be up to the adventure of Jurassic World – The Ride, be sure to take advantage of the Child-Switch option. 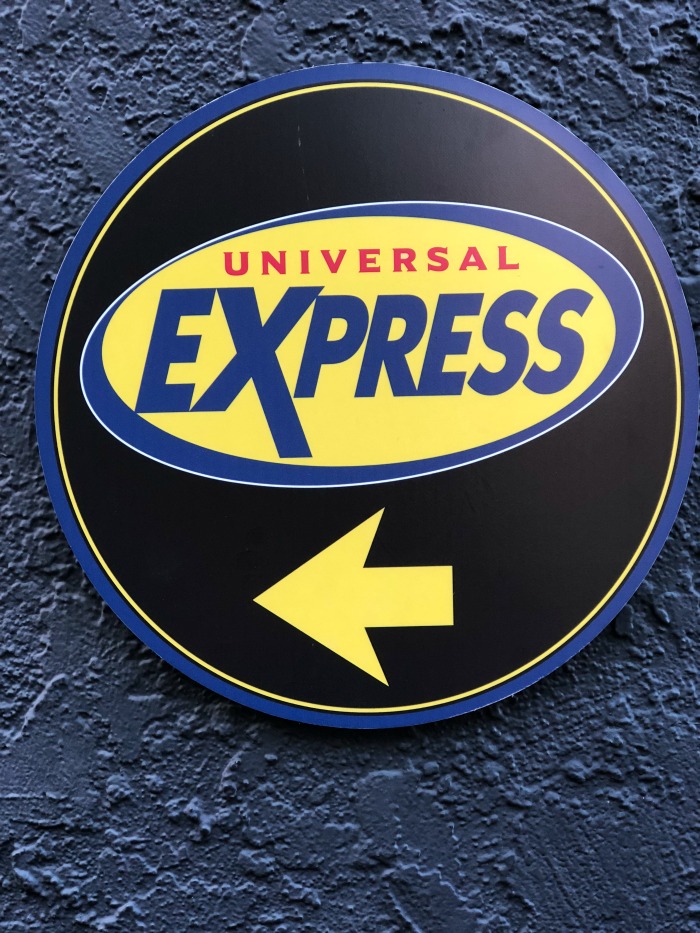 If there is one thing I’ve learned over the years, it’s that time is precious. As much as I LOVE theme parks, standing in line is not my favorite thing to do, especially during the hot summer months.

TIP: Be sure to have a lanyard, as you’ll need to have your theme park ticket readily accessible to use your Express Pass privileges. I snagged a fun Harry Potter lanyard with ID holder!

Look for signs like the one above to find your special entrance.

TIP: When booking with aRes Travel, an authorized Universal Studios Hollywood ticket seller, you can choose the Universal Express Pass option with your purchase –> Best Ticket Deals – CA – Note: I spy an Unlimited Express Pass offer! That means you get express access to each ride, attraction or show as many times as you want. WHOA! 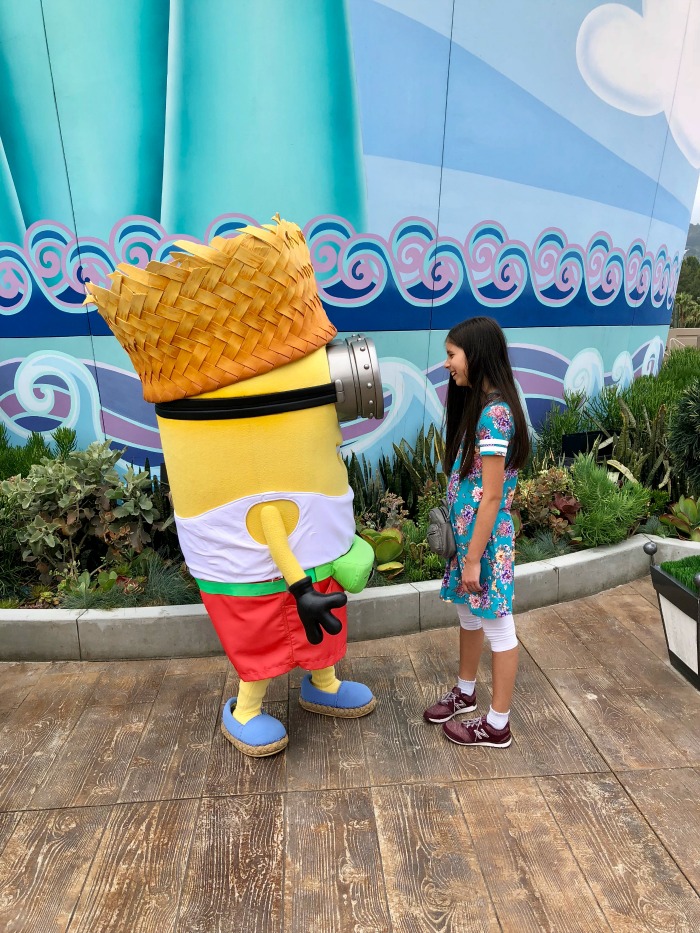 Fun for the Littlest Kids

I’ve been talking about all the thrills at Universal Studios Hollywood, but never fear, there is plenty of fun to be had for the littlest of kids. In fact, there is an entire Minions themed section of the park, complete with an insanely fun splash area.

TIP: Have the kids wear something that can get wet or they can change out of. 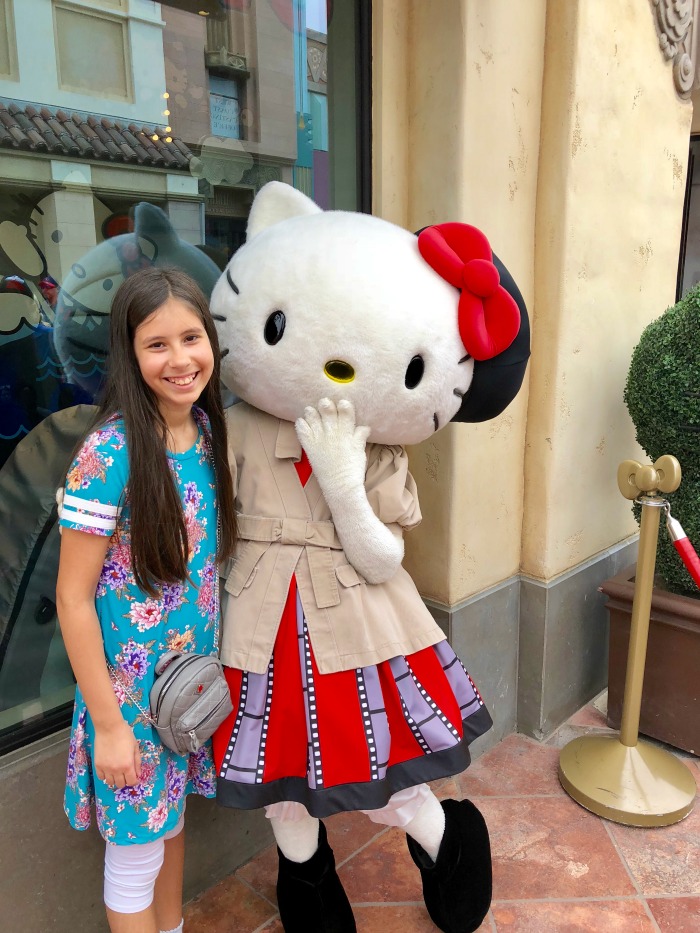 From Minions to Hello Kitty, and Shrek to Trolls, you will run into some of your favorite characters during a visit. Have your camera ready for photo opps. And be ready, as kids are selected from the audience at the Animal Actors show – what an memorable experience that would be!

Don’t miss out on some of the best fun there is to be had in Southern California – Universal Studios Hollywood!