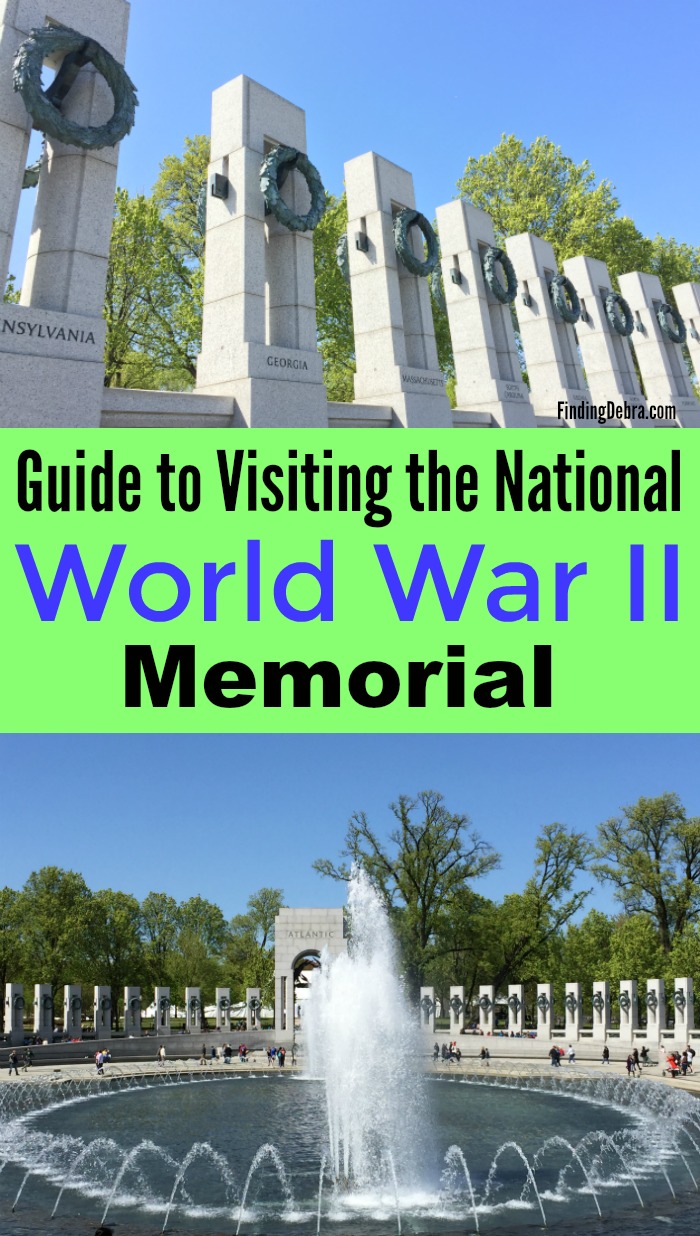 I’ve been to Washington, DC several times as an adult, one trip to seriously consider attending school there when offered a scholarship. Though I ultimately turned that opportunity down, DC has always been special to me.

It’s a city I’ve visited both for business and pleasure, and whether walking among the rows of those who have gone before at Arlington National Cemetery or spending hours enjoying the exhibits at the Smithsonian, it makes a lasting impression on you.

There was one special place on the National Mall which I hadn’t ever stepped foot. It was time to change that. I owed that to my grandfather and to so many others. I spent time visiting the National World War II Memorial. 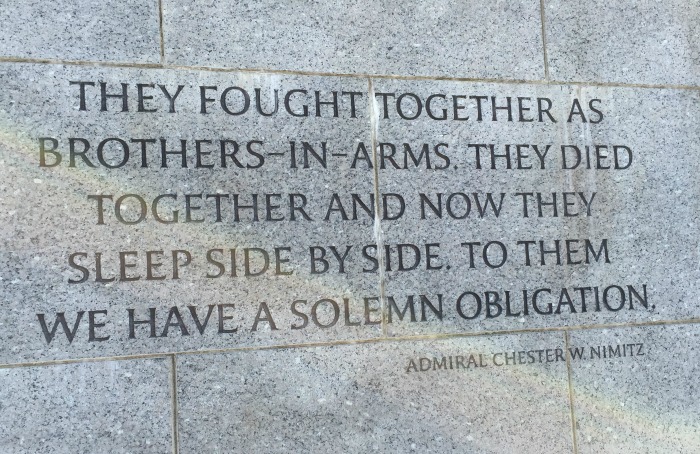 With the Washington Monument to the east and the Lincoln Memorial to the west, the National World War II Memorial honors the service of sixteen million members of the Armed Forces of the United States of America, the support of those on the home front, and the ultimate sacrifice of 405,399 Americans during World War II.

When I think of World War II, it’s personal. I was the oldest grandchild and out of all of us, probably spent the most time talking with my grandfather about his military service.

You could see the pain in his eyes. Though he wrote a memoir (for his family only) with the help of a journal he kept during those years, his eyes told me there were stories he wasn’t sharing. You see, he was in the Battle of the Bulge. And one day, he was captured with his men by Nazi soldiers, and remained a prisoner of war until their liberation.

It was with this background that I walked to the memorial last Spring.

A little over a decade old, the memorial officially opened in 2004 and is operated by the National Park Service.

What I love about all the memorials in Washington, DC, is that they are so accessible (and free). I stayed at a hotel not far from the White House and was able to quickly walk to the National Mall, a national park which is home to the area from the United States Capitol to the Lincoln Memorial and everything in between. It is from here where you can walk to almost everything.

As with all memorials, I tend to get a bit emotional. This one even more so. I slowly stepped up and took in the magnificent view of the Rainbow Pool and it’s beautiful fountains.

Symbolism for this Greatest Generation 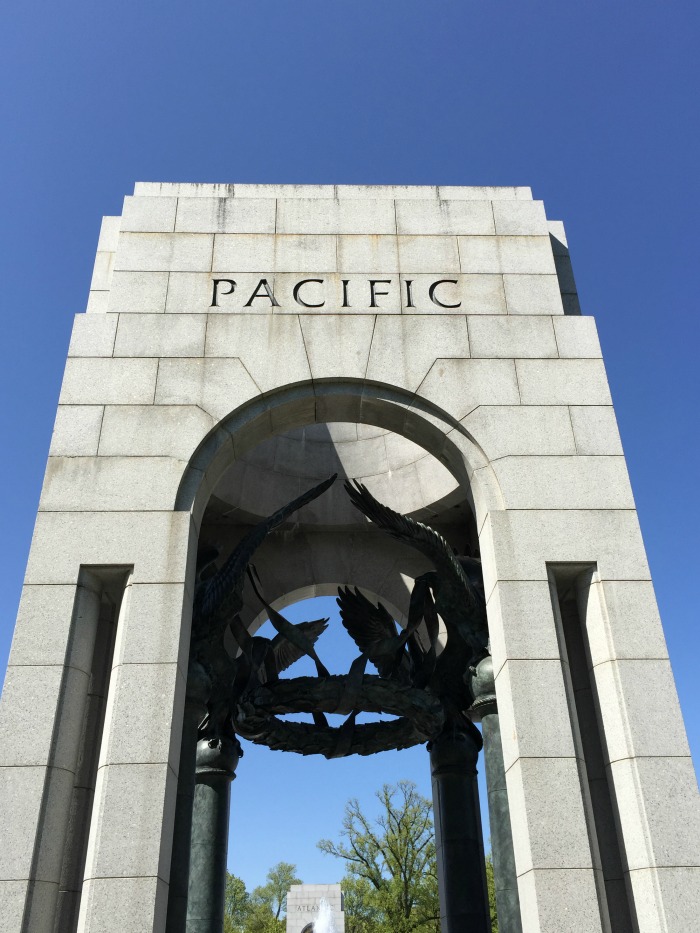 On either side of the Rainbow Pool are two pavilions, one for the Pacific and one for Atlantic – a reminder that this was a war fought on two fronts with many enemies.

On the sides of each pavilion are fifty-six granite columns, representing the forty-eight states, seven federal territories, and the District of Columbia. Bronze ropes tie the columns together symbolizing unity and stunning bronze oak and wheat wreathes are featured.

It’s overwhelmingly beautiful yet I couldn’t help but think of all this “Greatest Generation” faced. 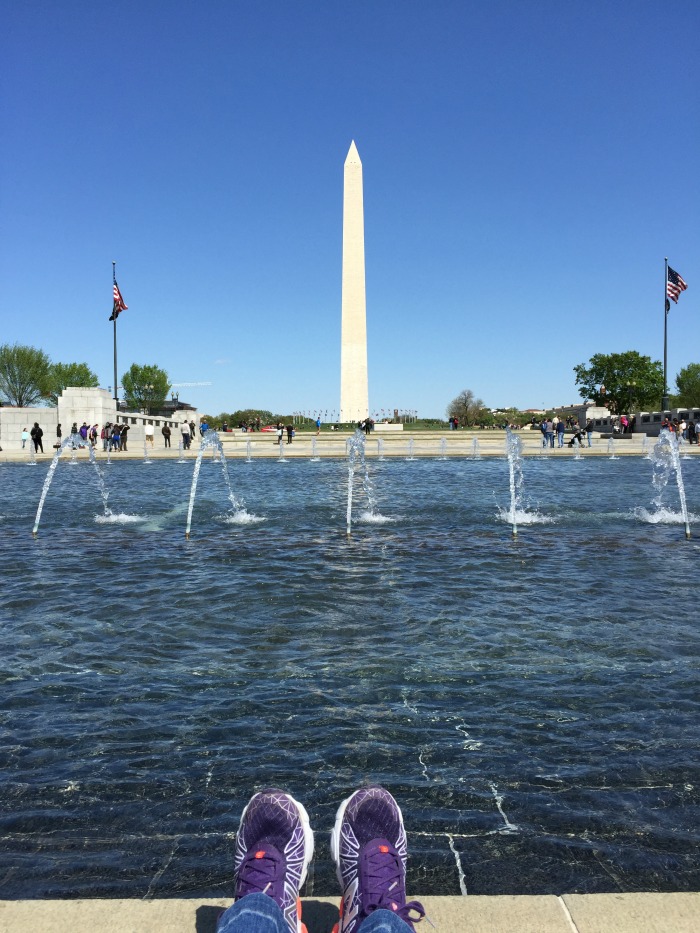 Stunned by this One Act

It was a chilly day, but with a view of the Washington Monument I took some time to sit and reflect. I watched people for a while. So many different generations visiting. Some had stories from their families, no doubt, just like I had.

As always, I was stunned by one thing. It’s the same thing that stuns me when I visit the 9-11 Memorial in New York City.

People smiling for pictures in front of the memorial.

Don’t get me wrong. It’s a beautiful location. It’s a “tourist attraction” to some. But to me it will always seem not quite right to smile for a photo in front of a place which honors those who sacrificed so much. 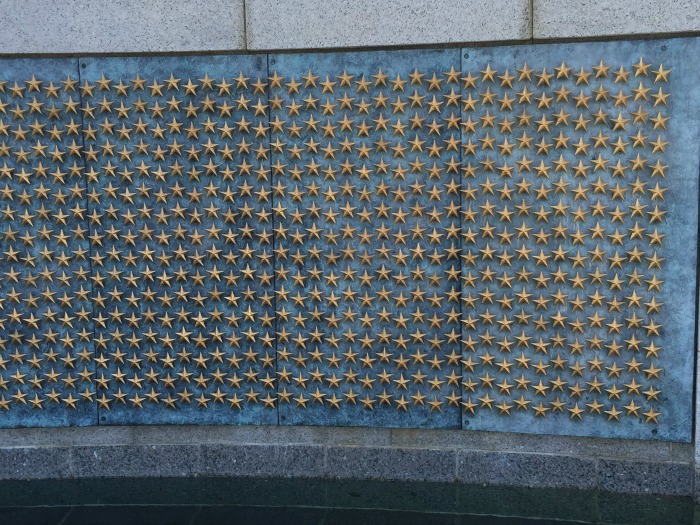 I think about my great-grandmother sending off her boys to war. How hard that must have been, for it was not only my grandfather she sent off, but his brothers as well. The tears she must have cried, especially when receiving a telegram that my grandfather had been captured. But all of her boys came back.

There are 4,048 gold stars at the memorial, each one representing 100 American military deaths.

My grandfather passed away 10 years ago, shortly after the National World War II Memorial was opened. He never had the chance to see it in person. And though I know it would have been incredibly emotional, I would have been honored to stand there with him as he took it all in.

These days, I tell my daughter all about the great-grandfather she never knew and show her one of my prized possessions, a medal he received for his service in the war. But in reality, the prize was that I ever knew him at all. He was one of the lucky ones.

The public may visit the World War II Memorial 24 hours a day. Rangers are on duty to answer questions from 9:30 a.m. to 10:00 p.m. daily and to provide interpretive programs throughout the day and upon request. Learn more here.

Why was I in Washington, DC in the first place? –>  I was invited to The White House!

Have you ever visited Washington, DC? Was your family personally impacted by World War II?